Your Life Should Cause Cognitive Dissonance

“You will know the truth, and the truth will make you odd.” This quip – which is often attributed to Flannery O’Connor but not actually found in any of her works – captures an essential element of being a Christian: absurdity. The encounter with Christ, who is Truth, will make you absurd.

I don’t mean that Christians are irrational. On the contrary, the reason of a Christian is more expansive, for she engages every facet of reality rather than only a portion of it. Nor is the Christian living in another world beyond this one. She lives the truth of human life, the same reality as others, only with a greater depth and intensity.

But it is precisely the reasonableness of the Christian that makes her absurd in the eyes of those who have not encountered Truth. To explain, I will turn to St. Benedict and neuropsychology.

Saint Benedict on the absurdity of love

As I shared in an essay for the Church Life Journal, I am translating an Italian biography of Saint Benedict into English. A passage I recently worked on captures the absurdity of the love of Christ:

One day, Benedict heard that Martin, a hermit famous in the area for the exceptional sanctity of his life, had decided to imprison himself in the cave that he had chosen as his dwelling. By tying one end of a chain to his foot and the other end to a rock, Martin had made himself a rough – if voluntary – jail cell.

Between the Saints there is, at times, a daring intimacy. The abbot of Monte Cassino sent one of his disciples to the hermit of Mount Marsico, with a singular exhortation:

“If you are the slave of God, Martin, it is not a chain of iron that binds you but the chain of Christ.”

These revealing words contain all of Benedict’s soul, the radical spirit of his life and the Rule he wrote for his children. Benedict understands them to be “seekers of God,” men who… are dominated by a great love. The intensity of their love reveals the depth and seriousness of their search, and it alone ensures the monks’ fidelity to the means that will lead them to their end. Without love, if we choose to evaluate it with our banal units of measurement, the life that Benedict proposed to his children – and that he himself lived – is absurd…

The ultimate reason for [the monk’s] absolute obedience, even in the face of something that could seem impossible, is only one: the love of God. The same love will teach the monk to pray for his enemies, to generously embrace, nay, to “guard” the Rule, and to humbly respect his abbot, not for his human qualities but for “amore Christi.” The love of Christ! … How could others, those who do not love, understand the value of this holocaust, which is the highest gift a creature could offer God?1

From the outside, the life of a monk or nun is not only absurd, but downright inhuman. The monastic renounces marriage and family, the most natural expressions of her human affectivity. She renounces every possession and pleasure, even those that would appear good. But above all, she renounces her own will, perhaps that which is most precious to the human person. Why? For love of Christ, who asks these sacrifices of her so that she might live, now, what we will all live in Heaven.

For many, such a life gives rise to cognitive dissonance. In psychology, this refers to the discomfort that arises when a person holds conflicting attitudes, behaviours, or beliefs, or receives new information that conflict them. The psychological discomfort drives the person to resolve the tension by altering a behaviour or belief, or by denying or trivialising the new information. In the brain, this takes place through activity of the medial and dorsolateral prefrontal cortex, as well as the insula. These regions are involved in processing emotion, avoiding discomfort, and maintaining a sense of self.

Face-to-face with a joyful monastic, or indeed any Christian who radiantly lives the Gospel, any atheist would experience a bit of cognitive dissonance. On the one hand, he may be firmly committed to the belief that Christ does not exist. But on the other, he sees that one who gives her whole life to Christ is more alive than he. It is absurd!

Of course, true witness never overwhelms the freedom of the other. Indeed, the atheist can always choose to resolve his cognitive dissonance by denying or trivialising the transfigured life of the Christian. But wouldn’t this be unreasonable, a narrowing of the scope of reality that he is willing to look at? Would it not, therefore, diminish his very humanity? Yet such is our freedom.

Christ was quite aware of the absurdity of His own life. Son of a virgin mother, Christ the King entered the world as a helpless infant in a bleak cave. Son of God, He freely offered His life to save the weak and rebellious humanity that He loved. It’s “horrifying,” as Nietzsche succinctly proclaims in AntiChrist.

So, too, does Christ proclaim an absurd Gospel. How could the kingdom of heaven belong to the poor and the persecuted? Is it possible to love one’s enemies? How would those who renounce everything for the sake of the name of Jesus receive a hundredfold in return? What is the resurrection, and how can we have hope in something – Someone – we have never seen?

Even Christians feel the absurdity of their beliefs at times. It is a reminder that our faith is not something we generate; revelation is a mystery that is only partially unveiled. But whenever we catch an additional glimpse of the dizzying strangeness of our faith, it is the opportunity to say “yes,” once more, to the calling of Christ who is Truth. And He gives us His strength to live a life that would be absurd if not for His existence, absurd if not for His love.

During stay-at-home orders this spring, I enjoyed listening to “Let Love,” a podcast created by the Sisters of Life. Each episode, they explore another way that each of us can allow the love of God to enter and transfigure our lives. Adopting the pattern of their litany of invitations, I invite you to let love make you absurd. Let Christ so transform your life that others cannot understand it except in light of the Gospel.

You can send me your podcast recommendations, questions about St. Benedict, or ideas about witness at synapsesofthesoul@gmail.com.  I’ve also got a quarterly newsletter that you can subscribe to here.

[1] Please do not reproduce any of this text without written permission. 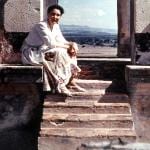 November 8, 2020 My Latest Heavenly Patron
Browse Our Archives
Related posts from Synapses of the Soul

Catholic
The End of Education
Synapses of the Soul

Catholic
Does Your Mind Extend Into the World?
Synapses of the Soul
TRENDING AT PATHEOS Catholic