On Faith and Doubt: A Q&A with Author Kyle Cupp

On Faith and Doubt: A Q&A with Author Kyle Cupp October 31, 2013 Deborah Arca 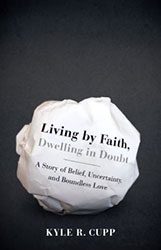 I could hardly contain my tears while reading Kyle Cupp’s new book, Living by Faith, Dwelling in Doubt. His story of the pain of a broken childhood and the loss of a newborn daughter in early fatherhood was shared with so much tenderness, honesty, and aching love, it was almost too much to bear. But I did bear it and am glad, because Kyle’s responses to his heartbreak also held beauty and nourishment for my soul, as he passionately struggles to craft meaning of a life fraught with loss and grief. Cupp reminds us that faith is formed from the broken shards of our lives, and with deep doubt as a regular companion.

Kyle graciously shared some thoughts on his on-going faith journey as part of our Patheos Book Club this month.

What inspired you to write Living by Faith, Dwelling in Doubt? 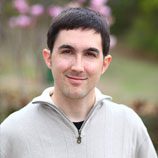 I wanted to share my story as an example of what an uncertain faith can look like. I know there are people of faith who have struggled, as I have, with uncertainties, hardships, and questions that never really go away or find satisfying resolution. In a lot of faith circles, we’re told that doubting is the mark of a weak faith and that maybe it’s okay to have moments of doubt, but you better get back to the strength of surety as soon as you can. Well, if there’s a key to unlocking that door, I haven’t found it. And if it exists, it’s not for me. I’ve gotten the sense that it’s not for everyone.

At what point on your journey did you understand that faith could co-exist with uncertainty? What did that moment feel like for you?

I’ve been writing online for years about the possible co-existence of faith and uncertainty, but working on this book really crystallized for me just how necessary uncertainty has been for my own faith development.  In putting this story together, I had to reflect upon the whole of my faith, tracing it back to what I discerned to be its origins, contemplating the meaning of my faith now, and thinking about everything in between. I discovered that not only has uncertainty and faith co-existed throughout my religious walk, but also that my faith has from the start been a response to uncertainty.  For me, the two don’t just co-exist, they’re intimately related. I found consolation and an added peace in understanding this.  My faith and my doubt belong together. That’s a comforting thought, as Gandalf would say.

You say your faith began not as a religious response to God, but as a way of navigating the uncertainty between the worlds of your parents, one a Buddhist, and one a Catholic. How did this uncertainty shape you as a person of faith?

Foundationally, I suspect. If I were a character in a novel, talking a lot about the uncertainty at the heart of my faith life, the early childhood experiences of a mixed religion household and divorce would make a credible back story. The world of my home began as place of irreconcilable differences. I learned the behavior of trust from my parents, but this trust always meant believing in two people who didn’t agree on matters heavenly and earthly.  Trusting them meant living in tension. Looking back, I think I made peace with this tension. As an adult, when I’ve had my moments of doubting God’s existence or wondering whether any of the stuff said about God really corresponds to something out there, I haven’t felt an overwhelming need to get hold of final answers. You might say I’m at peace with my doubts—with the tension between belief and unbelief in my faith. It’s not that I don’t struggle, but that I feel at home in the struggle.

Your story proposes that faith is gleaned in the shattered pieces of our lives. What do the fragments offer us as people of faith?

The fragments are really all we have. None of us sees back to the point where nothing became something or into the future as far as it goes. We don’t even see everything that’s right before us. When my son comes home from school, he might give me a few words as to how his day went, but that’s often all I get. I have to work with what I have. No one sees the whole. We struggle to make sense of this world we live in having only part of the picture.

The fragmentation of my own life reminds me of this condition, of my limits, and of the possibility that through these pieces I may glean something of the full reality that passes all understanding. In a sense, living by faith means living according to the stories we tell after putting together the fragments of our lives into something new. Religions tell grand stories  Families tell smaller tales, but they’re no less important for that.

The death of your daughter, Vivian, hours after she was born led you to write: “Love is not constrained by time.” Can you say a bit more about that?  What did you learn about love in the 15 hours of Vivian’s life with you?

These were words a friend wrote to me after I announced our daughter’s fatal condition. We didn’t know how much of a life outside the womb, if any, she would have. We didn’t know if we would even meet her, so to speak. As we approached Vivian’s day of birth, my deepest hope was that I could give to her a lifetime of love, a love unconstrained by time, in however much time we had with her. It is my hope now that I was able to do this as I held her, talked to her, helped tend to her needs, and watched as friends and family did the same.  Whether or not I gave all the love I could, I believe that love truly has no time constraints and that love flows in all its fullness in every moment as much as it does over the course of a long life.

The Christian story appeals to me because it’s a love story that embodies the crosses and triumphs of love that I’ve personally experienced. And it’s a comedy, in Dante’s sense, which I guess makes the Gospel a RomCom of sorts.  I dig those.

I don’t go to the Gospel because it explains where we came from or where we’re going. I go to it because it calls me away from the indifference and selfishness to which I’m too much prone. It calls me to make sense of my life in the context of the love life of love itself—and to take this meaningfulness and live it as best I can.

What spiritual practices have sustained you – and continue to sustain you – on your faith journey?

Community sustains my faith, maybe more than anything else. When I’m alone, even in prayer, I don’t feel especially close to God. I feel more filled with faith when I’m with people that I care about, especially when I need to be there for someone, but also when I’m just there. Reading bedtime stories to my daughter, playing video games of Lego sets with my son, watching The Colbert Report with my wife—these small moments of simple company are sacred to me.

What was the hardest thing about writing this book?  And the most life-giving?

The hardest thing?  I’d say telling my story in a way that can speak to others. I’m grateful that I had excellent editors who were able to take my drafts and the completed story and make it into something better.

I found that writing about Vivian, telling her story, short though it was, was the most life-giving. It was my attempt to breathe a new life into her, to make her real to others, to keep her real to me, and to keep my devotion to her alive.

Who do you hope reads this book?  And what, ultimately, do you hope they take away from it?

I wrote it especially for people of faith who wonder if their doubts and uncertainties mean that they should give up the journey. I hope that anyone who reads this story receives some sense that uncertainty isn’t the enemy of faith, but its friend, its sibling even. There’s tension, as there is in any relationship, but isn’t not a tension that necessarily needs to be massaged or taken away.

To read an excerpt from Living by Faith, Dwelling in Doubt, visit the Patheos Book Club here. 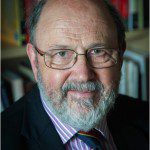 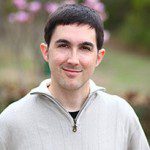 November 4, 2013 Why I'm Thankful for My Doubts
Recent Comments
52 Comments | Leave a Comment
Browse Our Archives
get the latest updates from
Take and Read
and the Patheos
Entertainment
Channel
POPULAR AT PATHEOS Entertainment
1

Common Grace, 2.58-59
Kuyper on the animal world as an analogy of humanity's reliance on...
view all Entertainment blogs
What Are Your Thoughts?leave a comment