Curious about Christianity? A Review of ‘Tweeting with God’ 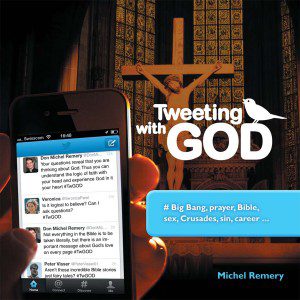 Father Michel Remery, a Dutch priest, has written Tweeting with God, from Ignatius Press, a book to answer some 200 questions on God, life, the Church, and faith. The book will be good for those curious about Christianity, but also for those who have been Christian for years but perhaps have done little to share their faith person-to-person. Long-time Christians sometimes forget that when speaking to others about our faith, we need to realize that people may have an inner hunger for faith, but no vocabulary with which to think about it.

Father Remery seems to realize this. Especially early on in the book, he writes in short simple sentences as he introduces the basics of who God is. Beyond the “tweet” concept of the book is the mind of a Catholic priest who very much wants to reach people, especially those living in a daily environment that has been scrubbed clean of religion, to assure them, in their wariness, of Jesus’ reality, and of Jesus’ love and care for them which is so much greater than their stunted dreams. See especially his “Tweet 1.7, Why Should I believe in God?”
The tweeted questions which appear one question per two-page spread in the book, range in tone from curious to accusatory to skeptical, but Remery takes them all on in patient fashion, inviting people to believe. They may have been told all their lives that belief is for stupid people. Yet, the heart wants what it wants, and something in the human heart _longs_. Instead of rushing to fill this longing with information, Remery, by degrees, invites readers to listen instead to this restlessness or hurt inside, and to consider that it could be God drawing them to himself. If aloneness is a theme of modern life, then the remedy for that is God, who wants to interact with you.
After the touching first section of tweets, the book turns to take a brisk march through history: the popes, the Church Councils, the rise of Islam, the Reformation, Napoleon, and on through (now Saint) Pope John Paul II.
The third section of the book is especially strong in the sections on prayer.
The last section, on ethics, has many “is it right to…” or “is it always wrong to…” questions. The author speaks clearly with a Catholic voice, as he does throughout the book, which has Catechism references in small print for most “tweets.” These are tough questions. One may play with the idea of God, picking up the idea, toying with it, and putting it down again, but ethical issues can be more immediate: we may be faced at any time with decisions on end of life, how to forgive, marriage and so on. But the church has been thinking for a long time, and “Tweeting with God” is a vehicle to bring answers to a culture that has forgotten that.
Jane Dudley lives in Richmond, VA and blogs at www.formafidei.com.
Read excerpts from Tweeting with God – and a Q& with the author – at the Patheos Book Club here!
Previous Post

July 27, 2015 The Paranormal Conspiracy: A Q&A with Author Timothy Dailey
Browse Our Archives
Related posts from Take and Read