Called To Community: A Review 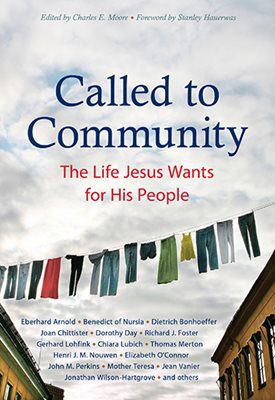 Book publishers spend a lot of time and energy on subtitles. Sometimes titles don’t quite get it as far as letting prospective readers know what they’re getting inside the pages. So it is with Called to Community: The Life Jesus Wants for His People. It’s that word “community.” We have a hard time coming up with a word that describes the quality of life Christians can and should share together. “Community” has always rung stale and sterile to me. Fellowship? Too churchy, tied to potluck dinners. Another problem lies in that many churches simply don’t manifest that quality of living regardless of what they call it. When people don’t know who’s in their church and who isn’t, and when parking lots stand empty ten minutes after the service is over, we’re missing something. A final issue remains in the impression that “community” is something for religiously affected wannabes from the hippie days of the Sixties.

Most of the writers in this collection of essays have lived together with other Christians in some way. They’re unapologetic about suggesting that Christians banding together in intentional groups may be the only remaining way that transformational (personal and societal) Christian living may still happen. Their points are worth a thought — but that’s not the only target audience for this book. The book breaks down into 52 short essays on being Christian together with others and what that means. It’s that way to facilitate a group taking one essay per week to read and discuss together. Certainly individuals can navigate it at their own speed.

Plough Publishers pulls this together and that alone is noteworthy. Plough is an expression of the Bruderhof Communities (bruderhof.com), a group committed to living simply and communally as Christians. Their books and Plough Journal are thought provoking. They pull together an amazing array of voices from every corner of Christendom and history including Dietrich Bonhoeffer, Andy Crouch, Dorothy Day, Fyodor Dostoyevsky, Richard Foster, Soren Kierkegaard, C.S. Lewis, Thomas Merton, Jurgen Moltmann, Henri Nouwen, John Perkins, Eugene Peterson, Mother Theresa, Thomas a Kempis, Elton Trueblood, Jean Vanier and others.

Why churches aren’t more genuinely Christian seems to be a popular theme. Those trashed by churches write memoirs about crawling back to faith. Those who couldn’t get the church to bend their way trash the church saying, “I tried Christianity and it didn’t work, wasn’t for me, is for losers, those hypocrites, etc.” This is one meaty, yet very accessible, book for those who love the Church enough to give it some serious thought knowing that serious thought can lead to serious action. The subheads that group these short essays lay out the main areas – A Call to Community, Forming Community, Life in Community and Beyond the Community. But inside each of those, a detailed breakout of topics digs deep into this thing of Christians living together Christianly whether they live under the same roof or not. For two examples –

“We often try to make excuses for being annoyed. We say it is due to weak nerves (stress) or because we are ‘down’. But irritation and annoyance come from our evil hearts and ultimately have nothing to do with fatigue or weak nerves. Having weak nerves or being overworked just brings out what is really deep down in our hearts…” (Basilea Schlink.)

“Community is caring for people, but of course as soon as we start caring for people, we know that there are some people who will just drive us up the wall… Some we will really like, because they think like us. Then we risk falling into the world of mutual flattery. We are all so much in need of affection that when somebody gives it to us we want to hold on to it. Then we say to the other person, ‘ You’re wonderful! Keep at it! Keep flattering me! You know, it’s nice.’ We’re like little cats who need to be caressed. We then begin to purr.” (Jean Vanier)

Vanier’s pieces are especially good; he gets cited more than any of the other contributors with good reason. Jean Vanier founded what is now known as the L’Arche Communities (larche.org), places where people move in together with others who have intellectual or physical disabilities.

“In community our task is simple and clear. We’re to clean the toilets…Like the janitor when you were in third grade.” (John F. Alexander) I include this not to say that the quality of relationship in our churches stands reflected in the toilets. However, if they need cleaning, this does say something unpleasant. These pages ripple not only with wisdom but with humor. Many of these writers model a loose unfetteredness of spirit that lays nicely and attractively across the pages. We may feel a pinch of conviction while we read but we will also find ourselves thinking, “Mmm. I would like to be like that.”

Whether in small groups or individually, as we read Called to Community, we will be hearing voices from the road, people with trail dust on their faith. They know what they’re talking about. And this invitation to come alongside them is a great place to start finding some new roads in an old faith of our own.

May 16, 2016 The Pursuing God: A Video Q&A with Joshua Ryan Butler
Browse Our Archives
Related posts from Take and Read