God Unbound: Wisdom for the Church in Anxious Times 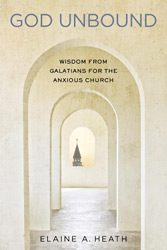 My relationship with the books of the Bible is the same as it is with food: I like some portions more than others. I know it’s all scripture, all inspired. I get it. But over the course of 45 years or so of Christian living, some books just haven’t rung my bell at times. The book of Acts was the first one I remember. And I thought the Psalms were bland for a period of time (shows I hadn’t read very much of them doesn’t it?). Now before the readers convene a church council to exile me to the shores north of the Black Sea (like Athanasius), all of us have biblical books that, at various times in our lives, don’t stand up and dance for us.

Over a long span of years, Paul’s letter to the Galatians has been the asparagus of the New Testament Canon for me. Some kind of “meh” switch flips in my head. So when I opened up the mail to find God Unbound: Wisdom From Galatians for the Anxious Church by Elaine A. Heath, Dean of Duke Divinity School, the “Galatians” speed bump slowed me down just a bit. Christians in the part of Asia Minor known as Galatia were feeling the heat. Not only did they feel the occasional sting of Roman persecution all Christians felt, but since many were converts out of Judaism, often painfully alienating them from family, the hurt ran double and some were even thinking of returning to Judaism. Maybe they started to wonder whether this new Jesus faith was worth it.

I like Heath’s admitting that she had a problem with Paul at first. I thought, “Take a number and get in line.” Interesting to note that the occasion that produced the rethinking of Galatians found here came from Elaine’s involvement in an intentional Christian community practicing spiritual disciplines, hospitality, etc. Even though she might be classified as an “outsider” inside the mainline Methodist fellowship, she found herself on the traditional side being poked by Paul’s arguments. We usually are surprised to discover that we have a chunk of exactly what we say we are not lurking around inside.

She found Paul not bulldozing his way through cherished traditions or trashing former faiths but calling them to a bigger, bolder and richer vision of God than anything they’d known.

God Unbound has a strong missional message aimed at Methodist circles but will fit well with any group, especially within a mainline protestant setting. Instead of beginning with techniques and method as former church growth and some current missional studies do, she begins with God. Well, duh, what else? Seriously. We don’t usually begin with God but with our perceptions of Him. Elaine opens with a chapter entitled “Opening Ourselves to God”. She insists that God actually speaks, makes Himself known. While not a Pentecostal, neither am I a cessationist (all mystical experience and/or miracle ended with the death of the apostles). She is spot on here. She points out that spirituality no longer conveys an image either of the occult or the church. Actually narcissism commands the day and our concoctions of Jesus, Buddha or anything else always seems to have our face. If the God of scriptures lives, it would be unnatural to assume that He never speaks. And what Elaine suggests is that we don’t need more warnings about the excesses that might result but we need better discernment.

Elaine also addresses change. Change is never a problem until it touches something we care about and/or know. And it always does. Just when we think we’ve got Facebook all figured out…well. Depending on how deeply the change goes to the core of who we are, we get anxious. Her response comes in reassuring us that we can trust the Holy Spirit to lead us to all the good God has for us on the other side of the ecclesiastical fence that too easily becomes a concrete wall without even a gate. Especially touching is the last chapter where Elaine shares her heart and expresses her gratitude for the church. This isn’t a trash-the-church book. There are too many of those and they’re too easy. Criticism always is. When we love someone or something, we yearn over it as its best seems to be hardening or sliding away. Good study questions that avoid cheap and shallow conversation end each chapter. The brief text written in a non-scholarly style lends itself to a thorough read by most.

Hmm…asparagus and Galatians. You know what they say. If we don’t like something, it must be because we haven’t had it prepared the right way. While I might not beeline to it right away, God Unbound makes me look at Galatians differently and that is what Elaine Heath aims for. I applaud her love for her part of the Body of Christ.

Read an excerpt from God Unbound at the Patheos Book Club here.

July 25, 2016
What Makes Someone Jewish? A Book Review
Next Post

August 8, 2016 Surface Tensions: A Q&A with Millennial Author Nathan Roberts
Browse Our Archives
get the latest updates from
Take and Read
and the Patheos
Entertainment
Channel
POPULAR AT PATHEOS Entertainment
1