I think it only fair to address your inevitable doubts about the veracity of the following right up front. Friends, everything I am about to tell you is true, even though most of it sounds made up. Remember, I’m a preacher. What are the chances I’d be lying?

The Butler family, into which I have had the vast good fortune of marrying, gathered in Williamsburg, Virginia for a few days after Christmas. The point of such an event, as you might imagine, was to celebrate the holiday together, to allow the young cousins quality time to begin forging relationships that will carry them through the rocky years of caring for us as we age, and to consume vast quantities of my sister-in-law Stephannie’s homemade candy.

In addition to these festive exercises, since this would be, after all, a Butler gathering, this occasion, I knew with deep certainty, would also include large chunks of time in front of the television watching a sporting event. Any sporting event.

Some of us who are not born into such traditions occasionally chafe under their intense expression and try to plan ahead by organizing alternative activities for the family to enjoy. I’m sorry to admit that such is not the case with me. No, after fifteen + years of Butler family celebrations I have pretty much given up. But my sister-in-law Stephannie (she of the fabulous candy), also not genetically Butler, has not yet surrendered to the inevitability of the situation and still lives with hope for change.

This I deeply admire.

So, really, what started all of this was that Stephannie had a vision in which she saw the future . . . and what she saw was all of us crammed into a hotel room at the Williamsburg La Quinta Inn watching football all day long. This vision of the future alarmed her (why, I will never know) this comment inserted here in case any of my in-laws read this. So, Stephannie sent out a mass email to the family suggesting that we all make reservations to attend a colonial dinner at a local plantation.

Well, when she sent out the email suggesting this family adventure, Stephannie mistakenly typed in an incorrect email address for my father-in-law, Allen Butler. Consequently, a very nice man named Albert Butler from Murfreesboro, Tennessee, was included in the family discussion about whether or not to have dinner out while in Williamsburg.

Mr. Albert Butler, who apparently is very interested in family geneology, thought that he had been included on the email list because of recent geneological research. Such was not the case–it was purely a typo–but he was not aware of this. He responded that he would, in fact, enjoy driving almost three hours to have dinner with all of us (who wouldn’t, really?).

Keep in mind, please, that none of us knew Albert Butler. Aside from having the same last name, which, by the way is not THAT unique of a name, there was pretty much no connection whatsoever. (Turns out he’s not even a Baptist–he’s a Methodist!)

Not one to keep silent for very long (can you imagine?) I shot back an email enthusiastically joking that, if Mr. Butler was ready to see the cold, hard reality of his gene pool he should feel free to join us. Hahahahaha. Before anyone could comment further, Albert and his son, Joe (our cousin?) made plans to join us for the plantation tour and dinner.

After laughing hilariously for several days, I decided that this occasion would be a wonderful opportunity for me to observe the family dynamics and come away with some good stories to tell (or blogs to write). And, I also decided I would rejoice in the fact that I am in no way genetically related to this group and therefore would be free to make lots of sarcastic comments under my breath as this whole experience unfolded (which, by the way, I did, joined by others who are not genetically related, like brother-in-law Mark and mother-in-law Virginia. Stephannie was still rather subdued as she was the source of the original email that started this whole thing . . . ).

Well, we did, in fact, go out to the plantation for the tour, which included a tour guide who looked kind of like Minnie Pearl if you squinted in the dim light of the front foyer, a ghost story that had my kids gazing around wide-eyed in terror, and a man lying in bed dressed up with a lacy white sleeping cap on his head (that’s a whole other blog entry . . .). All of these details might have helped Albert Butler seem normal if he’d needed the help. Truth is, he was a very, very nice man who seemed rather chagrined at the mix-up of the situation (which finally came to light after we explained it over dinner).

To his credit Albert gamely soldiered on, declaring that it was very possible we were all related in some way somewhere down the line (Adam and Eve?), and helpfully gave us a copy of his Butler geneology on CD-rom so that in our free time we can all check whether there is, in fact, any common genetic link after all. (I am already carving out time for that, believe me). We told a lot of jokes about Butler personality characteristics (a topic on which the in-laws have quite a bit of expertise and opinion, turns out) and spent quite a bit of time listening to the Butler family members compare notes on the “Butlers of Virginia” (while the rest of us nodded thoughtfully and pretended that there was such a thing).

In the end I am not sure any definitive genetic link was established. But we decided that since Albert and Joe drove all that way just to have dinner with us we should definitely add them to our Christmas mailing list (thank goodness I had not mailed my Christmas cards yet!) and from now on fondly refer to them officially as Uncle Albert and Cousin Joe. 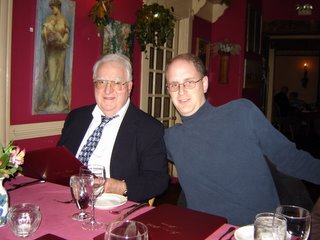 You know, there are a lot of things you don’t think about when you get married. I know I never took the time to consider whether or not my choice of a mate would supply me with good material for my blog. Nevertheless, I have to declare this truth: I really don’t think I could have made up this blog entry.

How lucky am I to be a Butler?

January 7, 2006 I Hate War
Recent Comments
5 Comments | Leave a Comment
"Any updates with the blog ?"
Stanley Sabbath as Radical Witness
"I really, really, really liked this article. Thank you. ♥"
maguilar9855 When God Gets Political: Enough
"To the author/researcher: I am wondering if you uncovered a time when, as Dr. King ..."
Judith March Hardie MLK at The Riverside Church in ..."
"Church is boring."
Ivan T. Errible Sabbath as Relationship
Browse Our Archives
Related posts from Talk with the Preacher