Patheos Explore the world's faith through different perspectives on religion and spirituality! Patheos has the views of the prevalent religions and spiritualities of the world.
Then the angel showed me the river of the water of life, bright as crystal, flowing from the throne of God and of the Lamb through the middle of the street of the city. In the middle of the street of the city, and on either side of the river, is the tree of life with its twelve kinds of fruit, producing its fruit each month; and the leaves of the tree are for the healing of the nations. Nothing accursed will be found there any more. And there will be no more night; they need no light of lamp or sun, for the Lord God will be their light, and they will reign for ever and ever. (from Revelation 22) 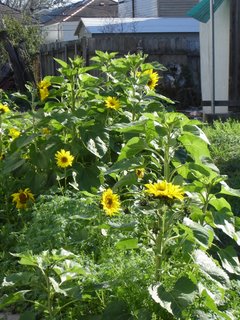 Sunflowers suddenly spring up in an empty lot previously overgrown with weeds. The weeds were trampled by a huge crane, moved in to pull a hundred-year old oak tree off the house on which it had fallen. The trampling of the crane left a bare lot exposed to sunshine.

Years of wishing something could be done with that empty lot and in the aftermath of destruction come, miraculously, flowers. 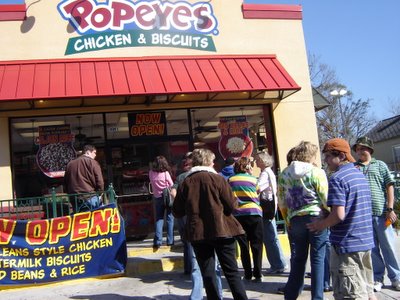 There is no Mardi Gras without buckets of Popeye’s fried chicken. Any other kind won’t do, of course, since Popeye’s is uniquely New Orleans. So many businesses have been unable to find workers and thousands of businesses . . . even the big chain stores . . . sit empty and boarded up. How hopeful, then, to see a long line of people standing outside an open Popeye’s, waiting to buy chicken for parade parties. At 9:00 a.m. Sunday morning! 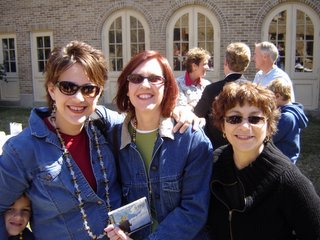 Precious friends, all of whom have lost so much and still press on, certain in the conviction that New Orleans will be rebuilt and that God has not abandoned them. These are real heroes; they came back, they keep working, they hope for recovery. They inspire me. 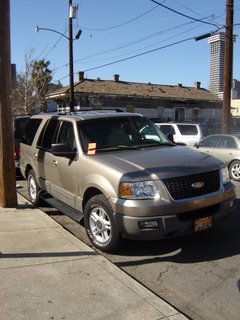 Not enough police presence to have Mardi Gras . . . that’s what they said. It’s too dangerous to have such a party without law enforcement in excess, keeping the peace and making sure everyone behaves. It could degenerate into total lawlessness!

I, on the other hand, was thinking it would be easier to find parking with not too many police patroling illegally parked vehicles . . . . Someone got a ticket, though. (Not me!) When I saw it I knew something the driver of this vehicle probably didn’t immediately recognize . . . a parking ticket during Mardi Gras . . . a sign of hope! 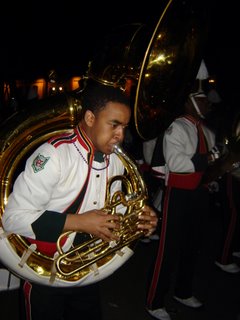 What about bands for Mardi Gras? All the children have left the city, moved to other places to continue the school year. Poorer, inner-city schools have been devastated by the disaster. Teachers are gone; facilities are destroyed; there are no bands to march in Mardi Gras parades.

It was a true sign of hope to see bands in the parades, many of which came from far away to keep the party going. This band is from Mississippi Valley State University in Itta Bena, Mississippi. They 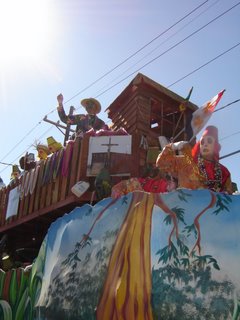 The party goes on . . . Mardi Gras krewes threw a traditional party, complete with garish floats, excess throws and a spirit of revelry. 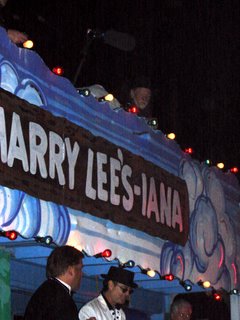 Celebrities turned out in full force for the first Mardi Gras after Katrina. Can you see Willie Nelson up there on top of the float? Also hanging around were Michael Keaton, Harry Anderson, Sean Astin, Elijah Wood and others. 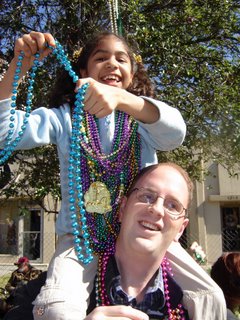 My family, celebrating Mardi Gras, even after all the pain and loss in our former home town. A place to come back to, old memories to recall and new memories to make. To me, a picture of hope.