As you know if you’ve been reading the blog these last weeks, the folks at Calvary are spending a lot of time sinning . . . er, that is, theoretically considering the Seven Deadly Sins as part of our Lenten practice.

(Here’s Dorothy Sayers‘ definition of sloth, just in case you are unfamiliar with this specific sin: “In the world it is called Tolerance, but in hell it is called Despair. It is the sin that believes in nothing, cares for nothing, seeks to know nothing, intereferes with nothing, enjoys nothing, hates nothing, finds purpose in nothing, lives for nothing and remains alive because there is nothing for which it will die.”) 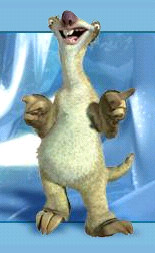 I expect you’re thinking (or maybe not) . . . “How appropriate, since this week the new Ice Age Movie, which stars a sloth—the animal, not the sin—debuts in theatres.” Is that incredible planning on the part of the worship team or what?

As part of our worship we’ve been reflecting on different readings from literature, both modern and ancient, to help us focus during prayer on the areas of our lives in which we need to recognize sin and make a change.

To consider the sin of sloth we heard a reading from Andre Dubus III‘s powerful book House of Sand and Fog (read the book; the movie doesn’t do his writing justice).

Here’s the part we heard:

“[As I sit and watch these people] I again think to myself: These people do not deserve what they have. When I first came to these United States, I expected to see more of the caliber of men I met in my business dealings in Tehran, the disciplined gentlemen of the American military, the usually fit and well-dressed executives of the defense industry, their wives who were perfect hostesses in our most lavish homes. And of course the films and television programs imported from here showed to us only successful people: they were all attractive to the eye, they dressed in the latest fashion, they drove new automobiles and were forever behaving like ladies and gentlemen, even when sinning against their God.”

“But I was quite mistaken and this became to me clear in only on week of driving my family up and down this West Coast. Yes, there is more wealth here than anywhere in the world. Every market has all items well stocked at all times. And there is Beverly Hills and more places like it. But so many of the people live in homes not much more colorful than air base housing. Furthermore, those late nights I have driven back to the apartment in Berkeley after working, I have seen in the windows the pale blue glow of at least one television in every home. And I am told that many family meals are eaten in front of that screen as well. And perhaps this explains the face of Americans, the eyes that never appear satisfied, at peace with their work, or the day God has given them; these people have the eyes of very small children who are forever looking for their next source of distraction, entertainment, or a sweet taste in the mouth.”

April 3, 2006 Love No Better Than Mine
Recent Comments
1 Comment | Leave a Comment
Browse Our Archives
Related posts from Talk with the Preacher