Love No Better Than Mine 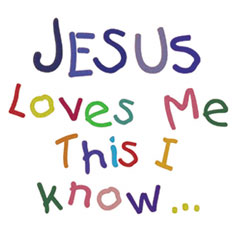 It’s a rather ridiculous situation if you think about it.

I grew up singing the song Jesus Loves Me, and, really, the main point of the song is not some hard-to-access, mysterious idea.

As they say, it’s not rocket science.

But I’ve realized lately that, for some strange reason, this is an idea that’s been easy to sing these past 36 years and awfully hard to live. As a matter of fact, I think that as I sing I must change the words a little because in my heart they are something like, “Jesus loves me this I hope . . . .”

Here’s how the logic (can we call it that?) of my thinking plays out:

I suppose I don’t have to tell you that all of this “logic” is somewhat problematic. (Not the fact that I don’t always love people. The fact that I have a hard time sometimes living as if I believe the words to Jesus Loves Me.) See, first of all, I have been a Christ-follower since I can remember. This is a very long time, certainly long enough to have gotten the gist of the idea, as I could probably sing Jesus Loves Me long before I learned to read. And second, (a very minor detail) I happen to be in the business of professionally helping people learn to live as if Jesus loves them. It would be appropriate for me to really believe it for myself, don’t you think?

These were the thoughts in my head this week when I turned on the CD player in my newly repaired Toyota. On the CD in my car Andrew Peterson was singing a song called Just As I Am (which sounds awfully Baptist but is not, in fact, the hymn we sang 25 verses of while praying that someone would please walk down the aisle so the pastor would not have hurt feelings). It was in listening to this song that I finally had a revelation about this dilemma in which I’ve found myself lately. Here are the lyrics that jumped out at me (after having listened to the album only 523 times at least):

That’s it! It’s fear, not just of falling one too many times (which is also a fear, of course), but worse . . . that God’s love is no better than mine.

So that’s what’s been on my mind lately . . . the deep hope that until I can sing, “Jesus loves me this I KNOW” at the top of my lungs and believe it without reservation, that I can at least believe God’s love is better than mine. At least.

A good friend recently passed along these words of Thomas Merton: “God seeks Himself in us, and the aridity and sorrow of our heart is the sorrow of God who is not known to us, who cannot yet find Himself in us because we do not dare to believe or trust the incredible truth that He could live in us, and live there out of choice, out of preference. But indeed we exist solely for this, to be the place He has chosen for His presence, His manifestation in the world, His epiphany. But we make all this dark and inglorious because we fail to believe it, we refuse to believe it. It is not that we hate God, rather that we hate ourselves, despair of ourselves. If we once began to recognize, humbly but truly, the real value of our own self, we would see that this value was the sign of God in our being, the signature of God upon our being.”

Brother Thomas seems to know exactly how I feel . . . maybe I’m not the only one who has a hard time with the words to Jesus Loves Me. That’s rather comforting as I keep trudging on, trying to learn to sing that old song the way it was meant to be sung.

April 5, 2006 Unexpected Goodbye
Recent Comments
2 Comments | Leave a Comment
"Any updates with the blog ?"
Stanley Sabbath as Radical Witness
"I really, really, really liked this article. Thank you. ♥"
maguilar9855 When God Gets Political: Enough
"To the author/researcher: I am wondering if you uncovered a time when, as Dr. King ..."
Judith March Hardie MLK at The Riverside Church in ..."
"Church is boring."
Ivan T. Errible Sabbath as Relationship
Browse Our Archives
Related posts from Talk with the Preacher