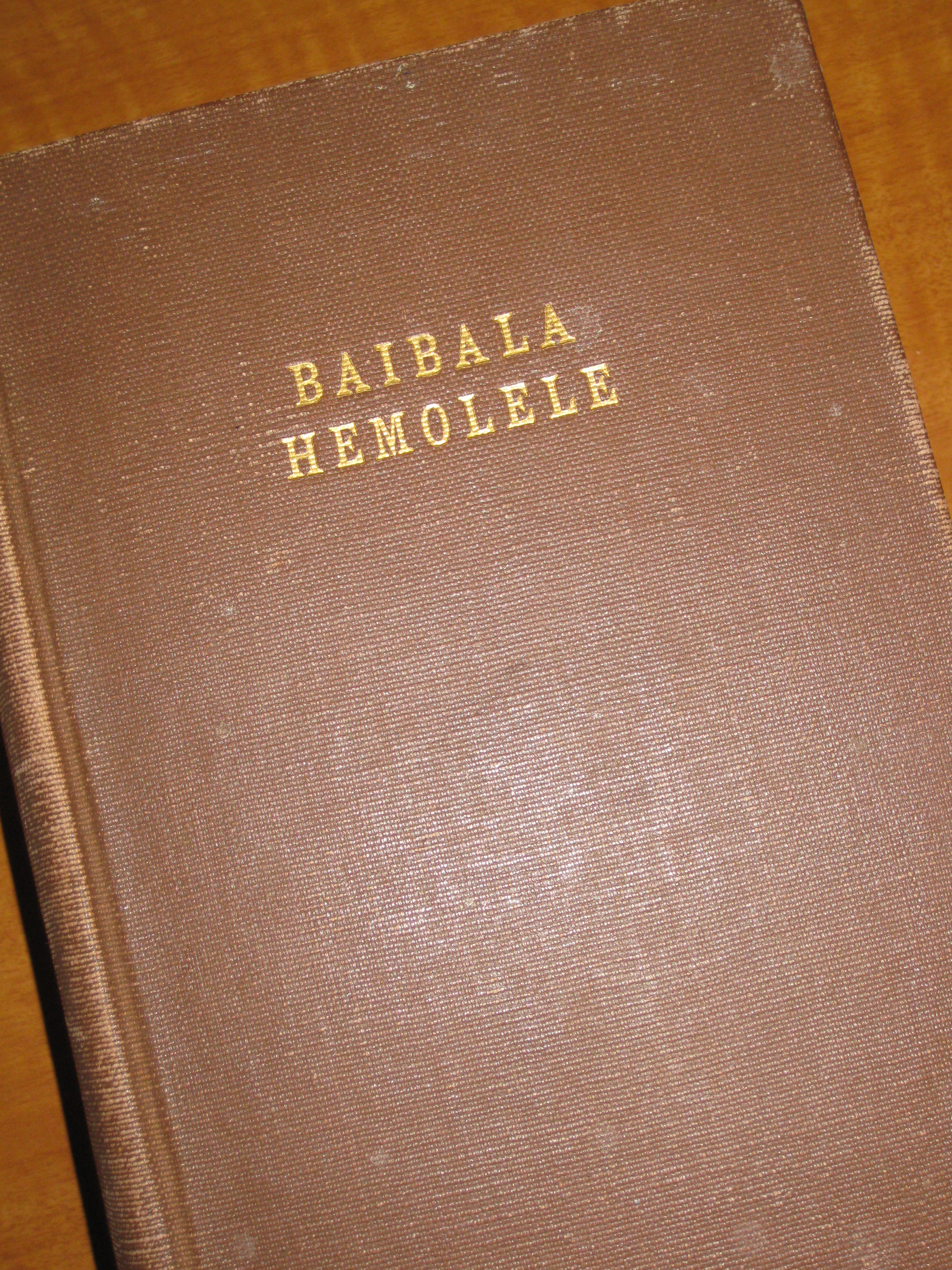 I’m spending some time this summer at the offices of Baibala Hemolele, the Hawaiian Bible Project.  On my first day I heard the history of the Hawaiian Bible, which I was assigned to write up in an article, the text of which follows here:

The Hawaiian Bible, Baibala Hemolele, is a critical document in the history of the Hawaiian people.

The first Baibala Hemolele translation team was made up of five western missionaries and a team of Hawaiians, most of whose names we do not know.  No formal account of the translation process exists today, but many of the missionaries kept detailed journals that may contain information about the process the team undertook in their translation project.  Scholars have yet to mine those documents to try to reconstruct the story.  In the meantime, this is what we know about the history of the Baibala Hemolele.

In 1837 this team of missionaries and Hawaiians finished the first translation of the New Testament; in 1839 the Old Testament was completed.  Together they made the 1839 version which, when printed and bound, looked like a football, or a coconut.  The people called it “poipoi”—round.  As the Baibala was the first book ever published in the newly invented Hawaiian language, its publication started the process of Hawaiians learning to read and write the language that had been the basis of their oral tradition.

Baibala Hemolele was reprinted with minor revisions in 1868, an effort guided by a committee led by Kahu Ephriam Clarke, pastor of Kawaiaha’o Church in Honolulu.  It was this 1868 version printed by the American Bible Society that was printed over and over again until 1994, when the decision was made to cease publication.  At that time, Hawaiian had become an almost obsolete language, as most Hawaiian children were encouraged to learn English in school.  The market for the Baibala was small to begin with and shrinking because of this educational trend; it didn’t make sense for the American Bible Society to keep printing the Baibala.

In the Hawaiian community it is a custom to present the Baibala on special occasions and to use it in worship, so eventually the community became aware that the Baibala was no longer being printed.  Ironically, Hawaiian language was at that time increasingly being taught in schools again, including several Hawaiian immersion options for children of all ages.  With the pool of native speakers growing and the ongoing need for the Baibala, the Hawaiian Bible Project began in 2002.

With seed money from concerned individuals, Partners in Development Foundation applied for and was awarded a sizable grant from the Administration for Native Americans.  Their plan was to retranslate the text from the Greek and Hebrew and publish it on a web site so that any students or churches needing to access the text could easily do so.

Once the project began, however, it became clear that additional resources for students of the Baibala could and should be included in the project.  After translating and posting the text on the Baibala web site, the team next added an audio version of the text.  The following phase included posting the different versions of the text: 1839, 1868, and the 1994 versions.  Currently the team is respelling the words to offer a printed text with the new orthography which includes grammatical markings for easier pronunciation and understanding.  Ultimately the team hopes to have the text available in printed form once again so the Baibala can continue its life and influence in the Hawaiian community.

Christian faith in Hawaii and the Baibala Hemolele have much to offer the larger Christian community, and the Hawaiian Bible Translation Project is building a foundation from which the Hawaiian culture can share its rich traditions of faith with the world.

July 19, 2009 No Words
Recent Comments
14 Comments | Leave a Comment
Browse Our Archives
Related posts from Talk with the Preacher