You can read a version of this entry in The Washington Post.

I’ve been a little surprised at the outpouring of interest and support that has come Calvary’s way after we voted this week to disaffiliate with the Southern Baptist Convention (SBC).  We are not the first Baptist church to leave the SBC, but perhaps we’re a congregation whose history of relationship with the SBC made that separation a little harder. 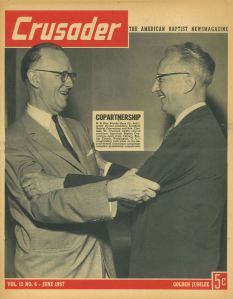 Calvary’s affiliation with the SBC was long-standing and historic, a source of much pride in years past.  In our church archives we have a photograph of the president of the Southern Baptist Convention at the time, Congressman Brooks Hays, and the president of the American Baptist Convention, Rev. Dr. Clarence Cranford, both Calvary members (Cranford was Calvary’s pastor then), clasping each others’ arms in friendship, partnership, and cooperation.

I haven’t seen any such reenactment in the years since that picture was taken; it was very possibly a moment that was the last of its kind.

Despite our long-standing ties to the Southern Baptist Convention, Calvary has for some time been at odds with many of the policies and public positions of the SBC.  There have been many specific issues, like a rejection of the ordination of women, for example, over which we disagreed.  But increasingly these differences became more foundational.

For example, as Calvary deacon chair Rachel Johnson reflected, “Throughout our history, Calvary Baptist Church has affirmed the vibrant role faith can play in the public sphere and the call of the Church to be a prophetic voice in our policy decisions, but always in a manner that is keeping with the Baptist distinctives of soul freedom and separation of church and state.”

One day we looked around and saw that the SBC had left those Baptist distinctives in the dust.  A long time ago.

So why hang around so long?

Some might say that to honor our historic connection and the dogged Baptist belief in autonomy (everybody gets to follow God’s leadership as they discern it) we have intentionally taken a wait-and-see approach, watching from the sidelines and hoping to influence change, or at least live to see the day that the SBC takes a change of direction.

However, the truth is that Calvary, like many big-steeple, downtown churches, has been working hard over the past 15-20 years to…survive.  With a changing neighborhood and a society that favors churchgoing less and less, this big building but increasingly smaller congregation was feeling the pain of these changes.  And while we watched what we perceived to be the turn of the SBC in a direction most of us could not follow, we really didn’t have the energy to take on the issue of affiliations along with everything else on our collective plate.

But in recent years, again with a change in the neighborhood and an influx of new, energetic members to join the committed already here, Calvary has had the incredible gift of new life.  And with a congregation focused less on survival and more on the mission and vision of the church, it became more and more obvious that our continued affiliation with the SBC, though for many years now in name only, did not reflect the shared beliefs of this community.

Calvary’s decision this week to disaffiliate with the Southern Baptist Convention, then, was an action of shared conviction and identity, a positive defining of who we are and who we want to be.

We’re not Southern Baptists anymore, but we’re still Baptists; we wouldn’t give those historic principles up for anything.  With this new declaration of affiliation we are freer to declare to the world our shared belief that God is a welcoming, inclusive, transformational God in whose service we are called to live lives of deep, authentic, and committed response.

It’s been a long process, but today we know a little better who we are.  And for that gift we say: thanks be to God.

July 23, 2012
We Are the Church: Blessing Our Commitments
Next Post