Guest Blogger Rachel Johnson: To Sing and Dance, Confessions of a Religious, but Not Spiritual

Rachel Johnson has spent her career working at the intersection of religion and politics.  She currently serves as Chair of Deacons at Calvary Baptist Church in Washington, DC.  You can follow her on twitter (when she remembers to tweet) at @rachelnoelj.

“Take a deep breath and be with your God.”

Struck by the invitation, my eyes popped open at those words of Sister Donna.  I was at vespers at a retreat center run by the Sisters of Mercy, so I was expecting to enter into a time of quiet and prayer.  But there was something just so . . . spiritual . . . about this invitation; I didn’t know quite what to do with it.

The thing is, I tend to think about God more in cosmic terms than personal ones – the long arc of the universe who bends towards justice, not necessarily someone I sit down with at the end of the day.  It would probably be fair to say that I am someone who is religious, but not always that spiritual.

And I’m not really sure if that’s a problem or not.

I mean, I go to church every Sunday and tithe every month.  I have been to seminary and am ordained.  But I’m not in the habit of talking about my personal faith. 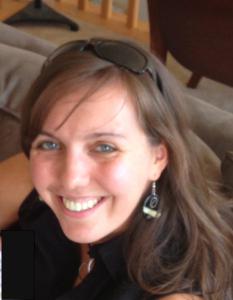 The Apostle Paul says that we are to always be prepared to give an accounting for the hope that is within us.  If I were to ever be called upon to give an accounting, I could easily talk about how I believe the entire cosmic order shifted when one man was hung on a cross 2,000 years ago and about how we live in a broken world, but through grace we have been reconciled to the one in whom we live and move and have our being.

But if asked why Jesus is important to me as an individual, the words would be a little harder to find.  And if questioned on my personal prayer life or Bible study, I would be forced to quote Paul again, “we do not know how to pray as we ought.”

I think there are a couple reasons for this.  First, I am just not a touchy, feely person.  I’m far more likely to express myself through sarcasm than sincerity and to remain stoic while others shed a heartfelt tear.  Scripture instructs us to love the Lord our God with all our heart, soul, and mind.  Ever the hopeless theology nerd, I am awesome at number three and pretty good at number two.  The heart piece lags behind.

Second, my personal faith practice often happens in reaction to a culture of competitive piety.  In many churches – particularly evangelical churches in the south – spiritual formation is turned into a race to see who can get more jewels in their crown.  There are Bible drills where children compete to see who knows Scripture best.  Growing up we had devotional workbooks in my Wednesday night children’s group and we were literally given gold stars if we had done all the devotions for the week.  I once earned a king size Hersey bar for memorizing all the lyrics to Trust and Obey.  Faith was a game to be won (and never, ever something to be questioned).

While it’s true this method helped me to learn all the books of the Bible, it also taught me something far more harmful – that there were certain things you had to do to be a “good” Christian and you could always judge how well you were doing by comparing yourself to others.

I was lucky enough to also be taught to reject this paradigm of faith, but it doesn’t mean I wasn’t impacted by it.  For too many people, things like prayer, devotions, and Scripture reading became a measuring stick against which we were pretty much guaranteed to come up short.  At some point some of us decided the gold star just wasn’t worth the guilt, and we quit the game altogether.

So I’m not sure what to make of this personal conundrum.  I hear other people talk about how deeply meaningful their prayer or Bible time is to their lives, but every time I sit down with a Bible in my lap, waiting for a still small voice to stir my soul, I come up with crickets (and not the kind that remind me God is in every tiny creature).  I can’t help feeling that I’m doing the whole thing wrong, that my spirituality card is defective, and that maybe none of it really matters that much anyway.

Still, despite the Hunger Games fashion in which piety is often taught, despite the fact that the idea of having coffee with Jesus prompts an eye roll so big my contacts get lost in my head, despite the reality that I am simply no good at piety in general, I just can’t shake the belief that all those personal spiritual disciplines are actually important.

There’s a reason I am a member of a church and not a civic organization.  There’s a reason I seek my community within the body of Christ instead of a bowling league.  I really think that faith is a habit that needs to be intentionally cultivated, a response to the world that must be practiced over and over again.  We need to be nourished so that we may nourish others.  The question is, “how?”

In the novel The Promise by Chaim Potok, a father and son are walking home from a Hasidic Jewish wedding.  The scene they just left was a joyous one where well past 1am dozens of Hasidim are still singing and dancing with unbridled enthusiasm, the way they sometimes do with their scrolls of Torah.  The father and son, David and Reuven, are orthodox Jews themselves, but they can’t bring themselves to practice the same strict pietism as the Hasidim.  They believe faith is not as black and white and there are hard questions that don’t have simple answers.  Reuven expresses this conflict by asserting that he can’t simply ignore the truth (the way he believes the Hasidim do).  At this point, his father turns to him and says, “No, we cannot ignore the truth.  At the same time, we cannot quite sing and dance as they do.  This is the dilemma of our time, Reuven.  I do not know what the answer is.”

I think this is a challenge both for individual believers and for the church.  How do we create space where we can share prayer requests, even when we’re not entirely sure how prayer works or what we believe about it?  How do we talk about “being with God” when we know that many of our friends won’t understand that language, and really, it sounds weird to us too?  How do we give Scripture authority in our lives as a sacred text when we know that it has been recorded and transmitted by people who are just as flawed as we are?

Like Reuven’s dad, I’m not really sure what the answers to those questions are, but I think they do need answers.

The night after the vespers service where Sister Donna invited us to be with God, I found myself walking a prayer labyrinth.  Like Nicodemus, I went alone, under the cover of darkness so that I could bail at any moment without anyone seeing me.  I started to walk the labyrinth, mostly feeling pretty ridiculous, certain I wasn’t doing it “right.”  I got to the center and didn’t really know what to do.  When nothing else came to me, I just started saying the Lord’s Prayer.  “When you pray, do not heap up empty phrases.  Pray in this way,” Jesus said.  I figured, “what the hell, I guess it can’t hurt.”

And then it occurred to me, perhaps this is the nature of faith for the spiritually defective – just doing what we’ve been taught to do, even if we’re not “feeling it,” trusting that the ones who taught us to pray weren’t leading us astray.  The words to another prayer, this one by Thomas Merton, then came to my mind:  “I have no idea where I am going.  I do not see the road ahead of me.  But I believe that the desire to please you does in fact please you.  And I hope I have that desire in all that I am doing.”

When I think about spiritual disciplines as something I need to do in order to be a “good” Christian, every fiber of my being rebels.

But when I think about them as roadmaps, paths that a great cloud of witnesses have traversed for thousands of years before me – Christians just like me who probably had no idea where they were going (and maybe were known to throw a giant eye roll or two), but believed that simply by walking, somehow God would be there – then there is a stirring in my soul.

Walking out of the prayer labyrinth that night a patchwork prayers and hymns started coming to my lips from somewhere deep within memory – prayers that had been said by countless before me; hymns that had been sung for generations.  At one point, I’m pretty sure I even hummed Trust and Obey.

August 23, 2013 On Being a Star...Just Like Everybody Else
Recent Comments
8 Comments | Leave a Comment
"Any updates with the blog ?"
Stanley Sabbath as Radical Witness
"I really, really, really liked this article. Thank you. ♥"
maguilar9855 When God Gets Political: Enough
"To the author/researcher: I am wondering if you uncovered a time when, as Dr. King ..."
Judith March Hardie MLK at The Riverside Church in ..."
"Church is boring."
Ivan T. Errible Sabbath as Relationship
Browse Our Archives
Related posts from Talk with the Preacher