Guest Blogger Tom Vaneskie: What I Think About Church and Other True Confessions

Tom Vanaskie is a member of Calvary Baptist Church in Washington, D.C., and a regular attendee of Theology on Draft, one of Calvary’s small groups.  He resides in the District with his soon to be wife, Sabrina, and their cat, Layla.  In his free time, he enjoys brewing beer, playing golf, and serenading Sabrina and Layla on his guitar.

I have a confession to make.  I’ve never blogged before.  In fact, I don’t have a Facebook account and have no desire to broadcast my life and thoughts to the world.  Yet, when Pastor Amy asked if I would contribute a guest blog post, I said yes.

The first problem I encountered in writing this post was what to write about.  My guidance from Pastor Amy was to write about anything.  I was immediately overwhelmed.  Then it hit me.  Why did I say yes?  Why was I willing, at least this one time, to share some of my thoughts in a way I haven’t before?  I’m generally a very private person.  Although I consider many people to be my friends, I am careful about how much I tell them about myself and wager that many of my friends don’t know all that much about me. 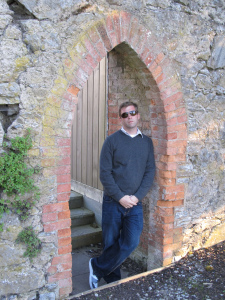 For example, I doubt that many of the people I see on Friday or Saturday nights know that I regularly attend church at Calvary Baptist Church in downtown Washington, D.C., or that I actually play the guitar in my living room.  So why did I say yes?  In one word, the answer is Calvary. That might not mean much without some explanation.  So please, indulge me for a few paragraphs for me to explain.

I grew up Catholic and attended mass every week.  I went to a Catholic grade school and a Jesuit high school.  By the time I went to college, I was done with organized religion.

Then, I met my fiancé, Sabrina.  Religion was – and is – important to her, and she asked that I attend church with her.  So I went with her.  At first, I was there more to support her, but slowly, I found that I wanted to go, not just to support Sabrina, but for myself.  Calvary was entirely different from my Catholic upbringing.  The pastors and the congregation made it clear that religion is not something to be blindly followed, but something to be discussed and questioned.  For about two years, I regularly sat in the back of church with Sabrina taking in the Calvary community each week.  Being a private person, however, I, with Sabrina in tow, bee-lined for the exit after each service, rarely saying more than a hello to anyone.

Finally, Sabrina and I decided we should open up to these people a little bit, possibly even join Calvary.  To do this, we decided to check out one of Calvary’s small groups.  Because of my love of beer, we settled on attending Theology on Draft.  We figured that, even if the group was lame, at least we’d each have a beer and maybe snack during happy hour.

The group, however, was anything but lame.

They were intelligent people having honest discussions about faith and religion and what those mean to them.  They asked questions, listened attentively, and respected differing opinions.  Gradually, I started sharing my thoughts, opinions, and beliefs on religion and faith with this group, who at first were strangers, but are now very good friends.  This was the beginning of stepping out of my element and opening up to others through Calvary.

After officially joining Calvary in May 2012, I’ve continued to step out of my element and open up to the congregation at Calvary.  I was asked to participate in a resurrection storytelling series and said yes.  I wrote a story of a resurrection in my life and shared it, not with just Theology on Draft, but with the entire congregation.  It was big step for me to share a personal story from my life with so many people.

So when Pastor Amy asked me to write a guest blog post and share some of my thoughts to anyone who reads this blog, I naturally said yes because through Calvary, I’ve become more comfortable stepping outside of my comfort zone and sharing my thoughts, opinions, and beliefs with others.

August 21, 2013 Guest Blogger Rachel Johnson: To Sing and Dance, Confessions of a Religious, but Not Spiritual
Recent Comments
4 Comments | Leave a Comment
"Any updates with the blog ?"
Stanley Sabbath as Radical Witness
"I really, really, really liked this article. Thank you. ♥"
maguilar9855 When God Gets Political: Enough
"To the author/researcher: I am wondering if you uncovered a time when, as Dr. King ..."
Judith March Hardie MLK at The Riverside Church in ..."
"Church is boring."
Ivan T. Errible Sabbath as Relationship
Browse Our Archives
Related posts from Talk with the Preacher