Legacy: Calvary at the March on Washington 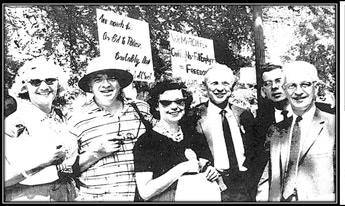 The photo, from DCBC archives, shows Rev. Dr. Clarence W. Cranford (R), then-pastor of Calvary Baptist Church in Washington, D.C. and other American Baptists at the March on Washington in 1963. Their posters read: “We march for an end to police brutality” and “We march for Civil Rights + Full Employment = Freedom.”

Clarence Cranford was pastor of Calvary Baptist Church for a total of 29 years.  His was a voice that pushed the church (local and national) to ever-radical expressions of the gospel, continuing in the tradition of the Calvary congregation from its founding.  Pastoring as he did during the era of the Civil Rights Movement, he met considerable opposition to his views on racial equality in America.  This is an article written by Dr. Cranford about his participation in the March on Washington, 50 years ago today.  It was printed in the Capital Baptist, a publication of the DC Baptist Convention.  You’ll note his use of language we would consider non-politically correct today, but it was common parlance at the time.  What is radical for the time in which it was written is the position he took and the bold statements he made.

I never met Dr. Cranford, but I try to step in his big footprints everyday around here.  Reading his thoughts about the March on Washington made me proud to be the pastor of this church, and deeply grateful for the commitment to a radical expression of God’s love forged and nurtured at Calvary.

What a gift…and what a responsibility.