If your family is anything like mine, you probably recently engaged in the annual Thanksgiving tradition of sharing some things for which we are each thankful. It can be a tradition that lessens in meaning with its repetition every year. Even with the Pinterest flourishes engaged by those in charge of decorating this year at my house, there were some who sighed with resignation: “Here we go again!”

It seems silly that we’d ever find the tradition tiresome, as every single year we fail to make it all the way around the table without tears. There is so much to be grateful for, and I don’t know why we have to wait until Thanksgiving every year to remember.

In addition to celebrating Thanksgiving this year, I have joined pastors everywhere these past weeks in ushering in a season of stewardship. Every year, those of us responsible for raising enough money to keep the lights on struggle to frame that fundraising in spiritual terms: we are giving to God, we say. We are acting with gratitude. We are participating in the spiritual practice of abundance.

I really think all of these things are true, so I don’t want to discount any language for reminding each other of the call to generous living. But I’ve been curious again this year about the stigma of stewardship, how some of us (clergy and laity alike) tend to approach this time of year with a bit of sighing. No matter how exciting a stewardship campaign one plans, the tedium of repetition creeps in and one may find oneself thinking: “Stewardship season … here we go again!”

This year, I began thinking about our need to even have this conversation at all. Indulge a pastor’s fantasy for a moment: what if Thanksgiving wasn’t a special holiday and stewardship wasn’t a season and giving was just a way of life?

A couple of months ago I was sitting in worship. I’d been invited by some friends to join them as I had a few Sundays of sabbatical left and was relishing opportunities for pew-sitting. It was a small congregation, the folks gathered sitting in the round and participating in worship.

I’d noticed the man when I came in; he was eagerly sitting on the front row a few seats ahead of me, animatedly participating in worship. Though it was clear he was someone who existed on the margins of society, it was also obvious that he was a familiar and beloved presence in the community. Through most of the service I sat a few rows behind him, just minding my own business.

As the time for the offering arrived and we were invited to give, the man in front of me got up, came over to stand next to my chair, and asked me for a quarter. He did not, like the rest of us, discreetly fumble for a couple of dollars or close his eyes “praying” to avoid the plates. The man just came on over and said, “I need a quarter,” and held out his hand.

In that moment, I caught myself thinking, “That’s so inappropriate, interrupting the offering time like that.”

And then I thought: “Did you just hear yourself?”

Motivated by my own chagrin, I opened my wallet and dug around for some money. I can’t remember if I gave him a quarter or something else, but I managed to give him something.

And then the offering plates came around, and he put the money I gave him right in.

Now as we are in the season of stewardship, talking about money and generosity and all the ways in which we cling to what we have, I’ve revisited that experience over and over again, puzzling over what it has to teach me, not only about what compelling message a religious professional might craft to motivate generosity, but even more about how my own heart needs to change.

Maybe it was the unusual experience of being asked individually and guilelessly for money — in public, no less.

Perhaps it was his innocent expectation that I would give him some money — of course I would! I obviously had more to share than he did.

And maybe, most strikingly, I think it was the way he turned after I gave him the money and put it immediately in the offering plate.

What would happen to this world if the people who have more than they need didn’t even think about giving it away? And what would life be like if those of us in need saw our lives from the perspective of those who are even more needy? And what if we lived with open hands, asked each other to share without a second thought, received the gifts of others with no shame or hesitation, and turned then to give away what we didn’t need? 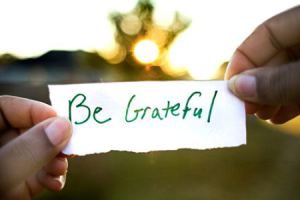 If we lived in a world where we behaved like that, I’m doubtful we’d be scouring Pinterest for unique ways to get the family to participate in expressions of thanks. I’d bet we wouldn’t spend much time at all working to create compelling stewardship campaigns. Instead, we’d be people who live with boldness into the call of community and reconciliation, with no thought at all for what we have and how to keep it.

It seems silly that we’d find the tradition of stewardship tiresome, as every single year we agree: we have so much more than we need. Yes, there is so much to be grateful for, and I don’t know why we have to wait until stewardship season every year to remember.

This article appeared first over at Baptist News Global.

December 3, 2014 Learning Lament: One Day in Ferguson
Recent Comments
3 Comments | Leave a Comment
"Any updates with the blog ?"
Stanley Sabbath as Radical Witness
"I really, really, really liked this article. Thank you. ♥"
maguilar9855 When God Gets Political: Enough
"To the author/researcher: I am wondering if you uncovered a time when, as Dr. King ..."
Judith March Hardie MLK at The Riverside Church in ..."
"Church is boring."
Ivan T. Errible Sabbath as Relationship
Browse Our Archives