The Light Moves With You

The Light Moves With You January 7, 2015 Amy Butler

The Light Moves With You

Happy new year, church! As we come to worship this morning, the first Sunday of 2015, we’re looking at the lectionary texts for the season of Epiphany, which begins officially this coming Wednesday with the familiar story of the star and the kings and a story of intrigue, espionage, and murder told in Matthew’s gospel.

I don’t know about you, but I can’t think of the story of the Magi following the star to find the baby Jesus without thinking of Barbara Robinson’s classic, The Best Christmas Pageant Ever.  You might remember that story; it’s a story about a church Christmas pageant and the year the Herdman kids showed up to participate.

The Herdmans were, of course, “the worst kids in the history of the world.  They lied and stole and smoked cigars (even the girls) and talked dirty and hit little kids and cussed their teachers and took the name of the Lord in vain and set fire to Fred Shoemaker’s old broken-down toolhouse.”

The story that unfolds is a hilarious description of trying to produce a respectable children’s Christmas pageant with a whole family of children who had never heard the Christmas story before.

In the story, the Herdman boys are cast as the three kings, but the day of the pageant they decided the traditional gifts, jars of some of the church ladies’ bath salts, were stupid gifts to bring a baby, so they went home and dug a ham out of the charitable food basket the church had delivered to their house—they thought they might use that as a gift! 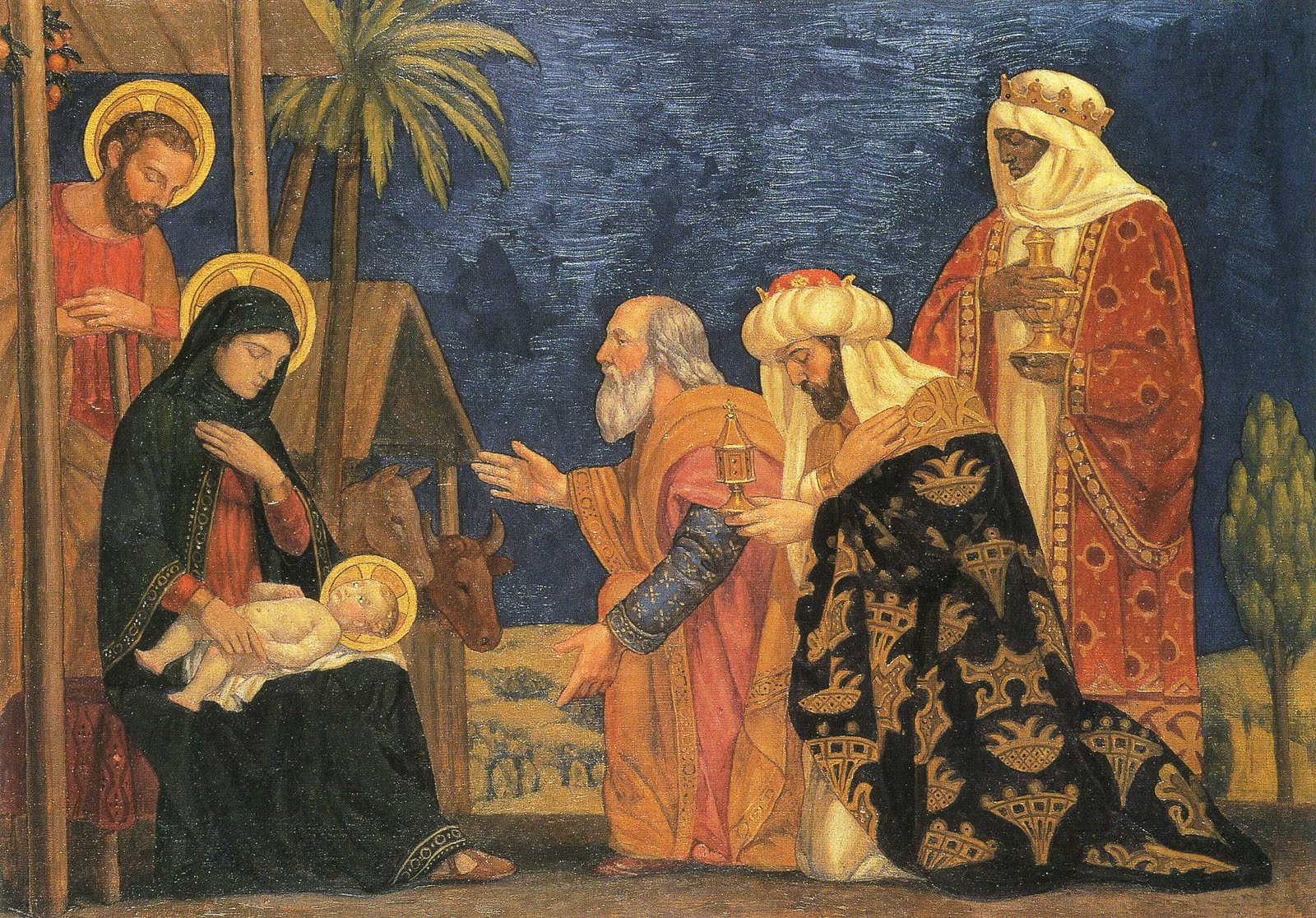 With the beginning strains of We Three Kings of Orient Are, then, the three Herdman boys, Leroy, Claude and Ollie, arrived from the East (like my uncle from New Jersey, the narrator explains), carried the ham from their food basket, wrapped in a large red ribbon, and dropped it right in front of the manger.

After delivering the gift, the three kings were supposed to confer and then turn to leave through a different door, because the Bible says they left a different way and didn’t go back to report to King Herod.

But the three Herdman boys playing the kings didn’t want to leave; they wanted to stay with the baby, so they pushed some shepherds aside and sat right down next to the manger, all the way through Silent Night to the very end.  Nothing in the Christmas pageant went the way it was supposed to, especially not the part about the three kings and the bath salts, but in the end it was the best Christmas pageant ever.

Maybe you have a similar memory of three kids in bathrobes and tin foil crowns?  That seems to be our modern-day understanding of this biblical story.

You might be aware that there are four accounts of life with Jesus included in our Bibles.  They are individual memoirs of experiences with this One who changed the world, and they are told from unique perspectives.  The New Testament begins with Matthew’s account, but Matthew did not write his memories first.  Scholars think it was Mark who beat everyone to the punch, writing down his memories.

A little later, you might imagine that Matthew, Luke, and John sat down with Mark’s memoir and began to reconstruct their own accounts of events.  Naturally, this would make for different perspectives on the same events and, in some cases, different stories altogether.

You might remember that Matthew is the only gospel writer who included this strange story of the Magi and their trip to visit Jesus—the only one!  But Matthew had a reason for including this story even though the others perhaps thought it peripheral: Matthew, you recall, was a Jewish writer.  It was important to him to paint a picture of Jesus the Messiah as KING of the Jews—a figure worthy of royal acclaim, someone who fit the Jewish expectation of the coming Messiah.

For that reason, it makes perfect sense that Matthew would tell of the wise men from the East traveling to see the baby, a story around which you and I and all of our cultural constructs have created legend and lore that is hard to separate from the actual text. For one thing, nobody said anything about kings visiting; Matthew calls them wise men—sages, astrologers, magicians.  Remember they stopped to visit King Herod, asking about a newborn KING of the Jews—setting Matthew’s designation of Jesus as royalty perfectly.  But the wise men weren’t kings.  And there weren’t three of them—at least as far as we know.  They brought three gifts, it’s true, but Matthew never tells us how many of them there were.

And though we know as modern scholars of the text that Matthew had a literary and thematic motive here, it’s hard for you and me to keep the text separated from our traditions, and its definitely hard to think about what this text might have to say to us, 21st century followers of Jesus.

It may help us to note that this week begins the church’s lectionary season of Epiphany.  Epiphany begins with a dark, inky sky lit by the light of one star.  And as we walk through these next several weeks, think of our work of discipleship as that of following the light.  As we meander through gospel stories about Jesus and his work in the world, each week the dial on the light switch turns up, little by little, showing us the bigger picture about this one we claim to follow.

But today we’re still in the dark, the night sky of our comprehension lit only with the light of one star, and we’re hearing the story of a group of seekers who also found themselves in the same situation: looking for meaning in this human life, but having only a little bit of light by which to take next steps.

And perhaps it’s here: not in the intrigue-filled story of seekers and sages, kings and babies born to poor peasants, but instead in the seeking itself, that we find meaning.

Perhaps especially at the start of a new year, you and I are looking for meaning in our lives.  We want to know where we’re going and why.  Like us, there are so many people in this story who are looking for the meaning of their lives.  There’s Herod, who was appointed by the Romans to rule over Judea—which he did for over 30 years.  He was infamous for his brutality, suspicious and insecure, prone to kill people close to him if he thought for a moment that they were a threat to his power.  He murdered his wife, three sons, his mother-in-law, his uncle, his brother-in-law, and after the passage we read today, so many Jewish babies all over Galilee.  He built many monuments in his time, including the rebuilding of the temple in Jerusalem, but he was desperately scared to lose his power, and his approach to finding purpose in life was intimidating those around him.

Also in this story were the chief priests and scribes of the people, who desperately clung to meaning in their lives through knowledge—knowing the law backwards and forwards, able to say definitively any answer to any question that was raised.  They were peripheral to the court, but they functioned in much the same way as Herod did.  Control, control—our knowledge and expertise will save the day!

And then, finally, there are these sages…the wise men.  They rejected power and control, knowledge and education, in order to set out on a journey that seemed dark and foreboding, the end of which they could not see and did not know.

Isn’t their experience more like your life and mine?

We’d like to use our education or our position or our power to influence the future, but in our deepest hearts, we know that we can’t.

The search for meaning and purpose in our lives comes with giving up the trappings of importance as dictated by this world, and stepping into darkness—hoping that the light—just enough light—will show us where our next steps should be.

It’s not the baby that’s the point of this story.

It’s the darkness, and the courage it took to step into the darkness, trusting that there would be light—just enough light to see for the next step.

Looking for meaning, purpose in your life?

I’m pretty sure you won’t find it by wielding your power or depending on your education and experience.

It seems to me that the lesson from Matthew’s story of the wise men for you and me—modern folks with so many resources to call on—is that we are going to have to step into the darkness, to trust in something bigger than ourselves, to believe that the light will follow us, all the way to the manger.

I don’t know.  But I do know this question is not unique.  This is, in fact, the question all of humanity has been asking forever.  What is the meaning of my life?  Where do I go next?

I wonder if we could take the example—not of Herod or the scribes and High Priests, who preferred to fall back on what they knew—but of the wise men, who stepped into that inky black darkness, lit only by the light of one single star.

This is, in fact, the struggle of all humanity, isn’t it?

The biblical text is full of examples of this—it’s not just the wise men in Matthew’s gospel.  So, as you consider whether you will take such a risk in this new year, hear the words of Ruth Sohm’s poem about another biblical character, Miriam, as she faced a similar question.

I Shall Sing to the Lord a New Song

I, Miriam, stand at the sea

to face the desert

My eyes are dazzled

My hands turn to dove wings.

reach for the sky

and I want to sing

the song rising inside me.

Where are the words?

In a moment of panic

Can I take a step

Will the ground sink away from under me?

How can I sing?

To take the first step –

To sing a new song –

Is to close one’s eyes

For a moment knowing nothing risking all –

But then to discover

The waters are friendly

The ground is firm.

Out of my mouth

that has been in my heart

You and I, we are seekers in this new year: seekers for the meaning of our lives.  Will we step into the unknown?

Surely, God will meet us there.

December 30, 2014
On Saying Goodbye and Saying Hello
Next Post

Evangelicals Are Attracted to Conspiracy Theories—Why?
Divergence
Related posts from Talk with the Preacher