On Saying Goodbye and Saying Hello

Just the other day I was remembering 11 years of Christmas Eve services at my former congregation. I recall the first year I was there, trying desperately to come up with a unique idea for a service that had become a bit tired, when one of the older members of the congregation offered to build a stable in his woodshop, bring it down to church, and install it in the sanctuary.

With his help, the contribution of a couple of bales of hay from some members who lived out in the country, and our building engineer’s creative rigging of a Moravian star from the very tall sanctuary ceiling, a new tradition was born.

That first year I drafted unsuspecting congregation members, including my own children, to assemble a live nativity (no animals, though) as we read the Christmas story in worship. I recall that the scene was pretty sparse; there were no babies in the congregation, so we resorted to using an old baby doll from the nursery to be Jesus. 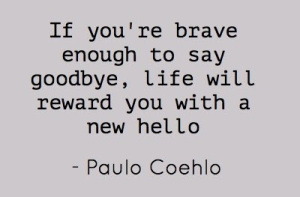 But it was sweet and good, and the very next year folks began asking in October about whether we’d have the stable up again this year.

I don’t think anybody knew, but as I watched my congregation grow and change year to year I measured our progress by how many possible baby Jesuses we had to choose from. In other words, we only used the baby doll that first year, and by the time I left, there was spirited discussion about how we’d know which congregational baby got to be Jesus each year (answer: the baby born closest to Christmas wins).

But this year there was no hanging star or bales of hay, and nobody in competition for the manger. This Christmas Eve I found myself in a new place, engaged in beloved, long-held traditions of a new community, traditions that were brand new to me. And as I experienced all that was new, I was surprised to feel rather sharply the pain that is so familiar to many of us at Christmas, the pain that comes with the absence of the familiar. I missed the rambunctious angels; I wondered who was drafted this year to be the three kings; I missed what had come to feel like home.

In my work as a pastor I’ve often heard folks share the grief that comes with the holidays. Twinkling lights and Christmas tunes in the air seem to call that out in us all: fond remembrance of the way things used to be; sharp regret for past mistakes; comparative analysis between memory and reality, with reality often coming up short.

I felt it this year. And as I felt the pain of separation again, I looked around at my new congregation. We’re still getting to know each other, and I’m sure none of them knew about my secret baby Jesus marker of progress. As I felt the pain of absence, however, my eyes got wide at the wonder of the new.

So many patiently walked me through traditions long familiar to them. Everyone welcomed my leadership, which, come to think of it, probably felt decidedly strange to them, too. And as I watched the traditions of this new congregation unfold around me, I realized that, while all that is new does not negate the pain of separation, learning to see with new eyes helps to ease the pain.

On Christmas Eve this year I was surrounded by strains of Messiah sung by such an amazing choir. And as I looked out over a sea of flickering candles filling the sanctuary, I realized that all of this newness will very soon become tradition. For this one year, I could look with unique perspective at the traditions of my new community, savor them in their beauty, and appreciate them in ways I won’t be able to once they become familiar. And the wonder of all that is new is the starting place for making a home.

As I sat there that night, all those emotions mixed together: the sharp grief of goodbye along with the beauty and wonder of hello. Grief of loss became gratitude for such memories. Wonder and unfamiliarity at all that is new became hope for the future. And all of that — all of it — feels a lot like gift.

This essay was published first over at Baptist News Global.

January 7, 2015 The Light Moves With You
Recent Comments
3 Comments | Leave a Comment
"Any updates with the blog ?"
Stanley Sabbath as Radical Witness
"I really, really, really liked this article. Thank you. ♥"
maguilar9855 When God Gets Political: Enough
"To the author/researcher: I am wondering if you uncovered a time when, as Dr. King ..."
Judith March Hardie MLK at The Riverside Church in ..."
"Church is boring."
Ivan T. Errible Sabbath as Relationship
Browse Our Archives