Grace is a Choice

Turns out it’s not all umbrella drinks and movie-worthy sunsets in paradise.

For the last few weeks I’ve been visiting my home state of Hawaii, where there is an increasingly critical issue of affordable housing and more people than ever living on the streets and the beaches, homeless.  And while there are large homeless populations in the more rural parts of the island, now even areas frequented by tourists are filled with makeshift homeless villages. 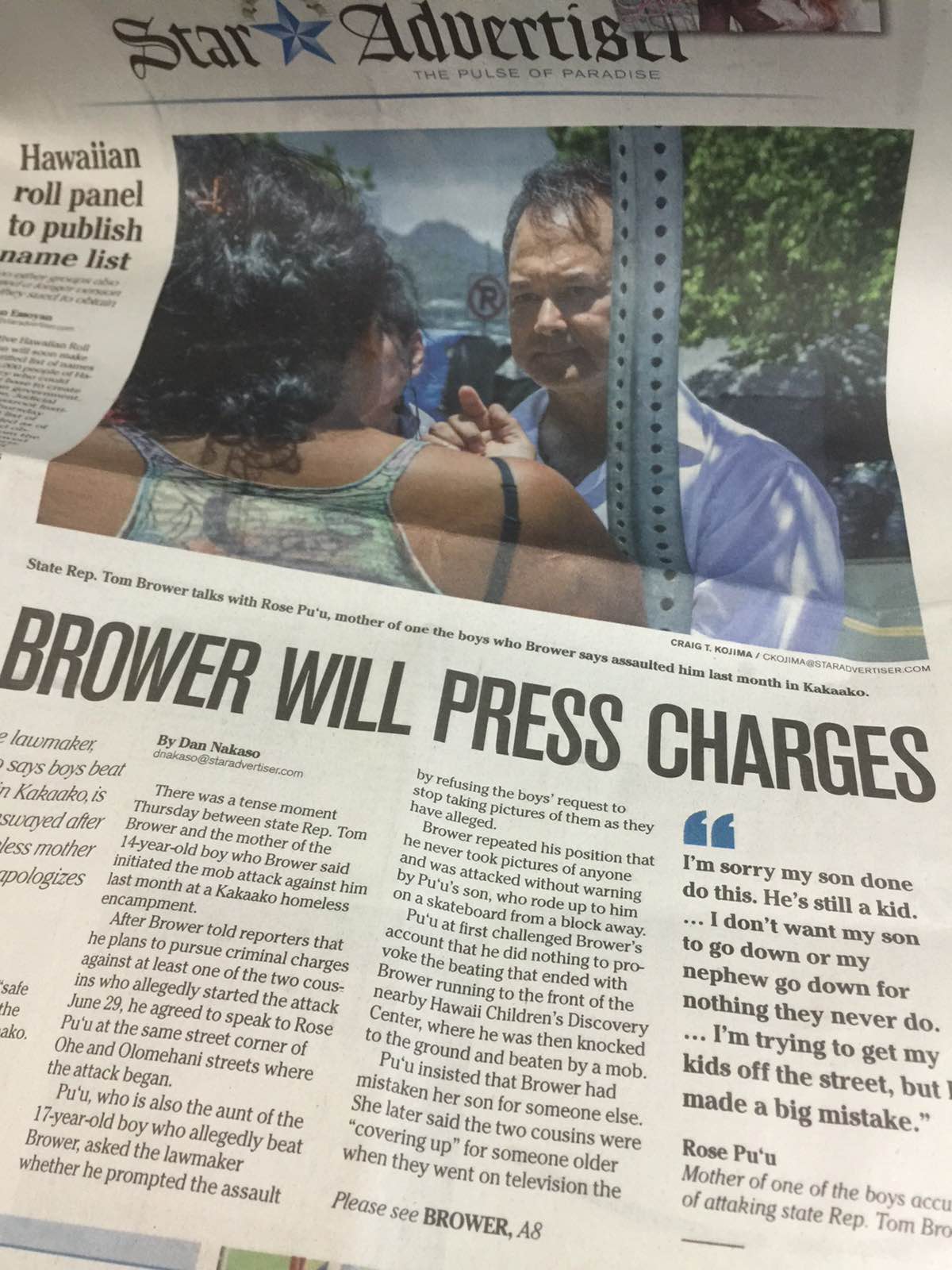 With scenes like these as backdrop, a story has been unfolding on the front page of the local Honolulu newspaper these past weeks.  State representative Tom Brower (D) was allegedly attacked by a group of homeless teens a few weeks ago, when he was visiting an area of the city he represents.  Stories are mixed about what exactly happened and why, but it’s clear there was an altercation that left Rep. Brower with “a laceration near his right eye, facial swelling, bruised ribs and scrapes on his leg and left hand.”

The story making the headlines now is Rep. Brower’s decision to press charges against the youth implicated, one of whom is 14 years old, despite the young man’s mother’s plea for another solution.

Recently, the mother of one of the young men involved begged Rep. Brower to speak with her, during which she apologized repeatedly, broke down in tears, took responsibility for her own mistakes that had left the family homeless, and described the desperate situation from which they could see no way out.  She said, “[I have] no education, no nothing … I cannot get off the street if I have to go through all this.”

Despite her pleas, Brower intends to press charges, claiming he has no choice.

Watching these events unfold in the news these past weeks, I can’t help but think of another recent news story that broke in South Carolina recently.  It happened on July 19 at a Ku Klux Klan rally at the state capitol, where more than 2,000 people showed up in sweltering heat to profess white supremacy and wave Confederate flags. 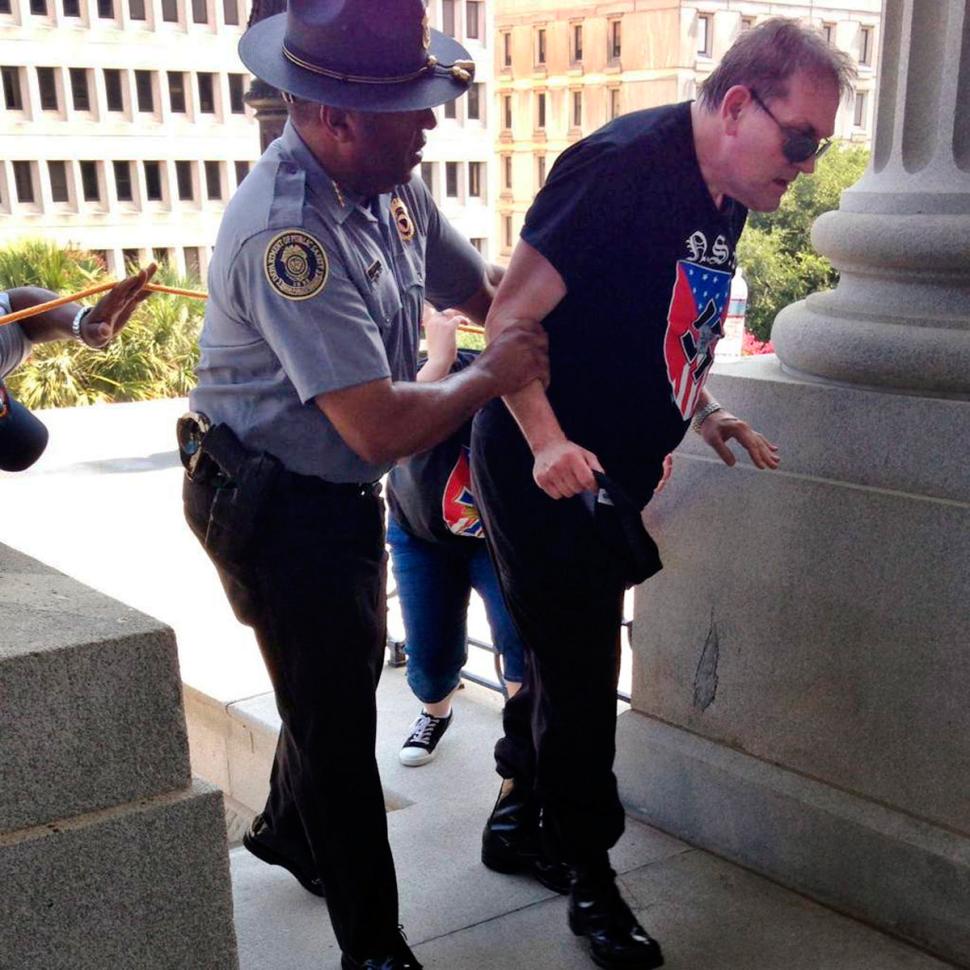 In a picture that appeared in several news outlets, Leroy Smith, a black man and South Carolina’s Director of Public Safety, noticed an older white man struggling with heat exhaustion and stepped up to help the man to a shady spot, water, and first aid.  Though the man was there at a rally wearing a shirt with a swastika on it and chanting racist slogans, Smith helped him anyway.

It occurs to me that each of us has an opportunity, at every moment and in every interaction with another, to choose behavior that reflects grace and selfless love, to live out the undeniable truth that we belong to each other.

Further, those who hold power and public positions that land them on the front page of the newspaper have a unique opportunity and even responsibility to demonstrate grace, to live out reconciliation, to refuse to use their power to dominate and subjugate those who are vulnerable, even though they can … even if they have every right to say, walk past a hate-filled protestor suffering from heat stroke.

Rep. Brower has a unique opportunity to model reconciliation, to lead the way in showing how we can relate to each other in community, but he’s choosing another way.  He’s in his rights to press charges, of course.  I suspect, however, that wielding the heavy hand of the criminal justice system will effect long term change about as effectively as one of his previous attempts to address the homeless situation in his district – the time he decided to personally patrol the streets with a sledgehammer, destroying homeless shopping carts.

What might happen if Brower chose a grace-filled forgiveness instead?  What kind of message would he send if he worked toward reconciliation and empowerment instead of punishment and further alienation?

We would be inspired to do the same, that’s what would happen.

We can’t make our communities safer, or more just, by taking Brower’s approach to legally or physically sledgehammering the most vulnerable among us, even if they make poor choices.  Instead, it’s Leroy Smith who speaks volumes and offers hope for our broken systems: grace and love, forgiveness and kindness, acting as if we belong to each other … because we do.  All of us.