Let There be Peace on Earth?

Let There Be Peace on Earth?

“Our prayers are with the victims, their families, and the first responders in San Bernardino.”

“Thoughts and prayers are with #SanBernardino.”

“My thoughts and prayers are with the victims, families, and brave first responders.”

“Please keep the victims of #SanBernardino California in your prayers.”

Perhaps channeling mine and maybe your anger, impatience, horror, and disgust with the empty platitudes of politicians who not only are on the payroll of the National Rifle Association, but who with their words effectively render impotent for most Americans the hope we as people of faith look for when we offer to God the carnage and violence of our country, the front page of the Daily News Thursday read: GOD ISN’T FIXING THIS.

This week our country—almost numb with the statistic of more than one mass shooting per day now in 2015—seems to finally be making some progress toward sanity. Yesterday, for the first time since 1920, the NY Times editorial board printed a column on the front page, above the fold: “It is a moral outrage and a national disgrace that civilians can legally purchase weapons designed specifically to kill people with brutal speed and efficiency.”

An editorial on the front page of the NY Times might just be an indication that something is changing, but even as someone who uses words for a living, I want to say to everyone opining on the matter, even the NY Times editorial board: don’t give me your thoughts and prayers anymore. I’m sick of them, and I sometimes wonder whether anything can ever change at all. The words of the prophet Jeremiah keep echoing in my mind: “They have treated the wound of my people carelessly, saying, ‘Peace, peace’, when there is no peace.”

This second Sunday of Advent, the Sunday of peace, we are still waiting in the dark. Waiting for hope to be born, looking for light in the darkness, longing for peace in our violence-ravaged country and in our own hurting lives. Ironically, on this Sunday, the lectionary offers us a little passage from the first chapter of Paul’s letter to the Christians at Philippi, in which he extends to them…you guessed it: his thoughts and prayers. “I am constantly praying with joy in every one of my prayers for you…it is right for me to think this way about all of you, because you hold me in your heart….”

Paul had a long and very affectionate relationship with the church at Philippi, as he did with the Thessalonian church we discussed last week, so maybe as he sat in the darkness of a prison cell and discouragement threatened to overwhelm him, he sat down to write.

You might recall that Paul went to Philippi initially for the express purpose of preaching in the synagogue there and founding a new community of followers of The Way. His choice of the city of Philippi was strategic; it was a leading city and the first stop on the famous and well-traveled Via Egnatia.

Paul probably arrived in the city of Philippi on his second missionary journey, but he didn’t find a synagogue there. Instead, he found himself down by the riverside, where he encountered a group of women praying. One of them was named Lydia, a successful dealer in purple cloth who opened her home to Paul and his associate Silas. They worked from this base to build a little community in Philippi, until they crossed the political powers that be in the town and ended up in jail there.

Harkening back to Sunday School lessons, you might recall that it was in that jail in Philippi that Paul and Silas kept their spirits up by singing and praying, until an earthquake shook the gates of their prison cell open.

And though they managed to break out of jail, Paul and Silas knew that their message was too onerous for the authorities in Philippi, and anyway, the little church they’d started was growing and thriving. So they went along their way, continuing their work across Asia Minor.

But it seemed like controversy followed Paul wherever he went. He insisted on preaching a gospel that was an affront to both Jews and Gentiles, particularly those who held political power, and so he ended up in jail again. It was from this next prison cell that scholars think Paul wrote to his friends in Philippi, sending…his thoughts and prayers.

I wonder if the church at Philippi, receiving this letter from Paul with an awareness that he was in jail again, their own livelihoods and even lives in danger, and this gospel they’d banked their lives on not really seeming to be changing much of anything…I wonder if they cracked open the wax seal on that scroll, carefully unrolled it, read Paul’s opening words we heard this morning, and then started to think to themselves: I am so sick of his thoughts and prayers. We are a community under siege. Paul himself is writing us from jail! What good to us are thoughts and prayers, when all we see around us is violence and death, and when all we long for…is peace?

You’ll notice, however, that unlike many of our leaders, who seem content to tweet benign messages that basically translate to no meaningful action whatsoever, the Apostle Paul does not stop with thoughts and prayers. Before he even gets into the meat of this letter, right here in this introductory passage, he lays out straight that all of this love and all of these prayers better well be creating a community in which tenacious commitment to the transformation of the world would “overflow,” he says…you must become people from whom a “harvest of righteousness” will go beyond their community, and impact in meaningful ways the world around them.

Paul, I’d think, is the perfect person to address the despair of well meaning people of faith—our own despair—because he is writing from the prison cell in which he is sitting because a powerful political machine is determined to stop the message of radical love he insists must come to be. Even from prison, Paul is unwilling to stop at thoughts and prayers, and has taken action that challenged the status quo and demanded something different.

He was writing to say that he expected the same from the little community in Philippi…and why wouldn’t he? Moving beyond thoughts and prayers to changing the world is exactly what Jesus did. And having had his own life changed by this message of love…watching communities transformed by the power of Jesus’ gospel, Paul keeps insisting that we must keep going. We must keep going, even when all we can see around us is a gathering darkness. Because we are Advent people who will wait and hope and work…until peace is born in us…and in our world.

This week it came to my attention that today, December 6, 2015, is exactly 150 years since the official ratification of the 13th Amendment to the US Constitution. You’ll recall that amendment reads, “Neither slavery nor involuntary servitude, except as a punishment for crime whereof the party shall have been duly convicted, shall exist within the United States or any place subject to their jurisdiction.”

We commonly laud other anniversaries ending slavery in the US, but all of them are only part of a longer narrative that led, finally, to this day 150 years ago.

The push among people of faith and conviction for an end to slavery began in the early years of the 19th century, and by the 1850s a young senator from Illinois was making impassioned speeches denouncing the moral legitimacy of the institution of slavery. By the time Lincoln became president, the country was in social and political turmoil, resulting in eleven states seceding from the Union and forming their own country. In an attempt to get them back in line, President Lincoln issued the Emancipation Proclamation, which some don’t realize only abolished slavery in the Confederate states—not in the Union states. At conflict within him Lincoln felt the pressure of trying to hold a fraying country together and moving decisively to end the enslavement of black Americans.

But after his reelection in November of 1864, Lincoln was finally fed up with the glacial progress of change and fired with the conviction that, “[i]f slavery is not wrong, nothing is wrong,”[1] and he threw his support behind the 13th Amendment, which finally passed through both houses of congress on January 31, 1865. President Lincoln then signed a Joint Resolution submitting the proposed 13th Amendment to the states.

That was a great day, too, but recall that an amendment to the Constitution needs the ratification of three-fourths of the states in the union.

Lincoln and so many others worked tirelessly to get those signatures so that slavery would be ended officially and finally by the Constitution, but predictably there arose from many corners objections to the amendment. Still, on December 6, 1865, enough signatures were secured and the 13th Amendment was added, finally, to the United States Constitution.

Years and years and years of work from so many brought that country to that day, but Abraham Lincoln, the president who worked tirelessly and at great personal risk, never saw it happen. He was assassinated almost 8 months before that day. Espousing a radical, unpopular message of love and justice and peace is going to take more than thoughts and prayers; sometimes it will take even our lives.

Thank you for your thoughts and prayers, but God isn’t fixing this. It’s up to us to act with courage as people of faith to change this mess we’ve created. St. Teresa of Avila wrote:

Christ has no body but yours,

No hands, no feet on earth but yours,

Compassion on this world,

Yours are the feet with which he walks to do good,

Yours are the hands, with which he blesses all the world.

…Christ has no body but yours. 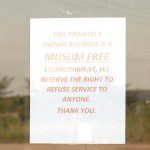 December 16, 2015 We Are Better Than This
Recent Comments
0 | Leave a Comment
Browse Our Archives
Related posts from Talk with the Preacher