Bathrooms, Baked Goods, and the Mockery of Religious Liberty 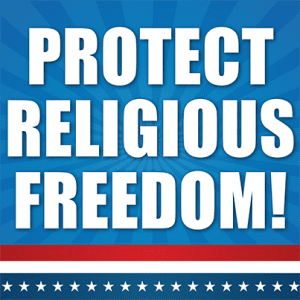 I think most Americans, even non-religious Americans, are on board with the idea of religious liberty — in the abstract. But like so many of the things we hold dear, what sounds great in theory becomes deeply complicated when the “rights” we cling to individually begin to conflict.

All of us have been watching news reports of contentious legal claims unfolding almost every day across America. From North Carolina to Mississippi and lots of other places in between, the stories vary in theme from contraception mandates to wedding cakes to who gets to use the bathroom where.

So perhaps religious liberty was on my mind a few weeks ago — in the abstract, of course — when I found myself traveling from Germany to New York. I boarded a huge airliner with hundreds of other people and settled in for an eight-hour trans-Atlantic flight. Exhausted after a long week, before I got on the plane I stood in line at the customer service desk and purchased an upgrade to a special seat in premium economy. It was more money than I wanted to spend, but at least I had a little more room to stretch my legs, and the seat was on the bulkhead!

As I found my seat I began to notice that almost all my fellow passengers were men, all dressed alike, obviously part of a very observant religious group. The man sitting next to me, in fact, was a member of the group. I said hello and began settling in for the flight. But just as I’d begun buckling my seat belt, my seat partner signaled for the flight attendant and explained to him that I would need to be moved to another seat; his religious freedom, he said, was violated by my presence, as his religion does not allow him to sit next to a woman who is not his wife.

I had so many thoughts in that moment.

Over the course of the flight several other issues came up in the cabin, each resulting in loud disagreements about religious freedom; they were issues related to other folks and their seatmates, food that didn’t meet religious standards, and the need to deal with solely male flight attendants. The end result was a noisy, contentious, and anxiety-ridden eight hours. Definitely not worth the upgrade fee, let me tell you.

It was such a strange turnabout, a moment when the abstract suddenly became painfully personal. I could see the leader of the religious group just a few seats over, and I wanted to go talk to him and say something like, “Listen, I get it. I’m a person of faith too, and I understand that it can be really difficult to hold beliefs that are counter to the culture around you. But trying to force everybody around you to conform to your view of the world is just as bad as the rest of the world trying to force you to conform to it.”

Religious freedom is just that: freedom. Note that we don’t call it “religious comfort.” In other words, yes, government should protect my right to practice my religion, but it’s not society’s obligation to make that practice easy or carefree. If your faith prevents you from sitting on an airplane next to a woman who isn’t your wife, then move to another seat. If your faith tells you you can’t go to the same bathroom with some people, then figure out how to order your life so that you use the bathroom in a place that seems appropriate for you. If your faith tells you you can’t sell wedding cakes to certain people, don’t go into the business of selling wedding cakes.

I’m a Baptist; I’m all for religious liberty. Many of my religious forebears have died to defend it, in fact. But the behavior I saw on the plane last week was not a legitimate demand for religious liberty, and neither are laws dictating where people can use the bathroom and whom I can refuse to serve in my business. All of those claims, in fact, make a mockery of the sacrifice of so many by twisting the ideals of religious liberty and using them to discriminate against others.

Faith requires sacrifice. And, frankly, if our faith causes us to feel so much conviction about the issues confronting us, then perhaps we should find a way to manage the inconvenience of making that sacrifice instead of trampling the rights of others.

April 20, 2016 When the Whole Church Works for Justice
Recent Comments
0 | Leave a Comment
"Any updates with the blog ?"
Stanley Sabbath as Radical Witness
"I really, really, really liked this article. Thank you. ♥"
maguilar9855 When God Gets Political: Enough
"To the author/researcher: I am wondering if you uncovered a time when, as Dr. King ..."
Judith March Hardie MLK at The Riverside Church in ..."
"Church is boring."
Ivan T. Errible Sabbath as Relationship
Browse Our Archives
Related posts from Talk with the Preacher