Refuse to be Amused

I think it is an objective fact that this presidential election is a circus, a national embarrassment.  Every morning just the practice of reading the headlines takes uncommon fortitude; at this point I’m prepared to say that very little surprises me anymore.  To think about what America looks like to the rest of the world is frightening to say the least.

Our insatiable appetite for bizarre entertainment makes me wonder if American voters have forgotten: this is not a sideshow; real peoples’ lives are on the line in America, and how we vote in this election will have significant impact on the day to day lives of struggling Americans.

Perhaps pastors see the struggle up close more than others, but I can look out over my congregation on Sunday mornings and see the faces of real people who are living paycheck to paycheck and, in my city, so many who are struggling through what amounts to nothing more than a nationwide housing crisis.

These things matter and we must make sure they matter to our politicians. Too often in American politics we confuse being citizens with being consumers. We confuse debate and policy with spectacle and entertainment. And how surprised can we be at that fact, when debates are marketed like wrestling matches and Alec Baldwin makes us squirm a little because his imitation of the Republican candidate is a little too real to be all that funny?

In 2016, we can click our tongues in disdain at how low the politics and the news media of this country have stooped, or we can take a step back and ask – is the blame so easily cast onto a few irresponsible actors, a few egomaniacs, the magnates of our click-bait economy? Or might some fault also lie with us, the clickers — the captive audience?

We have got to refuse to be amused. We’ve got to be the adults in a room full of squabbling children. Because we remember that at the receiving end of every irresponsible sound bite are people, people in America and around the world who wonder if their future and their safety and their prospects to live a good life hinge on the whims of someone to whom they are little more than a statistic…or a cartoon.

Politics is a dirty game. Politicians can be slippery characters. Everybody knows that. But the lesson we are learning in this country today, and one I think that’s taking people by surprise, is that the things we say matter. A climate of hateful language enables, in a very real way, violence and hate crimes. A debate in which issues like income inequality and global warming are barely broached makes it that much harder to treat those issues seriously.

The way you vote is not inconsequential.  These issues are not abstractions. Take it from someone who looks out over a congregation every week and sees the faces of real people.  These issues are human bodies, and worry, and real suffering that results when politics becomes the theater we’ve created.

Of all the people who have ever lived on this earth, the number who could choose their leaders is very, very small. Let’s try, Americans, despite the best efforts of those who would distort or pervert it: to be worthy of that right. 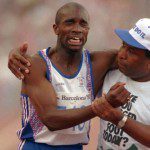 October 9, 2016 What Lies Within
Recent Comments
0 | Leave a Comment
"Any updates with the blog ?"
Stanley Sabbath as Radical Witness
"I really, really, really liked this article. Thank you. ♥"
maguilar9855 When God Gets Political: Enough
"To the author/researcher: I am wondering if you uncovered a time when, as Dr. King ..."
Judith March Hardie MLK at The Riverside Church in ..."
"Church is boring."
Ivan T. Errible Sabbath as Relationship
Browse Our Archives