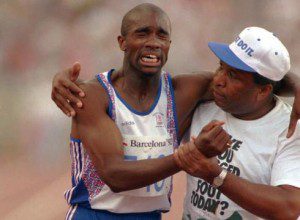 In addition to my well-known aversion to most animals (please do not judge me, and take the opportunity to watch me look extremely uncomfortable by coming to the Blessing of the Animals next Sunday afternoon), it is common knowledge that I am not as interested in sports as, say, some of my dear friends…or even my children.  I only attend games of any sort for the purpose of being with people I like.  I cannot carry on a conversation about sports, athletes, or any related subject for any significant length of time.  And I only exercise because I’ve been scared into a strong assurance that I will die very soon if I don’t.

This fact about the preacher should worry us all, because for the next several weeks we’ve been handed for our consideration the little New Testament book of 2 Timothy, which is shot through with sports references, analogies, and language.  In other words, I’m going to have to do my best to talk about sports in the pulpit.  Here we go.

1 and 2 Timothy are two letters supposedly written to a young leader in the church who worked with Paul—Timothy.  And if you take the beginning verses of each letter literally, it sure sounds like they were actually letters written by Paul to Timothy—you’ll recall the reading this morning began with the traditional three-part salutation found in almost every New Testament epistle: first a statement of the author (the text says Paul); a statement of the recipient (here, Timothy); and a traditional greeting (“Grace, mercy, and peace from God the Father and Christ Jesus our Lord.”).

And while this formula is typical, you may not be surprised to hear that most scholars are doubtful about the named author and recipient for various reasons, including the time references in the letter and the theology, which appears to differ pretty significantly from the letters we’re sure Paul wrote.  So today I’m going to go with the opinion that these were not actual letters from Paul to Timothy, but rather, as one commentator called them, “pious forgeries.”

Sounds a bit dishonest, but it wasn’t back then.  Leaders in the church wrote in the name of a well-known apostle, and in the case of 1 and 2 Timothy, the letters are written in the style of a wise elder imparting final words of wisdom to a son or beloved student.

You can read 1 and 2 Timothy in about 10 minutes, and when you do you will note that the books are full of very, very specific instructions for the first church, detailed directions for how to select and organize leaders.  These directives were applied to small Christian communities in the first century, but the modern church has gotten into all kinds of trouble trying to make the organizing instructions in books like 1 and 2 Timothy into cookie cutter directions for the way we organize Christian community.

Still, as I always say, while these letters were not written to us specifically, our work as modern readers is to parse them for culturally confined strictures and universal truths, then to be sure we pay attention to the lessons we need to hear.  Which is where sports comes in.

Probably the most familiar sports reference in the book of 2 Timothy is found in chapter four. You’ll recognize it, because it is often read at funerals: “I have fought the good fight, I have finished the race, I have kept the faith…”.  Remember that one?  But all throughout both first and second Timothy, the writer of the letters makes veiled references to the life of an athlete and compares it to the life of faith.  He seems to emphasize the three essential qualities of a successful athlete: strength, endurance, and flexibility, suggesting that these are three qualities the early Christians would need if they were going to survive the considerable challenges of living their faith in a world that not only disagreed, but persecuted them for their beliefs.

Today we have the very start of 2 Timothy to consider, where the writer is talking about the kind of strength Timothy will need to summon if he’s going to run the race set out before him.  To find it, the author of 2 Timothy seems to suggest, Timothy is going to have to look back, at what lies behind, to gather the strength he needs to push forward. ”Hold to the standard of sound teaching you’ve heard…guard the good treasure entrusted to you…remember the faith you have, a faith that lived first in your grandmother and your mother and now lives in you.”  Look at what lies behind, because running the race of faith may seem lonely at times, and our own stores of strength insufficient.  But when things get hard, and you feel your strength and resolve waning, and you know there’s no way you can keep going, remember the foundation that has been laid for you…the great cloud of witnesses standing with you and pushing you forward.  You are not alone.

Every Olympic games there’s a standout—an athlete with an unbelievable story of overcoming the odds to win the race.  These names get stuck in our memories, their faces on Wheaties boxes.  But sometimes the best stories fade into distant memory—many of those are stories, not about winning, but instead about heroically finishing.  It’s one of those that illustrates for me most powerfully what it means to draw strength from the race by reaching back for the strength of others who got you to where you are to begin with—through encouragement, example, support.

Derek Redmond is the runner who shattered the British 400-meter record at age 19 and headed to the 1988 Olympics in Seoul bound for a medal.  He injured himself at those games and, after 5 surgeries and relentless training, he was ecstatic to be headed to Barcelona in 1992 to try again for a medal—any medal—for running the 400 on the world’s stage.

The event that day in Barcelona would determine four finishers who would compete in the Olympic final, and the stadium was packed that day—over 65,000 fans, including Derek’s father, Jim, who had been with him through all the pain and heartbreak of the previous few years.  Derek had made a pact with his father: no matter what happened, he was going to finish the race.

Mark, set, go: the starting gun sounded.  Down the backstretch, only 175 meters away from finishing, Redmond was pulling out ahead of the pack, a shoo-in to make the finals. Suddenly, he heard a pop and felt his right hamstring tear.

Everyone watching could tell something had happened, because Derek suddenly slowed down, began hopping on one leg, and fell to the ground.  As he lay there, holding his leg, a medical team ran toward him, and rushing toward the track, too, was Jim Redmond, who raced down from the top row of the stands toward his son.

Laying on the track, Redmond realized his dream of an Olympic medal was gone. Tears were running down his face. “All I could think was, ‘I’m out of the Olympics — again,'” he said later. But as the medical crew arrived, trying to carry him out on a stretcher, Redmond refused.  “I made a pact that I would finish the race.”

The other runners had already finished before people realized that Redmond wasn’t dropping out of the race after all. In a true Olympic moment, Redmond lifted himself to his feet and started hobbling down the track.

The crowd slowly rose, beginning to roar with cheers, louder and louder. Through what he described as searing pain, Redmond heard the cheers, but “I wasn’t [trying to finish] for the crowd,” he would later say. “Whether people thought I was an idiot or a hero, I wanted to finish the race.”

One painful step at a time, each one a little slower and more painful than the one before, his face twisted with pain and tears, Redmond limped, and the crowd, many crying with him, cheered him on.

His father Jim finally got to the bottom of the stands, leapt over the railing, pushed away a security guard, and ran out to his son. “That’s my son out there,” he yelled back to security, “and I’m going to help him.” Jim reached Derek at the final curve, about 120 meters from the finish, and wrapped his arm around his waist.

If you go back and watch the video of this moment, I dare you not to tear up.  You can see Derek putting his arms around his father’s shoulders, leaning against him as he kept hobbling toward the finish line, and sobbing in pain and relief. Together, arm in arm, father and son, kept going, and a couple steps from the finish line Jim released the grip he had on his son so Derek could cross the finish line by himself.

With the crowd in a frenzy, the two hugged each other just across the finish line, crying, along with everybody there.[1]

You’ll notice in worship today that we are sharing communion, the table of Christ where we gather to remember the gift of grace that welcomes us all to the family of faith.  Today is a special communion Sunday, celebrated once a year, called World Communion Sunday.

This is a Sunday in which Christian communities all over the world will be sharing communion and thinking, not about the practices and beliefs that divide us, but instead about the gift of grace that we share, that draws us into community and connection so that we may gather the courage it takes to live our lives as agents of transformational change in the name of Jesus Christ.

Whoever wrote the little letters of 1 and 2 Timothy knew that gathering around the table, joining your life to the work of the gospel, would be a grueling race.  To run the race of faith we will need to draw strength from somewhere, and this table…and these people…this is just the place.  There are many who have run this race before us, so many who are cheering us on, and a world that needs us to keep going until we finish.

So when you get weary…when you don’t think you have the strength to go on…when the road stretches out ahead of you unending and you’re sure you can’t even take one more step…pause for a moment to look at what lies behind.  And then keep going, one step at a time, until you finish the race.  Amen. 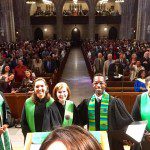 October 4, 2016 Refuse to be Amused
Recent Comments
0 | Leave a Comment
Browse Our Archives