Anatomy of a conference: Why God and Guns?

Anatomy of a conference: Why God and Guns? October 18, 2016 Amy Butler

At the beginning of October, The Riverside Church hosted God and Guns: Faith Leaders Address Gun Violence. Highlights from the day and video of the presentations can be found here. Over 100 faith leaders from across the country gathered in New York because they were tired of seeing on the news story after story of another shooting and feeling like there is nothing they can do. Throughout the day, participants were trained on how to talk to their congregations and communities about gun violence and mobilize for change. What they were not given was a cookie cutter mold — an exact plan to replicate identically across the country — because every community is different and what works in New York is different than Arizona.

The only constant is that doing nothing means nothing will change.

So here is what Riverside did, in our context, with our resources — the who, what, when, where, why of God and Guns. May it be helpful to you and your congregations as you find your something you can do.

It all started with a screening of The Armor of Light. After hearing a panel of the film’s subjects and director speak about the subject of the film — gun violence — we asked the Rev. Rob Schenk after the panel: what would it take to move the needle? What would it take in this country to change our culture of gun violence? “Faith leaders,” he said. “Especially younger faith leaders need to learn about this and gain the information and tools they need to begin talking with and organizing their congregations to speak out and change what has become a critical national health issue.” Schenk’s answer got us thinking that perhaps Millennial faith leaders would be especially lacking in information around this issue. What we didn’t realize was how many non-Millennial faith leaders desperately need and want information and impetus to begin organizing their communities.

Training. It had to be training. We thought the only way a conference on gun violence would have an impact beyond our walls is if we planned an event that equipped people to take action. The team of colleagues thinking about how to plan an event that would engage faith leaders around gun violence had been to so many conferences where the information they engaged was either navel-gazing entertainment or personal edification, or programmatic training that could not be fully applied in their setting. Beyond that, how many of us have attended conferences that are antiquated in their presentation and difficult to enjoy because they are poorly planned? We set out to try to build something compelling, accessible, relevant, and future thinking.

This idea was birthed early in the year, but we knew it would take months to plan. We also knew that by the last quarter of the year most of our colleagues would have spent their continuing education allowances. But the need for a training to help faith leaders gain the skills and information they need to help them talk with their congregations about gun violence seemed so urgent, we didn’t think we should wait until 2017. Plus, New York in February isn’t exactly your go-to in terms of destination travel. We chose October because we hoped it would be far enough ahead of Thanksgiving and Christmas that folks might consider coming. We also knew that Central Park in October is a wonder. And we suspected that many colleagues would want to learn more about gun violence and how to address it with their congregations sooner rather than later.

Here’s exactly where there might have been some interests conflating. We wanted to have the training at The Riverside Church because, well, New York. But also: every single Sunday I stand at the door and greet worshippers, I always encounter visiting pastors from all over the world who are on vacation and specifically planned to spend a Sunday of their vacations in worship at The Riverside Church in the City of New York. Riverside is like Disneyland for pastors. Those of us who work there remember our own feelings the first time we walked into a place so rich with the history of the American church. So all of those reasons were in play as we talked about doing God and Guns 2016. But also: as The Riverside Church continues to work toward imagining who God is calling us to be as a community of faith, it felt important that a critical piece of Riverside’s identity be stretched, and put into play in a way it has not been in recent years. As the pastor of this amazing congregation, I hoped we could together have an experience of being a gathering place for people of faith from all over the country to convene, to talk about critical issues, and to prepare to engage the world and change it. It was so important to me that the congregation of this church get engaged in the planning and running of God and Guns to experience in a significant way who we can be together moving forward. And they did.

This question has the most obvious answer: 30,000 deaths per year as a result of gun violence in America should be unacceptable to people of faith. Period. We are people who claim to embrace love, not fear, life, not death. For that basic theological reason alone we should be lining up to learn about how to end gun violence in America. That’s why. 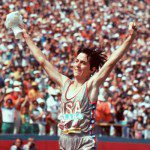 October 23, 2016 What Lies Ahead
Recent Comments
0 | Leave a Comment
Browse Our Archives