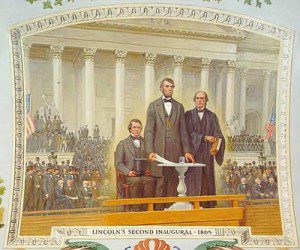 On Monday, March 4, 1861, as part of taking the oath of office for his first term as the sixteenth President of the United States, Abraham Lincoln delivered his first inaugural address. The situation in the country was dire.  Seven states had seceded from the union; Jefferson Davis had been inaugurated as the President of the Confederacy two weeks earlier.

Against the advice of those tasked with keeping him safe, Lincoln took the oath of office on the East Portico, then he addressed the country.  Can you imagine the task of speaking to the country that day?  Lincoln’s leadership task must have felt overwhelming.  Bitterly divided by ideological differences and poised on the edge of deadly conflict, America was in crisis.  Still holding out hope that they could, somehow, avoid this terrible war, Lincoln ended his speech with this impassioned plea:

I am loath to close. We are not enemies, but friends. We must not be enemies. Though passion may have strained it must not break our bonds of affection. The mystic chords of memory, stretching from every battlefield and patriot grave to every living heart and hearthstone all over this broad land, will yet swell the chorus of the Union, when again touched, as surely they will be, by the better angels of our nature.

“The better angels of our nature.”  I can’t think of more apt words to hear on this Sunday, the Sunday before a historic election day this week.  When we go to the polls on Tuesday, Americans must…we must…dig deep to summon the better angels of our nature.  Yesterday Pope Francis warned, “Fear is fed and manipulated, because fear – as well as being a good deal for the merchants of arms and death – weakens and destabilizes us, destroys our psychological and spiritual defenses, numbs us to the suffering of others, and in the end it makes us cruel.”[1]  As we vote this week, we must think about the bonds of affection that have created and sustained this great country and vote with our critical consciences fully engaged, rejecting fear and acting boldly with the hope of creating a more perfect union, where everyone has the opportunity to flourish.

Lincoln’s are lofty, beautiful words, and if you’re like me you’re probably thinking: I don’t even know what our “better angels” are, much less whether America can summon them.  Which is why I think it’s important that in the calendar of the church year, today is All Saints’ Day.  If there’s any day that we might begin to summon our better angels, it’s today.

While All Saints’ Day has changed in meaning over thousands of years, what it has come to mean to us is something like this: today we recognize the saints in our lives, those who have cleared a path for us, those who in their living point and pointed us toward a better expression of who we can be as humans—individually and together.  And for the witness of these saints, we are grateful.

Informing our thinking today is a passage from the Apostle Paul’s letter to the church at Ephesus, where he celebrates the saints there, giving thanks for their lives and wishing for all of them “a spirit of wisdom…so that you may know the hope to which he has called you…”.  In Paul’s words we can certainly recognize those who have gone ahead of us, perhaps those whose pictures we hold in our hands today.  But All Saints’ Day is anything but a nostalgic “wish you were here.”  You’ll notice that Paul calls those first, living and breathing Christians: saints.  Today is certainly a day to express our gratitude for how the lives of others have modeled faith for us.  But it is even more, a call to all of us to live fully into the better angels of our nature, to summon from within everything good we can muster, so that we—like all of them—become people whose lives reflect grace and love and mercy and justice and peace.

Most of you probably don’t think too often about the details of medieval history, but I am betting that some of you remember who Johannes Gutenberg was.  Gutenberg lived in the 1300s in Germany and he was one of those folks who was constantly coming up with the next great invention.  We remember him, of course, as the inventor of the printing press, and invention that totally revolutionized the church—by making the Bible accessible to common folk—and, really, the entire world, by making the printed word available to everyone.

What most folks don’t know about Johannes Gutenberg, though, is that before his invention of the printing press, he tried one hare-brained scheme after another to make his living.  One day, while working as a goldsmith and inventing on the side, Gutenberg had an idea he was sure would change the world—that manufacturing metal molds of letters which could fit into a frame might possibly have some potential as a lucrative invention.  As it turns out, he was right.  But while he was anxious to try his idea, he did not have the funds to create his new machine.  To make some quick start-up money, Gutenberg wracked his brain to think of something that would sell quickly.

Shortly after he’d dreamed up his idea for the printing press, word came to his village, Mainz, that there would be a festival in which relics from the Holy Land would arrive and be on display.  He knew that people would flock from all over Europe to get a chance to see these holy relics—a fragment of bone from an apostle, a vial of dirt from the ground beneath the cross, a scrap of cloth from a shroud Jesus wore—whatever the relics were, they were holy objects that faithful people wanted just to get a glimpse of—to have some connection to the holy.  And like any good innovator, he immediately saw the entrepreneurial opportunity at hand.

Here was the problem that Gutenberg thought he might solve: with the press of all those people who flocked from everywhere, it would be hours, days even, of waiting in line to get close to the relics.  And even upon getting close, chances are the crowd would prevent getting a good look at the holy relic.  Gutenberg thought if he could somehow provide a way for the pilgrims to see the relics, he might make enough income to build his printing press.

Gutenberg got busy then manufacturing small mirrors.  He mounted the mirrors on poles and sold them by the hundreds to the pilgrims, who, upon getting relatively close to the relics could raise their poles and look into their little mirrors, which would then be reflecting a clear view of the relic they longed to see.  As they gazed into their mirrors they would see then, just a little bit of the holy, enough to bolster their spirits and punctuate their long waits and their dismal lives with a little bit of the divine.

Do you know what it actually means to be a saint?  The word means, “God’s holy ones”, and I am thinking it might mean something like: who we are when we manage to summon the better angels of our nature.  All the people we are remembering in our hearts and in the pictures we’ve brought today were certainly not exceptionally holy…and neither are we.  But rather: we’re followers of a God who is holy.  And in our best expression of human living, our lives, like theirs… our sainthood, like theirs…are reflections of the holiness of God.

That’s what it means to be a saint—a reflection. Maybe, like Gutenberg’s mirror on a stick, our reflections are distant, rather small and sometimes far away.  But as saints, when the world looks at us they should be able to see, even if only very faintly sometimes, a reflection of God.  The spark of the divine, the better angels of our nature trying to emerge…from us.

With grateful hearts today, let us summon the courage to live into that sainthood.  We do it this week for the people we love.  And we must do it this week at the polls…for our country.

In a few moments we will take the pictures we’re holding, or the images we’re holding in our hearts, and hold them up.  High.  These saints shine in our lives like reflections of God.  And we can shine, too.  We can be the better angels of our nature, as we’ve been shown.  And so, we must try. And we will.

November 1, 2016
We Have to Start Telling Our Truths
Next Post

November 9, 2016 God Showed Up: A Meditation for the Day After
Recent Comments
0 | Leave a Comment
"Any updates with the blog ?"
Stanley Sabbath as Radical Witness
"I really, really, really liked this article. Thank you. ♥"
maguilar9855 When God Gets Political: Enough
"To the author/researcher: I am wondering if you uncovered a time when, as Dr. King ..."
Judith March Hardie MLK at The Riverside Church in ..."
"Church is boring."
Ivan T. Errible Sabbath as Relationship
Browse Our Archives