“Our people know about coffin ships — boats that sink to the bottom of the sea with everyone on board.”

Close your eyes and imagine the voice who said those words. Who do you a picture? An African-American describing slave ships on the Middle Passage? A Cuban refugee who knows what it is to cling to anything that will float 90 miles to a different world? A descendant of the countless Jews who fled Europe in the 1930s? A Syrian father remembering desperate attempts to keep his children afloat?

It’s likely you didn’t imagine the Irish brogue in which these words were uttered at the end of worship in my church a few Sundays ago. It was an Irish senator who said those words, and Senator Aodhán O’Riordáin said them as he invited the congregation to a Saint Patrick’s Day celebration — in our sanctuary. 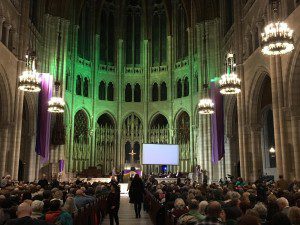 Less than a week after Senator O’Riordáin delivered his impassioned invitation, the sanctuary was aglow in green. The purple Lenten banners were still up, of course, but the lights bathing the front chancel had been changed to green for the holiday. And the nave, bursting at the seams with folks who had waited in long sidewalk lines in the cold and snow, was like a sea of green coats and sweaters, hats and “Irish Stand” buttons. The sounds of the bodhrán and the fiddle and excited conversation filled the air.

It was Saint Patrick’s Day, and in my hometown of New York Saint Patrick’s Day is quite a big deal. This big, city-wide party makes sense, as New York City claims the largest population of Irish Americans anywhere in the United States. Huge parades and elaborate festivals celebrating Irish music, culture and food happened all over the city, and you could feel the festive spirit just walking down the sidewalk.

With all the Irish bars filled to overflowing with tipsy revelers, it might seem strange at first glance to use the sanctuary of a church to join the celebration of this Irish holiday. But a closer look reveals that the story of the Irish people landing on America’s shores is something all people of faith and good conscience should take a moment to remember. All throughout Christian scripture we read instruction to both recall our own status as wandering strangers and to live our lives in a constant posture of welcoming those who are longing for home.

It wasn’t too long ago that no one in New York could have imagined a holiday celebrating Ireland and the Irish people. The forefathers and foremothers of the last week’s celebrating Irish Americans were largely immigrants who fled Ireland in the mid 1800s because of oppressive government rule and devastating famine. Back then, most natives of Ireland were small farmers who managed to eke out a living on tiny farms British landowners allowed them. Irish fed their families principally with potatoes, so when a great blight destroyed every potato crop in the land the people became desperate. The devastating effects of that famine resulted in Ireland losing almost half its population to death and emigration.

Of the almost two million Irish set out for the hope of a better life in the United States, almost a quarter of those who desperately boarded stinking, over-crowded ships did not survive the trip across the Atlantic. As Irish Prime Minister Enda Kenny said at the White House last week when he referenced Emma Lazarus’ poem on the Statue of Liberty, “We were the wretched refuse on the teeming shore.”

When the Irish landed on American soil, they threatened to take jobs away from Americans and strain welfare budgets, as many had spent every last cent they had on their passage and the conditions of the passage left many of them disease-ridden. Desperate for work, Irish took the most menial and dangerous jobs, often at low pay, jobs like construction, hourly labor, cleaning houses, working in textile mills. And to add to societal tension, most Irish were devoutly Catholic, not Protestant; they had different cultural traditions, and they spoke with strange accents.

Angry Americans, who were ironically just a few generations away from immigrant status themselves, accused the Irish of being criminals and rapists, called them names, and posted signed that read, “Help Wanted: No Irish Need Apply.”

Sound familiar? It should. Many of the same insults and accusations are leveled at our immigrant neighbors today. Our leaders don’t hesitate to vilify immigrants from Mexico, detain American citizens of Middle Eastern descent, and brush off the frightening increase in threats of violence toward Jewish communities. How quickly we forget that the story of the Irish is the story of us all.

Saint Patrick’s Day was yet another reminder that Christians in America are going to have to decide at some point whether or not the teachings of scripture will have an authoritative place in our lives or not, because the command to welcome the stranger is clear and unwavering through our entire holy text. But even if it weren’t, even if we could use clever hermeneutical tricks to side step God’s command, even if the loss of innocent life in the greatest humanitarian crisis of our generation didn’t compel us to open our hearts and homes, there’s one other consideration that should: we find God with the most vulnerable among us. Time and again God’s work is done through the one sold into slavery (Joseph), or exiled by war (Jeremiah), or the refugee fleeing genocide (Jesus).  Those of us who turn our backs on the immigrant are turning our backs on God.

Last Friday in the nave everyone was wearing green, celebrating. It was a celebration of the triumph of the human spirit, the power of community, and the transformational possibility of hope. Through the painful story of Irish immigration to America we lived the truth that there’s always enough to go around and that our differences make us better. As we imagine a future America and yearn to find God in the world around us, we need only look around us, right here, to see a beautiful diversity and the holy struggle of God’s justice unfolding in the stories of our neighbors.

“Those who cannot remember the past are doomed to repeat it,” the saying goes. Take it from my Irish American friends: we cannot afford to forget the past. 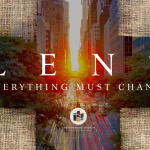 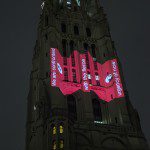 April 4, 2017 50 years after ‘Beyond Vietnam’: What’s changed?
Recent Comments
0 | Leave a Comment
Browse Our Archives
Related posts from Talk with the Preacher

The Wrong Jesus
Could I be following the wrong Jesus? "So after they had gathered,...
view all Progressive Christian blogs
What Are Your Thoughts?leave a comment
Copyright 2008-2021, Patheos. All rights reserved.
Close Ad