50 years after ‘Beyond Vietnam’: What’s changed?

April 4, 2017 marks the 50th anniversary of “Beyond Vietnam: A Time to Break Silence,” a speech the Rev. Dr. Martin Luther King Jr. delivered in the nave of The Riverside Church exactly one year to the day before his assassination. Our country will be marking the anniversaries of one of Dr. King’s more strident and urgent sermons and his murder under an administration endorsed by white supremacists. Let that sink in for a minute.

Within this context, it seems clear that the clarion call of “Beyond Vietnam” — it’s sharp, prophetic tone many historians believe signaled a downward turn in King’s popularity — is still too grating for our own ears. (Listen to the speech here.)

Every week as I stand in the pulpit of the storied Riverside Church where Dr. King called for an end to racism, poverty and militarism in America, I fight the temptation to despair. In 50 years, have we made no progress at all? In this place where the call to justice has gone out again and again it’s abundantly clear that our moral crisis is deeper than ever.

We don’t have separate water fountains anymore, but racial injustice races to the fore of our consciousness, never absent, only disguised, the cradle to prison pipeline rotting America from the inside out. In 1967, the United States was bombing one country. Today we are bombing seven. And today income disparity and poverty in our country are leaving 13 million American children hungry every day. What happens to a society steeped in perpetual racism, militarism, poverty? All the anxiety, confusion, guilt and fear become harder to name; muddled. And the cost of that spiritual impact is so deep, we cannot begin to know the ultimate price our humanity will pay.

Dr. King said 50 years ago, “We are called to speak for the weak, for the voiceless, for the victims of our nation, for those it calls ‘enemy,’ for no document from human hands can make these humans any less our brothers.” This was certainly a call to justice for the time in which he lived, and now his words ring timeless as they truly call us to move beyond Vietnam to embrace our own prophetic task.

“Beyond Vietnam: A Time to Break Silence” voiced challenges fundamental to the human experience.  On its 50th birthday it joins the ranks of timeless words for which people have been killed, speeches that we repeat over and over desperate to remember their truth and challenge: the Sermon on the Mount, the Gettysburg address, the Ballot or the Bullet. It’s a call that rings from the halls of history, inviting us to find our voices and the best expressions of who we are, and to move society forward.

And we have. In America, the murder rate is now at a 50-year low. Millennials are four times more likely to hold college degrees than their grandparents. There is now greater visibility in the workplace and politics for all minorities, including women, people of color, and LGBT people.  In the last 50 years we’ve passed the Civil Rights Act, the Voting Rights Act, Title IX and nationwide marriage equality. “Beyond Vietnam” is not a sad testimony to the unchanging nature of injustice. Rather, these are iconic words that should be sealed in our memories, words that remind us where we were, help us remember how far we’ve come, and keep calling us toward a dream we share.

It has been 50 years since Dr. King asked us to move our nation beyond Vietnam toward a society and a world filled with peace and opportunity and flourishing for everyone. The problems we share now are different problems, but the task is the same. We are brothers and sisters to one another. We must keep working to create a world that is just and peace-filled, so that perhaps 50 years from now someone might repeat our own words and courageously do the prophetic work of that moment.

In the words of Dr. King, “Now let us begin. Now let us rededicate ourselves to the long and bitter, but beautiful, struggle for a new world.” 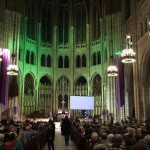 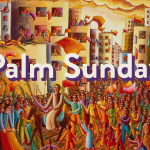 April 9, 2017 Everything Must Change: Protest
Recent Comments
0 | Leave a Comment
"Any updates with the blog ?"
Stanley Sabbath as Radical Witness
"I really, really, really liked this article. Thank you. ♥"
maguilar9855 When God Gets Political: Enough
"To the author/researcher: I am wondering if you uncovered a time when, as Dr. King ..."
Judith March Hardie MLK at The Riverside Church in ..."
"Church is boring."
Ivan T. Errible Sabbath as Relationship
Browse Our Archives
Related posts from Talk with the Preacher