The next few posts are reflections on a trip to Israel/Palestine this month.  Follow me @PastorAmyTRC on FB or Twitter, or search the hashtag #HolyWomenHolyLand to see even more from me and my colleagues.

Knowing that an interfaith group spending a week and a half talking about very intense conflict was going to require information and perspective I didn’t yet have, it seemed important to try to get my feet under me before I jumped in.

For me that meant basic things, like learning the exchange rate and figuring out how to charge my cell phone and learning what the food was like and trying to conquer jet lag. But it also meant some more substantial things, things that I knew would be required so I could fully engage in the work ahead of me. I needed to understand the map…the MAPS, that is…as who creates the maps determines what they say. I needed to experience the land, too: what’s the distance between important places? How big is Israel? What makes up Palestine? Then, I needed to understand language. Not learn to speak Hebrew or Arabic, of course, but rather learn to recognize the characters of the different languages on signs, because the language on signs tells you a lot about the political and social environment in which you’re standing.

And, I had to learn a new English vocabulary. Words like “occupation” and “security” and “police” and “border check points” mean different things to different people, and conversations can take sharp turns depending on the language you use. 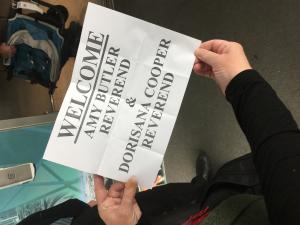 As I’m here with an interfaith group for the purpose of learning about the Israeli/Palestinian conflict, the trip I was about to take would be a very different Israel trip than the one I took last time I was here—22 years ago—with a bus full of loud Americans in white tennis shoes who were only interested in the possibility of somehow discovering and taking home a piece of Jesus’ cross. But I am also a Christian, and though I’m not that interested in finding a piece of the cross, I did want to see some of those sites one might visit on a regular Jesus Tour.

And so, to accomplish all of these things, I set out with another minister (Rev. Dorisanne Cooper, Watts Street Baptist Church, Durham, NC) for two days of Jesus touring.

Afternoon #1, after arriving at Ben Gurion Airport in Tel Aviv, we set out on our own to explore the Old City of Jerusalem. The Jaffa Gate in the wall of the Old City was about a ten minute walk from our hotel, so we wandered 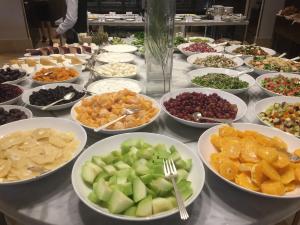 around taking in the sites and sounds of what surely is the Times Square of Jerusalem: cheap souvenir shops, loud peddlers trying to catch our attention, food stands, and crowds and crowds of tourists. We wandered down to the Church of the Holy Sepulchre, brains fogged by jetlag, and tried to feel the city—the air, the people, the buildings.

The next morning we met a guide, Mike, who took us in a van ride to Caesarea. Along the way he showed us maps, helped us understand a the geography of our journey, and told us what life in Israel is like. As an Israeli who had made Aliyah (a Jew born outside Israel coming back to claim Israeli citizenship), Mike told us why Israel is so important to him. He also described his kids’ army service with pride, and told us the all the best things about Israeli food. 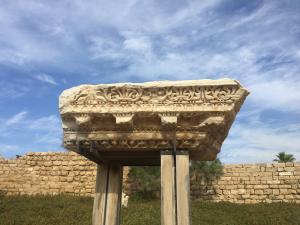 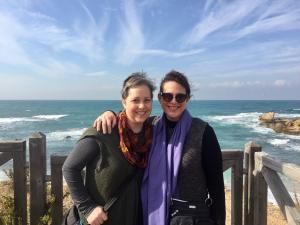 Caesarea was a great place for the Jesus Tour to kick off, as it’s really the place where Christianity began to spread throughout the ancient world. There at Herod’s palace, where Pilate also lived, we recalled that Paul and Peter were imprisoned there and that so many boats came and went from the impressive port Herod built. The air was filled with salt, birds crying overhead, the sounds of waves crashing against the shore. Incredible Roman ruins helped us imagine what life might have been like when Paul was writing the letters that are now in our Bibles as the Epistles.

Next we climbed up to Megiddo, Armageddon, some call it, and surveyed the areas where Jesus grew up and spent most of his ministry. All that we learned about how many devoted members of the major monotheistic religions of the world believe that the world will end in that very spot gave us a powerful backdrop to the religiously charged and deeply embedded conflicts of the region.

As the sun began to set we got to Nazareth, to the Basilica of the Annunciation—the spot where pilgrims go to remember the angel Gabriel coming to Mary to tell her she was pregnant with Jesus. The beautiful church there was among my favorite church visits on the trip, the sanctuary adorned with incredible art depicting Mary and gifted by different countries around the world.

We spent the night in Tiberias and woke up to an incredible sunrise on the Sea of Galilee. After breakfast we went to 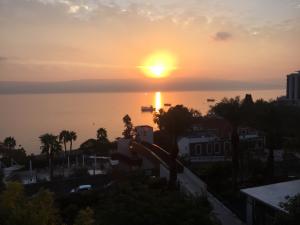 Jesus spot after Jesus spot: Mount of Beatitudes (where Jesus supposedly gave the Sermon on the Mount), Tabgha (Loaves and Fishes), and Capernaum, where Jesus taught in the synagogue. Incredible archeological sites helped us imagine what the area might have looked like when Jesus and the disciples wandered around the hillsides. We finished that day with a boat ride on the Sea of Galilee in a boat built to look like a boat that might have sailed on the Sea of Galilee in Jesus’ day. As a cool aside, we saw a boat from the first century and learned about the amazing restoration efforts undertaken to preserve it. 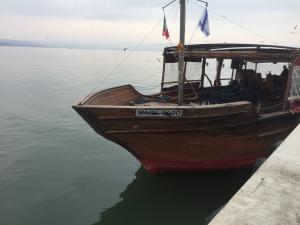 Although quite a lot of these stops were touristy, the second to last stop at the Jordan River made me feel the most like an American Christian tourist. We watched some folks in white robes get baptized in the river, with a view that allowed us to see a swimming otter interrupt a woman’s holy experience. It was quite hilarious, actually.  Also, it seems important here not to forget the camels. 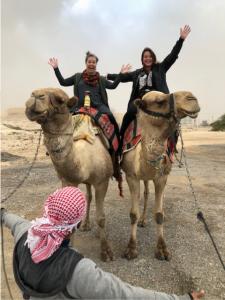 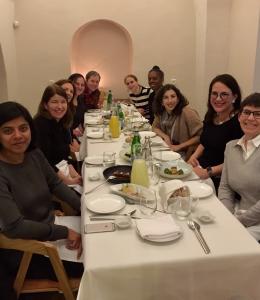 Seeing the sites on the Jesus Tour was amazing, but getting a first taste of the cultural and religious currents running through this holy land was the most important part of the Jesus Tour. It laid a strong foundation for the critically important experiences and conversations just around the corner.

And when we wandered into the lobby that night at 7:30, we finally met the amazing companions who would be our fellow travelers and eventually dear friends through the experience ahead. 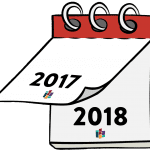 January 10, 2018 #HolyWomenHolyLand: I Come to the Garden…With a Whole Group of Holy Women
Recent Comments
0 | Leave a Comment
"Any updates with the blog ?"
Stanley Sabbath as Radical Witness
"I really, really, really liked this article. Thank you. ♥"
maguilar9855 When God Gets Political: Enough
"To the author/researcher: I am wondering if you uncovered a time when, as Dr. King ..."
Judith March Hardie MLK at The Riverside Church in ..."
"Church is boring."
Ivan T. Errible Sabbath as Relationship
Browse Our Archives
Related posts from Talk with the Preacher

Scott Eizember Clemency Letter
Scott Eizember - Wednesday, December 7, 2022 at 9:00 AM Meeting...
view all Progressive Christian blogs
What Are Your Thoughts?leave a comment