#HolyWomenHolyLand: We Have a Dream

This week in particular it seems appropriate to continue reporting on the #HolyWomenHolyLand trip with a quote from non-violent Palestinian activist and political leader Issa Amro, who met with our group after an emotional walk through the formerly bustling Palestinian city of Hebron.

Issa Amro grew up in the city of Hebron.  He was in college when the Second Intifada began and the presence of Israeli troops in the West Bank increased significantly.  During that time Issa began to realize that Palestinians are people who are regularly stereotyped: we like to die; we celebrate the loss of our children; we prefer violence to peace.

“But that’s just not true.  We are people, and most of us deeply desire peace.  We love our children, just like you do.”

Issa said, “Dr. King is a hero of mine.  I try to live what he preached about nonviolent protest.  But if I could change anything about him and his words, I would change the phrase in his famous speech in Washington in 1963 from ‘I have a dream,’ to ‘We have a dream.’  Most Palestinians are not active in the work of building a movement.  But we are building little by little, together, working to break stereotypes until we make peace.  Together we must resist occupation and build a movement.  WE have a dream!”

After telling us of his own experiences, which include being stripped naked and being told to kneel and not to look into the eyes of the officers questioning him, Issa said: “[The Israeli occupation] is changing the history of my life right in front of my eyes.  I can’t walk on the streets of my town, I cannot visit my friends, I have been issued an ID card with a number—which has replaced my name when I am talking to the Israeli army.  It’s illegal for more than 10 Palestinians to gather in one place.  I often wonder: if you’ve suffered, as the Jews have, then you know the pain of racism and discrimination.  So why are you doing this to me?”

“I want to be someone else.  I could be a star somewhere, using my engineering skills to do good work.  But out of duty I am here, trying to lead nonviolent resistance.  I was not born into this world not to care about others.  I was born to make change.  It is our religious and human rights duty to make a change.  Social activism is the only way I know to stay above the hopelessness.” 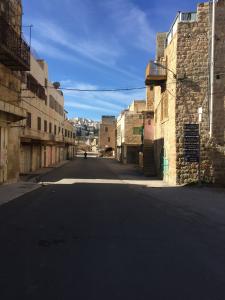 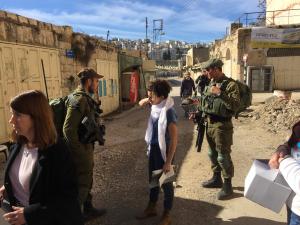 Our group entered Hebron that morning near the Tomb of the Patriarchs and we encountered what appeared to be a completely deserted village.  We were led through the city by former Israeli soldiers who work in an organization called Breaking the Silence.  Breaking the Silence is a group of “veteran combatants who have served in the Israeli military since the start of the Second Intifada and have taken it upon themselves to expose the Israeli public to the reality of everyday life in the Occupied Territories. We endeavor to stimulate public debate about the price paid for a reality in which young soldiers face a civilian population on a daily basis, and are engaged in the control of that population’s everyday life. Our work aims to bring an end to the occupation.”

Some view them as heroes; others say they are “airing Israel’s dirty laundry.” But they are strident in their commitment to truth-telling and steadfast under attempts to discredit them, death threats, public maligning, and constant harassment.  The stories these soldiers told us were heartbreaking and, frankly, chilling.  They insist that the occupation is “structural and systemic injustice,” and they want to help the average Israeli understand “what you send us to do.”

Because of the violence in H2, strict laws have been introduced.  Vehicles were removed from the streets; Palestinian shops were closed down en masse; and the streets were “sterilized” (Palestinians cannot walk on the streets in front of their houses, in some cases). Currently in H2, Palestinians experience 70% unemployment; 70% of the population living under the poverty line; 30% of the population living in extreme poverty (on less than $500/month); and 42% of former Palestinian housing is now deserted.  For the 850 or so Jewish settlers in Hebron, there are 600 Israeli soldiers assigned to keep the peace.  There are two different sets of laws in his section of Hebron—one for Palestinians and one for Jewish settlers.  Because of this, Palestinian rights are often secondary or even suspended.  A few Palestinians remain in their homes, but they have to climb on roofs and through backyards to go anywhere, since they are not allowed on many streets.  I could say so much more about the deserted city in which we walked, but if you want to know more, please: take the time to watch this film about a woman who has stayed in her home in Hebron despite all of these limitations. 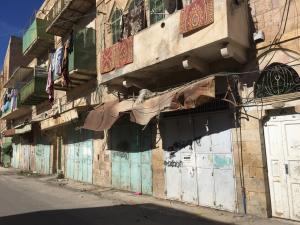 Meanwhile, Jewish settlers are constantly expanding the territory they control, using ongoing violence between Palestinians and settlers as justification.  “You kill, we build,” is a saying we heard a lot. Issa Amro had some hard words about the Jewish settlers in Hebron, liking negotiations with them to “negotiations with the KKK.” “The settlers are not here for religion,” Issa says.  “They are here for money, and they are destroying the Jewish reputation.”

The deserted area around the old Jewish quarter, our guide told us, is “occupation in a nutshell.” 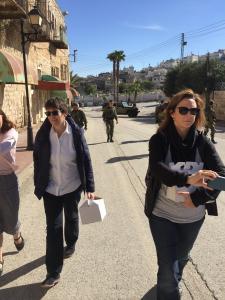 I want to say a few words about how it felt to walk through this section of Hebron.  We went to many dangerous and conflict-ridden places on our trip to Israel and Palestine, but this experience was the only one in which I felt truly afraid.  Israeli soldiers monitored our every move and walked along with the group as we moved through the city.  Jewish settlers harassed our guides by shouting over them and following them (and us) with cell phones, recording our faces and the words of our guides.  Toward the end of the walk through Hebron settlers in cars sped past us again and again, swerving close to our group in menacing ways. It was clear that we were not welcome in Hebron, and that Breaking the Silence is viewed with contempt.  It’s hard to imagine what it would feel like to live your whole life in such conditions.

As I remember our walk through Hebron, I keep thinking of Issa Amro’s words: “I would change it to we have a dream.”  The glaring problem with no apparent solution in Hebron is that there is no WE.  People in Hebron are cut off from each other, living in fear, suffering under unjust legal and military power, and there seems to be no end in sight.  The only way I could even imagine a move toward peace is to begin with telling the truth.

As we experienced walking along the road with Breaking the Silence, the truth seemed to be much more than inconvenient here.  Truth-telling (or not, as the case may be) in Hebron is, very practically, a matter of life and death.

January 26, 2018 #HolyWomenHolyLand: Women Wage Peace
Recent Comments
0 | Leave a Comment
"Any updates with the blog ?"
Stanley Sabbath as Radical Witness
"I really, really, really liked this article. Thank you. ♥"
maguilar9855 When God Gets Political: Enough
"To the author/researcher: I am wondering if you uncovered a time when, as Dr. King ..."
Judith March Hardie MLK at The Riverside Church in ..."
"Church is boring."
Ivan T. Errible Sabbath as Relationship
Browse Our Archives
Related posts from Talk with the Preacher