What’s In A Magical Name? When To Change, How To Choose

Back when I chose Scarlet Magdalene as my magical name, the intent was to piss off a misogynistic fundie Catholic in the Golden Dawn who called me the “Whore of Babylon” behind my back. It stuck. Or rather, the name I chose for myself did. It stuck so hard I kept it over a decade after I left the Golden Dawn and ceremonial magic in general.

I’m now involved in trad craft, Hekate is my tutelary deity, and my name makes less and less sense with each passing year. Yet I’ve barely questioned it because I simply settled in and got comfortable. Maybe too comfortable.

What is a magical name?

First of all, you don’t have to. But it’s a thing within certain initiatory witchcraft traditions to pick a name that makes sense for your path. There’s a name you take that is your outer court name and another that is inner court, better known as “those who are initiated”.

In the Golden Dawn, you take on “magical mottos” which isn’t a terribly dissimilar concept. They are usually in Latin, Greek, or Hebrew and you are referred to by your initials. The mottos are supposed to be your magical intent, and you basically grow into them. And similar to the outer/inner court names, you have outer order and inner order mottos.

So there’s the name fellow initiates know you by, and those the rest of the world know you by.

You don’t have to be an in initiatory path to take on a magical name. But some choose to do so anyway.

How do you choose a magical name?

It’s a personal matter. Once you find the right one, you typically know. It just hits you.

But don’t stress over it. It’s not forever; you can change them at any time. What may suit you now may not suit you a year or two or ten years from now.

How do you know when it’s time for a new magical name?

Major life changes, usually. Whenever you feel that the one you have no longer suits you or your purpose. You’ll likely feel it, or something will occur that will make you see it.

Sometimes major revelations will bring it on. It certainly did for me, and I have a lot of processing to do.

It’s okay to change your magical name. They’re not your name forever, or at the very least they don’t have to be.

It’s time for me to choose a new one.

Not only does the old one not make sense anymore, but I’m approaching a new point in my life. I’m reevaluating a lot of things. And I let things just stay the way they were despite having undergone so many changes.

I let the Scarlet name hang on too long. I guess I just got used to it, got too comfortable, and just didn’t really examine it too closely. Likely I’ve done this with a few things.

I’ve already changed my name on FB but won’t be changing pics or urls for a long time, if nothing else for people to get used to the switch.

As of now, I’m River Enodian. The last name is an epithet of Hekate meaning “of the crossroads.” I’ve been doing an awful lot of work with the element of Water as of late, so it hits just right: “River of the crossroads.”

“I call Enodian Hecate, lovely dame, of earthly, wat’ry, and celestial frame,
Sepulchral, in a saffron veil array’d, leas’d with dark ghosts that wander thro’ the shade;
Persian, unconquerable huntress hail! The world’s key-bearer never doom’d to fail
On the rough rock to wander thee delights, leader and nurse be present to our rites
Propitious grant our just desires success, accept our homage, and the incense bless.”

October 26, 2020
Witchcraft Is Political, Which Is Why I Am Anti-Fascism And Anti-Trump
Next Post 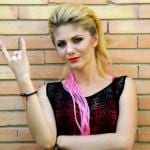 November 3, 2020 Responsible Magic: The Importance About Caring About Other People
Recent Comments
0 | Leave a Comment
"Hmmm... Magic workings for this time of year? Thanksgiving rites, thanking the Earth and the ..."
Kyllein MacKellerann Magic During Samhain: What Types Of ..."
"With respect, age has nothing to do with energy. There are 20 year olds who ..."
Shantel Collins On Segregation In Pagan & Occult ..."
"I've long said that the best thing about Paganism is that it's individual, smiths work ..."
Virginia Fair Richards-Taylor Why I Absolutely Loathe And Despise ..."
"As a female Wiccan of +50 years I was surprised that there was a comment ..."
Fae Sidhe On Segregation In Pagan & Occult ..."
Browse Our Archives
Related posts from Tea Addicted Witch