Is God the Biggest Serial Killer of All Time? – A Response to the Friendly Atheist

The Friendly Atheist is one of the most influential atheist blogs on the Internet. The website’s 10 bloggers have contributed to CNN, Fox and Friends, NPR, the Washington Post, and the USA Today.

You may be surprised to read this, but I owe the Friendly Atheist a personal debt. My atheist brother invited me to officiate at his wedding ceremony with this condition, “As long as you don’t say anything about God.” I’m very close with my brother, so of course I agreed. I wrote the majority of the wedding ceremony with no problem. I easily secularized everything else, but was stymied by how to secularize the final blessing.

Since Google has all the answers, I typed the words “secular wedding ceremony blessing” into my search engine. The first link that appeared was the Friendly Atheist’s article “A Secular Wedding Ceremony from Start to Finish.” The entire transcript for the secular wedding is beautiful. As I spoke the words of the Friendly Atheist’s final blessing, I experienced a profound sense of awe:

May the glory which rests upon all who love you, bless you and keep you, fill you with happiness and a gracious spirit. Despite all changes of fortune and time, may that which is noble and lovely and true remain abundantly in your hearts, giving you strength for all that lies ahead.

My brother and his wife expressed their appreciation for those words. My dad, a devout Christian, said it was the perfect capstone to the wedding. And all I could think were words of gratitude. “Thank God for the Friendly Atheist,” I said to myself.

Because I have great respect for the Friendly Atheist, I was deeply humbled when contributor Terry Firma responded to one of my recent article. My article is titled, “Don’t Tell Me that God is in Control: On Sovereignty, Tragedy, and Sin.” It’s about a horrific tragedy in my community where three children were killed by a car that ran a red light. In response to people saying, “God is in control” and “Everything happens for a reason,” I wrote that God isn’t in control of such tragedies. God isn’t sovereign in the sense that God causes such events to occur. Rather, God is “sovereign” in God’s ability to empathically suffer with us and lead us to suffer with one another.

Terry appreciated my comments about empathy, but couldn’t grasp the concept that God empathizes and suffers with us:

For real? He suffers? The Almighty, the biggest serial killer we’ve ever known, suffers – just like those parents of the three dead children do, you reckon?

An all-powerful, all-knowing entity empathizes? After either causing the accident or not lifting a finger to prevent it? He feels the parents’ pain?

I would more or less understand this if Ericksen were a Deist who thinks God created everything and then permanently retired, leaving his grand experiment to unspool according to the input and interaction of all human players. But Ericksen’s blog frequently refers to prayer, and he believes in the Bible, and he says that God’s greatest goal is to ultimately heal and console all of us.

I’ve had some communication with Terry since he posted his response. Terry is everything I would hope for from someone who blogs at the “Friendly Atheist.” But let me propose a friendly stop to my new atheist friend. For clarification, I don’t “believe in the Bible.” This is one of the biggest misconceptions about Christianity that both Christians and atheists make. Here’s the thing, Christians shouldn’t believe in the Bible. That’s a form of idolatry called bibliolatry. There is an important reason that we are not called “Biblians.” We are called Christians. That’s because we believe in Jesus Christ. Take Jesus’ own words for example, “You search the scriptures because you think that in them you have eternal life; but it is they that testify on my behalf.”

For Christians, the Bible is important in the sense that it points to Jesus as the ultimate revelation of God. Who is God? The Christian answer isn’t found in random passages of the Bible. It’s found in Jesus Christ.

Why does that matter? Because, as Michael Hardin points out, Jesus had an interpretive principle for reading the Bible. In Hardin’s words, Christian need to understand “How Jesus Read His Bible.” It’s important for Christians to know that Jesus was a cherry picker. He did not treat every verse in scripture with equal importance. In fact, he picked one strand of verses over another strand.

Those two strand of verses permeate the Bible. The first strand claims that God desires sacrifice. It claims that God is angry at human sin and that God’s wrath needs to be appeased. Sacrifice then becomes a “pleasing odor to the Lord.” Ahh, God is no longer angry. You do not need to fear God’s divine Hulk Smash after making a sacrifice. In this view, God is violent and humans are victims of his just wrath. If you read violent passages in the Bible with a violent view of God, then sure, you will conclude that God is “the biggest serial killer we’ve ever known.” No one can deny that there is horrendous violence in the Bible that is attributed to God.

But does that violence point to Jesus? After all, if Jesus is the full manifestation of God and God is violent, then why didn’t Jesus kill people? Because Jesus came to change our understanding of God. Jesus didn’t do that by going against the Bible, but emphasizing the second strand within the Bible – the non-sacrificial strand of love. Jesus firmly planted himself within this strand when he quoted the prophet Hosea and stated that God “desires steadfast love and not sacrifice.”

Jesus fulfilled the Jewish tradition that led to the theological statement that “God is love” and that God desires us to live in relationships of steadfast love and not violent sacrifice. Jesus never lifted a violent finger to his enemies because God has nothing to do with violence and everything to do with nonviolent love that offers universal forgiveness. 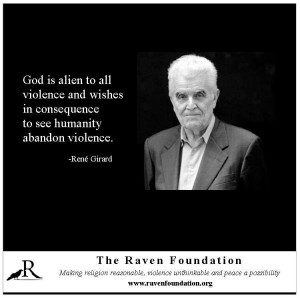 That love was concretely revealed on the cross. The Atonement is where we see the answer to Terry’s question, “For real? He suffers?” Yes. On the cross we discover what has always been true about God. Rather than inflicting violence and suffering upon us, God absorbs human violence and offers divine forgiveness in return. God can’t prevent human violence. Jesus prayed that he wouldn’t have to drink the cup of human wrath and that there would be another way. That other way would have been the same way humans have dealt with violence throughout our history – with more violence. But Jesus revealed that the way of violence is not the way of God. Rather, God stops our cycles of violence by responding with forgiveness. And so in response to the wrath of human violence, Jesus spoke these words, “Father, forgive them, for they know not what they do.”

Jesus, God-with-us, didn’t use violence to kill anyone. He didn’t pray for God’s vengeance upon his enemies. Instead, he transforms our understanding of God. And so, Terry doesn’t believe in a god who “is the biggest serial killer we’ve ever know.” And frankly, because of Jesus, I don’t believe in that god either.

So, yes. For real. God suffers. God empathizes with us. God has been in human shoes. God weeps with us. And God calls us to weep with one another.

March 13, 2015
Facing My Mortality: Reading the Compline, Part 3
Next Post

March 17, 2015 Why Was Jesus Crucified? Curriculum Writers Discuss Their Answers, Part 3
Recent Comments
7 Comments | Leave a Comment
"Church is boring."
Ivan T. Errible The Poor Own The Kingdom — ..."
"" … and the Word became Flesh." That "Word made Flesh" is Jesus Christ.Furthermore, if ..."
Ocelot Aardvark Why You Should Run from “Bible ..."
"nice article."
Brandon Roberts The Gospel is Countercultural: Politics, Palestine, ..."
"What cave do you live in?"
Monday's Child The Left Hand of God – ..."
Browse Our Archives
Follow Us!

Actually, He Died
Several Christmas Eves ago, Jeanne, Justin and I were invited to share...
view all Progressive Christian blogs
What Are Your Thoughts?leave a comment
Copyright 2008-2020, Patheos. All rights reserved.