Why Jesus Was Theologically Irresponsible 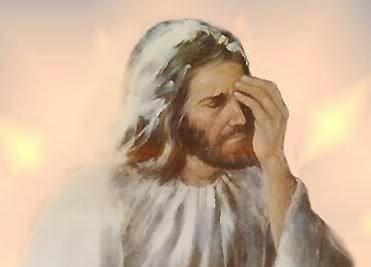 I received a comment yesterday on an article that suggested I was being “theologically irresponsible.”

In other words, I’m a bad theologian.

Fortunately, before I responded by defending myself and accusing my interlocutor, I took a step back. After a few minutes, the sting of being called “theologically irresponsible” faded and I had an epiphany.

He was right! I am theologically irresponsible!

Here’s the statement that was “theologically irresponsible” and made me a bad theologian:

When we use the Bible as a means to accuse others of immorality, we have turned the Bible into a satanic idol.

I loved that line so much that I put it in italics! But, I must admit, I can understand why someone would think it’s an irresponsible statement.

It’s thought to be irresponsible because, let’s face it, the Bible has God making some pretty serious accusations. The atheists are right. God can seem like a violent jerk. And it’s not just the Old Testament where God seems to demand sacrificial violence against Israel’s enemies. God is often portrayed as a pretty big jerk in the New Testament, too. Accusations are made in the name of God in both testaments.

Who gives me the right to be “theologically irresponsible?” Jesus does.

Jesus had a particular way of interpreting the Bible that many of the religious elite thought was theologically irresponsible. Many today would accuse him of being a bad theologian. In fact, Jesus “was numbered with the transgressors.”

For example, some Pharisees came to Jesus and were upset that he was hanging out with sinners and tax collectors. In other words, they thought he was being theologically and ethically irresponsible. After all, much of their scriptures said that they should avoid such sinners.

Jesus cut through their theological rigidity by quoting the prophet Hosea, “Go and learn what this means, ‘I desire mercy, not sacrifice.’”

From within his Jewish tradition, Jesus had a particular way of interpreting his scriptures. Following Hosea, Jesus interpreted through the lens of mercy, not through sacrifice.

In his book, Jesus the Forgiving Victim: Listening for the Unheard Voice, James Alison offers this reflection on the importance of this passage. James writes that the Hosea verse,

… is a reading instruction, a hermeneutical key. Whenever you interpret anything, you can read it in two ways: in such a way that your interpretation creates mercy, and in such a way that it creates sacrifice. Whenever you interpret anything morally, whenever you engage in any act of religious discrimination, as in your disapproval of the people I hang out with, are you obeying the word ‘I want mercy, and not sacrifice’? It is perfectly possible to interpret the law in such a way that demands sacrifice, creates a group of the good and casts someone out. As also it is perfectly possible to interpret the law as something always to be made flexible for the benefit of those who need reaching and bringing in to richer life, leaving the good to look after themselves and going after the lost sheep. But only one of these two is acting in obedience to the word in Hosea.

Was Jesus theologically irresponsible? He took responsibility to interpret his scriptures through the lens of God’s radical, nonviolent, merciful love. And for that, many accused him of being an irresponsible transgressor.

I’m hopeful that more Christians are following Jesus in interpreting the Bible through the lens of mercy, not sacrifice. Some will accuse us of being theologically irresponsible. And that’s okay. Mercy, not sacrifice, is a hard lesson to learn because so much of our world is constructed on sacrifice. The way of Jesus, as Paul said, is foolishness to many. But that foolishness, that irresponsibility, is an essential aspect of following Jesus.

June 12, 2015 A Tale of Two Pharaohs: On Horse Racing and Transformed Hearts
Recent Comments
4 Comments | Leave a Comment
"I'll politely disagree with you. It is not a fad but it is a label ..."
Patty Milazzo Toxic Christianity: 3 Things We Can ..."
"The head of state when and where Jesus lived was the Roman Emperor, and governance ..."
Michel Reflections on Indigenous Wisdom For Healing ..."
"The 2 most important book i have read on these issues is Andy Crouch's "Playing ..."
Patty Milazzo Toxic Christianity: 3 Things We Can ..."
"The toxins identified in this blog are self-righteousness in action. I welcome the call for ..."
Rod Bristol Toxic Christianity: 3 Things We Can ..."
Browse Our Archives
get the latest from
Teaching Nonviolent Atonement
Sign up for our newsletter
POPULAR AT PATHEOS Progressive Christian
1