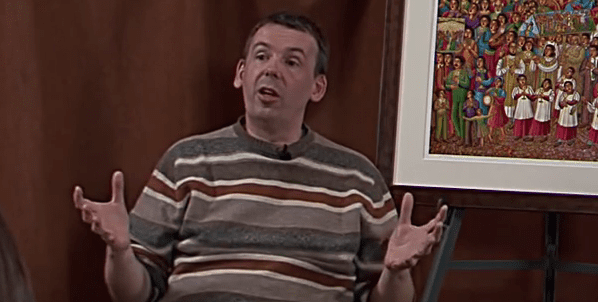 This article is part of my blog series inspired by Jesus the Forgiving Victim: Listening for the Unheard Voice by James Alison.*

James Alison’s title for his course of introduction to Christianity for adults is often met with confusion. More than once I have been asked which victim community we are speaking for, as if we are a new advocacy group they hadn’t heard of yet. When I explain that the title doesn’t refer to people as victims but to Jesus as our victim, that doesn’t clear things up very much! The worst reaction is from advocacy groups who think we want victims to forgive their perpetrators. This strikes them as insensitive in the extreme. I have been told that privileging forgiveness above the emotional and physical safety of victims only compounds their suffering. When I try to explain that we are not advocating for victims to forgive their perpetrators but for us to receive forgiveness from Jesus as his persecutors, well, again, nothing but blank stares and confusion.

Despite the fact that the grammar of the title is very precise – Jesus is the victim – it lands on our ears in exactly the opposite way. When we hear the word “victim” we make an immediate and unconscious connection to ourselves, not to Jesus. We know Jesus as many things – King, Savior, Son of God and Prince of Peace– but rarely if ever as a victim. Because of this we also mishear the word “forgiving”. Again, despite the language of the title that clearly has Jesus doing the forgiving, we conceive of forgiveness as something we do. We all know that good Christians forgive our enemies and pray for our persecutors. But James wants us to think about the reverse: that a good Christian is someone who has been forgiven by Jesus, our victim.

The thrust of James’ course, and what he hoped to make clear by the title, is that the God we worship is a victim of human violence. He was an utter and complete failure in human terms. Rather than achieve some sort of triumphant victory over the forces of evil, he occupied the place of defeat and shame, and was executed as a blasphemer and seditious enemy of the social order. Human beings, in the name of God and country, had him executed. His friends, for fear of meeting a similar fate, deserted him and went into hiding. Yet this beaten, betrayed and humiliated man returned in a spirit of mercy and peace. If we fail to see that, had we been there, we would have celebrated Jesus’ death or run away in fear, then we cannot partake of the new creation that Jesus inaugurated with his life, death and resurrection.

We could have called the course something like, “Jesus the victim of human violence who forgives us so that we can begin to build something new together” but that seemed a bit cumbersome. The course invites participants on a journey of working out what it means to worship a forgiving victim as our Lord and savior. Jesus the Forgiving Victim – I do think it says it all!

*Years ago, just when I was about to give up on Christianity as irrelevant to my life, I stumbled across the work of James Alison. He helped me encounter a God of mercy who loved me more than I could imagine – what a gift! So when he asked for help to produce his course of introduction to Christianity, Jesus the Forgiving Victim: Listening for the Unheard Voice, I jumped at the chance. All proceeds from sales of the course go to support the website, translations, promotion, and James’ living and travel expenses. James is an independent scholar and itinerant preacher and is very grateful for your support. James and I both pray that this blog series and the course itself will be a meaningful part of your journey toward a deeper faith and fuller life in Christ. You can learn more about the course and purchase it at our store.

For other parts of this series see:

Listening for the Unheard Voice

Authentically Boring: The Case for Praying by Rote

If Jesus is the Forgiving Victim, Then What Am I?

Trump, Biden, and the Search for Authenticity

July 17, 2015
The Iran Deal and American Self-Deception
Next Post