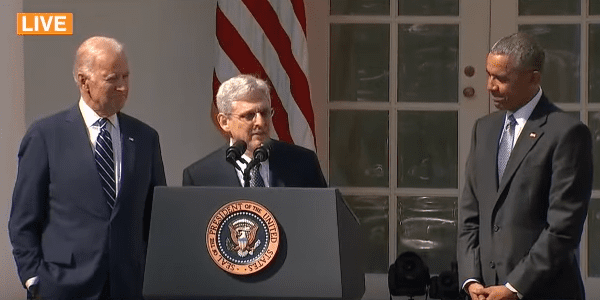 President Obama recently announced his nominee to fill the seat left vacant on the Supreme Court after the death of Antonin Scalia. By all accounts, Obama’s pick is a politically safe choice in a Republican controlled Senate. Merrick Garland is known as a moderate, so much of a moderate that many Progressives are criticizing him as, “an extraordinarily disappointing choice.”

I don’t know much about Garland, but I have no problem admitting that I think he’s adorable. I mean, after Obama introduced him as his nominee, Garland said this:

This is the greatest honor of my life, other than Lynn agreeing to marry me 28 years ago.

See. He said marrying his wife was the greatest honor of his life. That’s adorable. But his adorability factor only increased the more he talked!

As my parents taught me by both words and deeds, a life of public service is as much a gift to the person who serves as it is to those he is serving.

I know. Your heart is melting. Mine is too! And then he said this:

I know that my mother is watching this on television, and crying her eyes out. So are my sisters, who have supported me in every step I have ever taken. I only wish that my father were here to see this day.

Move over Pope Francis. I have a new crush.

Okay. Let’s get serious for a second. As a Progressive, I wish Obama would have risked nominating someone who would add more diversity to the Court. I agree with that criticism. But I also know that Obama is playing a political game. Whatever noble reasons Obama may have for picking Garland (like the fact that he’s adorable!) Obama is attempting to stick it to the Republican Senate one last time. He chose a moderate because it’s his chance to end his presidency defeating his rivals. If the Republicans pass Garland through, it’s a win for Obama. But if they don’t pass Garland, Obama will still win by claiming it as the capstone to his 8 year relationship with an obstructionist Republican Senate. Even when Obama bends over backwards to appease the Republicans, they obstruct him.

Indeed, soon after Scalia’s death, the Republicans began playing their game, vowing to stonewall any nominee that Obama presented. On the surface, Republicans have argued the same noble reasons as Senate Majority Leader Mitch McConnell – they want to wait until the next president is elected to allow “the people a voice in filling this vacancy.”

On the surface, it seems as though Obama and the Republicans are fighting over Constitutional policy. Obama states that he wants to fulfill his constitutional duty by nominating a Supreme Court Justice. But Republicans counter with their own constitutional justification that they have the right to reject whomever the president nominates.

But Republicans have taken policy beyond the Constitution by citing the precedent of two “rules.” First, the “Thurmond Rule,” named after the late Republican Senator Strom Thurmond. The “Thurmond Rule” claims that “the party not occupying the White House shall block any and all judicial nominees brought before the Senate during a presidential campaign season.”

As a Progressive, I want to shout all kinds of expletives at the so called “Thurmond Rule”!

But the Republicans have a secret weapon in this game for power. The second rule they employ is the Democratic version of the “Thurmond Rule.” The Republicans refer to it as the “Biden Rule,” which was put forth by then Democratic Senator Joe Biden. In 1992, Biden stated that, “President Bush should consider following the practice of the majority of his predecessors and not … name a nominee until after the November election is completed.”

These “rules” aren’t binding, of course. They aren’t in the Constitution. They are unwritten rules that each party has employed to obstruct the other party. And by referring to the “Biden Rule,” Republicans are invoking a brilliant political strategy in this game – their secret weapon is to turn the words of a high ranking member of the Obama White House against their own nominee.

Underneath the surface issue of following the Constitution or unwritten rules, the real issue is an imitative grasp for power. The irony is that each side claims the noble high ground of fighting for Democracy and the Constitution, yet each side plays by the same “rules” of obstruction when it fits their agenda to gain political prestige. As NBC political analyst Chuck Todd says, “Democrats have played this game [and] Republicans have played this game … If hypocrisy were water when it comes to judicial process, we’d all drown in Washington.”

The irony of political rivalry goes even deeper because as each side claims that their methods are noble and just, each side denies that they are simply playing the same hypocritical game, imitating one another in the grasp for power. It’s that aspect of imitative rivalry that makes each side look like the mirror image of the other.

There is no easy answer to our political rivalries, especially when our three branches of government are meant to check and balance one another. It’s a great system, but it also fosters this kind of political competition for power. Part of the answer to our political problems is to stop denying the reality that we play by the same “rules” meant to obstruct the other side. Admitting that is hard, because when we do, we acknowledge the uncomfortable truth that when it comes to our political rivals, our methods of grasping for power make us more similar than we’d like to admit.

Evangelicals, I've Got Some Questions For...
All Set Free
Related posts from Teaching Nonviolent Atonement