The Subversive Politics of Palm Sunday 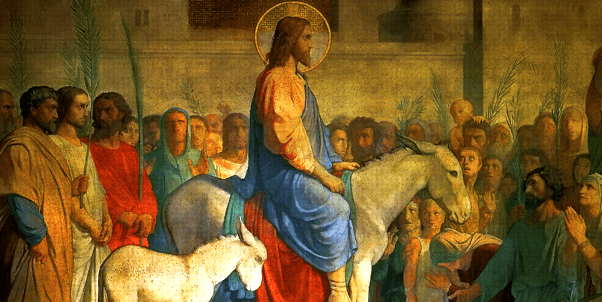 Make no mistake: the Gospel is political.

Politics refers to “the affairs of the city” and “influencing other people on a civic or individual level.”

Throughout his life, death, and resurrection, Jesus was political. He influenced people to live into the politics of the Kingdom of Heaven. For Jesus, Heaven is not essentially some place off in the distance where you go after you die. No, Heaven is a way of life to be lived right here, right now. We see this clearly in the prayer he taught his disciples:

Thy kingdom come, thy will be done on earth as it is in heaven.

When Jesus entered Jerusalem riding a colt on Palm Sunday, he was performing a political act of of subversion.

We’re so used to that word “Gospel,” that it’s lost its original meaning. But in those days, when the Roman empire went off and conquered another land in the name of their god Caesar, and killed all the men, raped all the women, and destroyed all the homes, the soldiers would come back parading through the land announcing “the Gospel according to Caesar,” the Good News of the latest victory of Caesar, that another land has been conquered for their god Caesar, and that Caesar’s enemies have been killed.

That’s the politics of Rome.

But that’s not the politics of Jesus.

On Palm Sunday, Jesus revealed an alternative way of being political. A political ruler’s entry into a city was of great importance in the ancient world. Roman rulers would enter a city on a powerful war horse to show their domination. Jesus rode on a colt – a young horse that had never seen war.

As Jesus rode the young horse, a large crowd spread their cloaks on the ground and waved their palm branches as they shouted “Blessed is the king who comes in the name of the Lord! Peace in heaven and glory in the highest heaven!” The Jewish Annotated New Testament states that the cloaks and branches were meant “to connect Jesus to the kingship of Israel.” The term “Son of David” was also a clear messianic reference that hoped for a new political ruler, but just what kind of king was Jesus?

When Jesus rode into Jerusalem on Palm Sunday, he was revealing that the reign of God is in stark contrast to the reign of Rome and every other political system that seeks triumphant victory by influencing people through violence and coercion.

The Gospel of Jesus subverts the politics of violence because the Gospels is the politics of humility, service, forgiveness, and a nonviolent love that embraces all people, but especially those we call our enemies.

Fortunately, Jesus revealed the alternative. He called it “The Kingdom of God.” It’s a political way of life based not on triumphant violence, but rather humble service. The politics of Jesus makes sure everyone has daily bread, it seeks to forgive debts and sins, it avoids the temptation to commit evil against our neighbors, and it calls us into a life of forgiveness.

But this is risky. We know that the politics of Jesus led him to Good Friday, where he suffered and died. And yet he stayed true to the Kingdom of God, speaking words of forgiveness even as he was murdered, “Father, forgive them for they know not what they do.”

The Kingdom of God is not just a call to a personal ethic; it’s a political ethic. Indeed, the politics of Jesus seeks to influence our personal lives, but it also seeks to influence our political lives. Wherever personal or political systems use violence, power, and coercion to be triumphant and victorious, Jesus beckons us to follow him into a different kind of politics – into the Kingdom of God that lives and dies by love, service, and forgiveness.

March 21, 2016 Victory Over Death
Recent Comments
0 | Leave a Comment
"Not going to happen until Christ returns."
Bob Shiloh How Forgiveness Can Transform Our Violence ..."
"MyNulled.in - Latest Premium Wordpress Themes, Wordpress Theme Nulled, Download Wordpress Theme Nulled, Download Latest ..."
Mynulled Children, Creation and Incarnation: The Neverending ..."
"Which leaves many in a quandary doesn't it. What to believe about a book that ..."
Bob Shiloh Why You Should Run from “Bible ..."
"agree"
barbara fulcher Why You Should Run from “Bible ..."
Browse Our Archives
Related posts from Teaching Nonviolent Atonement