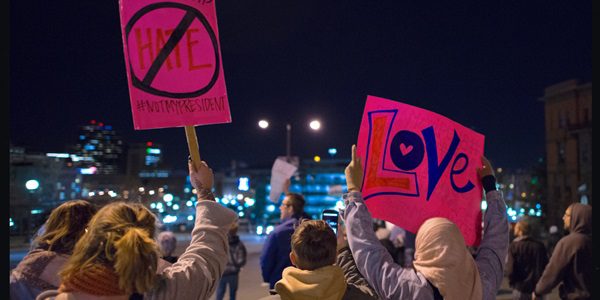 President Elect Donald Trump. It will take a long time for that to sink in. So, where do we go from here?

We are being called to heal our nation and unite. The United States is clearly divided, but I’m suspicious about those calls. After 9/11, we knew that our nation needed to heal. But we never healed from the wounds of 9/11. No one taught us how to heal. So instead of healing, we acted out our pain through acts of revenge. And we’ve been seeking vengeance ever since, inflicting terror in the Middle East in the tragically ironic “War on Terror.”

How to Heal – Holy Protest

If you are like me and feeling a deep sense of pain by the result of Tuesday’s election, acting out that pain with violence is understandable. After all, it’s what we did after 9/11.

But if you do that, you are unlikely to heal. Many in my hometown of Portland, Oregon, have taken to the streets to protest president elect Donald Trump. I appreciate those protests, especially since Trump lost the popular vote. Tragically, a few rioters have acted violently, causing more than $1 million in damage to local businesses. This violence isn’t holy. It hurts others and only scratches at our wounds. It never leads to healing.

The way to healing our pain is not through violence, but through expressing our pain. Many people have taken to Facebook to lament. That’s good. But an even better way to heal is to talk about our pain, disappointment, and anger with a trusted friend, pastor, or therapist.

There’s a book in the Bible called the Psalms. It expresses all kinds of raw emotions – anger, resentment, hatred, lament, and bitterness. Why? Because the psalmist knew that burying those emotions doesn’t lead to healing. Denying that we have those emotions doesn’t help, either. The only way to heal is to go through those emotions by talking them out with someone we trust – someone who will receive our emotions with compassion. When we talk out our emotions, we are less likely to act them out by channeling our violence upon another.

The Psalms are public displays of holy protests. Like the prophets, the Psalms look at the political violence, oppression, and divisiveness in the world and protest against them. The Psalms are holy protests because they claim that there’s something deeply wrong in the world. It’s important that we protest publicly, too, otherwise we become numb and cynical. We begin to think that this is just how the world is.

The flip side of talking is listening. Progressives, like myself, often come to the Psalms with a sense of judgment. We wonder, “How could the Psalms be so angry, even express desires for violence?” Well, I think we can now empathize with the psalmist. Part of the importance of empathy is that it creates the ability to listen with a non-judgmental spirit. Empathy receives what others have to say and normalizes the human emotions. “Oh, you are angry and resentful? And part of you wants to act out in violence against your enemies? Yep, that’s human. It’s normal. Tell me more about…”

The more we talk about our pain and disappointment with someone who can receive it with compassion, the less power it has over us and the more energy we can spend making the world a better place.

A Call to False Unity

Since early on Wednesday morning, Donald Trump, Hillary Clinton, Barack Obama, and other politicians have called us to unite behind our president elect. Isn’t that great? A call to bipartisan unity. No, it’s not great.

If president Trump is like candidate Trump and channels hatred against minority groups, that is not okay. Part of healing as a nation is to protest by naming that fact.

Unity is a strange thing. We usually think unity is good, but Trump actually ran his campaign on creating unity. He wanted his supporters, largely white people, to unite against minority groups – Latinos, Muslims, African Americans, LGBTQ, women, and the disabled. That’s the kind of unity that candidate Trump called us to. And many of his supporters have united behind his violent rhetoric. Lilly Workneh, Black Voices Senior Editor at the Huffington Post, writes,

Since Tuesday, people from all types of communities – black, Latino, Muslim, Jewish, Asian, queer people, women – have been physically harmed, slandered with hate speech or been the targets of racist graffiti.

So, do not call me to unite behind Donald Trump. I will resist his policies for as long as he seeks to channel cultural hatred against his chosen scapegoats.

President elect Trump has a long way to go before he can earn our trust. Maybe some of my friends are right. Maybe candidate Trump lied throughout his campaign because he thought it was the only way he could be elected. Maybe he totally fooled his supporters and his detractors. Maybe he will stop the 3:30 am tweets of revenge. Maybe he will be a president of reconciliation. If so, it’s imperative that he tells his supporters who are acting out violent racism to stop. It will be difficult for him to do that, since candidate Trump normalized such racism.

Beyond Shame and Classism

But I’m hopeful that most Trump supporters didn’t vote for him because of racist motivations. They voted for him because they feel a deep sense of shame that he tapped into. There is classism in the United States and, unfortunately, Hillary Clinton was the poster child of that classism.

Bernie Sanders tapped into that sense of shame and sought to heal it in a much more productive way than Trump’s method of scapegoating. Bernie named the truth that we don’t live in a meritocracy. The American Dream, where anyone can simply work hard and get ahead, doesn’t exist. It never did. And many who voted for Trump know it because they live it every day. The Left would do well to take Sanders as a model moving forward. As progressive Rabbi Michael Lerner recently wrote in the New York Times,

Democrats need to become as conscious and articulate about the suffering caused by classism as we are about other forms of suffering. We need to reach out to Trump voters in a spirit of empathy and contrition. Only then can we help working people understand that they do not live in a meritocracy, that their intuition that the system is rigged is correct (but it is not by those whom they had been taught to blame) and that their pain and rage is legitimate.

But Trump also has work to do. If he seeks to affect economic change that will address the classism within our country, I’ll unite behind those policy changes. But I don’t trust him. He has a life-long pattern of justifying revenge and scapegoating. Trump is a human being, of course. He’s not evil. There is goodness within him and he needs that goodness reflected back to him. But make no mistake, his rhetoric and the scapegoating policies that he promised during his campaign were divisive and in no way lead to the unity so many of us want. We must continue with public displays of holy protest because true unity is radically different from Trump’s campaign promises. It will come only when we stand united for a world where there are no scapegoats.

November 11, 2016
Honoring Soldiers in a World Desperate for Peace
Next Post