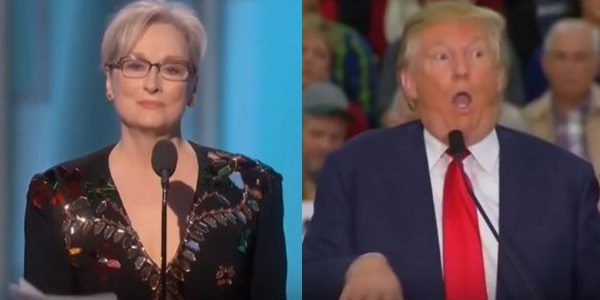 Meryl Streep put the culture war in full view Sunday night at the Golden Globes. She stated in her acceptance speech for the Lifetime Achievement Award,

Thank you Hollywood foreign press … You, and all of us in this room, really, belong to the most vilified segments in American society right now. Think about it. Hollywood, foreigners, and the press.

Streep then discussed Donald Trump’s infamous imitation of a disabled reporter. During his campaign, Trump blatantly mocked the reporter, who has a condition called arthrogryposis. Streep rightly claimed Trump’s position of power has the ability to influence others. “Disrespect invites disrespect,” she said. “Violence incites violence. When the powerful use their position to bully others, we all lose.”

Streep’s comments have merit, but they might not be helpful in the age of Trump.

It’s interesting that in the culture war everyone claims to be a victim. Meryl Streep is not a victim, yet she claims to be in “one of the most vilified segments in American society right now.”

That’s interesting because people on the other side of the culture war make the same claim to being vilified. Frankly, it’s hard to argue with them. Do you remember Hillary Clinton’s comment about the “deplorables”? Well, the “deplorables” took on a victim status. They felt disrespected, so they responded to Clinton in disrespectful ways. Why? Because Meryl Streep is exactly right. Disrespect invites disrespect.

For all of his claims to be a “winner,” Trump knows the paradox of the modern world better than anyone in the public sphere. He knows that the greatest position of power is found with the victim.

The anthropologist René Girard explains this phenomenon. He states that the claim to be a victim is unique to the modern world. In no other period in human history have we seen this competition to be the greatest victim. Girard writes in his book I See Satan Fall Like Lightning, “The concern for victims has become a paradoxical competition of mimetic rivalries, of opponents continually trying to outbid one another.”

Each side makes the same claim to being a victim. It’s what Girard calls “mimetic doubling.” The term “mimetic” comes from the Greek word “mimesis” which means “imitation.” But for Girard, mimesis refers to a non-conscious form of imitation. It’s “non-conscious” because we don’t realize that we are imitating the other. Mimesis is why “disrespect invites disrespect” and why “violence incites violence.” Streep and Trump would never admit to imitating one another, but that’s exactly what they do when they each claim to be victims.

As if to prove Girard right, Trump took to Twitter following Streep’s remarks.

Meryl Streep, one of the most over-rated actresses in Hollywood, doesn’t know me but attacked last night at the Golden Globes. She is a Hillary flunky who lost big. For the 100th time, I never “mocked” a disabled reporter (would never do that) but simply showed him “groveling” when he totally changed a 16 year old story that he had written in order to make me look bad. Just more very dishonest media!

Who Wins a Culture War?

Who wins a culture war? Nobody. We all lose. And unfortunately, the real victims will not be Donald Trump or Hollywood. They will be those on the margins. Streep is right that foreigners, those with disabilities, and the press could very well be victims in Trump’s America. And she’s right that people with great influence need to take responsibility. In typical bully fashion, Trump mocked a disabled man and then justified his actions. We need to demand better from our leaders. And the press could be sidelined in a Trump presidency. We need to be vigilant about protecting the rights of foreigners, the disabled, and the freedom of the press. But Meryl Streep and Hollywood are going to be just fine. They’ll keep making movies and we’ll keep watching them.

Ultimately, Streep’s claim to being a victim is a distraction from the real victims of America’s culture war.

January 5, 2017
What's Up with Jesus and John the Baptist?
Next Post

January 11, 2017 Bible Matters: The Prophet Hosea: Sex, Love, and Politics
Recent Comments
0 | Leave a Comment
"According to Websters definition is disaster etc as we thought fiery gloom, end of the ..."
Lori Edgar Surprise! Apocalypse Does Not Mean What ..."
"Very nice blog thank youhttps://www.ruempel-chris.a...https://www.ruempel-chris.at"
Christopher Soos The Theology of a Biker Gang
"Van Jones put it out there on his response to the declaration of the election. ..."
jekylldoc Toxic Christianity: 3 Things We Can ..."
"See Brene Brown. Leading with heart requires accepting vulnerability."
jekylldoc Toxic Christianity: 3 Things We Can ..."
Browse Our Archives
get the latest from
Progressive Christian
Sign up for our newsletter
POPULAR AT PATHEOS Progressive Christian
1

QAnon is a hoax designed for...
slacktivist
Related posts from Teaching Nonviolent Atonement