What’s Up with Jesus and John the Baptist?

What’s Up with Jesus and John the Baptist? January 5, 2017 Adam Ericksen 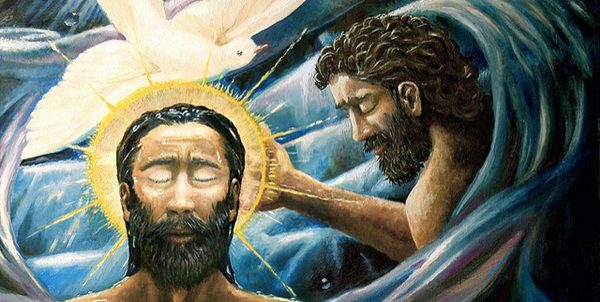 There are a lot of questions surrounding his baptism. For example, what’s up with Jesus and John?

In Matthew’s Gospel, John says to Jesus just before the baptism, “I need to be baptized by you, and do you come to me?” John recognizes that Jesus is more powerful, so Jesus should baptize him. But, Jesus insists that John baptize him, “for it is proper for us in this way to fulfill all righteousness.”

How did Jesus’ baptism “fulfill all righteousness”? The text is enigmatic, but we will find answers if we look at Jesus’ ministry as a whole.

After Jesus’ baptism, the Spirit led him into the desert to be tempted. The devil tempted him with power and prestige. We usually think that Jesus was first tempted in the desert.  But Jesus was tempted before the desert. He was tempted at his baptism.

John was humble when he asked Jesus to baptize him. But it was a humility that sought to elevate Jesus to a position of power over John. He told people, “I baptize you with water; but one who is more powerful than I is coming … His winnowing fork is in his hand, to clear the threshing floor and to gather the wheat into his granary; but the chaff he will burn with unquenchable fire.”

There are many interpretations of John’s statement. But if he thought Jesus’ “power” was associated with violence, he was sorely mistaken. Jesus resisted that kind of power and rivalry throughout his life. Jesus came to serve, not to be elevated above anyone.

Jesus’ baptism fulfilled “all righteousness” because it showed that the Son of God knew he was dependent upon others. He needed John. Not even the Son of God could live independently from his fellow human beings. He, like all of us, was inter-dependent.

At his baptism, Jesus modeled what this open acknowledgment of inter-dividuality looks like. And in doing so, he fulfilled all righteousness.

Image: Flickr, Waiting on the Word, Baptism of Christ 10. Creative Commons License, some changes made.

January 4, 2017
Wednesday Sermon: Get Up and Embrace the Future Unafraid!
Next Post