Wednesday Sermon: Get Up and Embrace the Future Unafraid!

Wednesday Sermon: Get Up and Embrace the Future Unafraid! January 4, 2017 Tom Truby 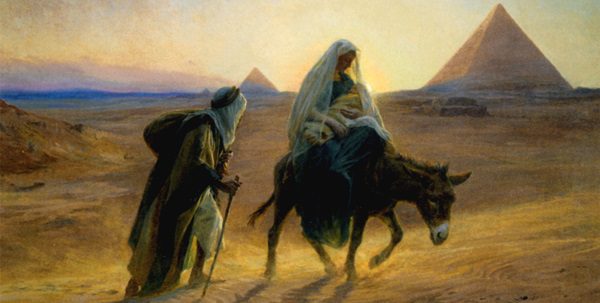 In this sermon, Tom discusses the difference between the violence of Herod and the nonviolent love of God who works for justice. As Tom states, “All of this suggests God is on the side of the poor and the vulnerable, those who are crushed under the thumb of the powerful and the cruel.  Even when it is the darkest, God, through the God-infused human spirit, secretly acts to subvert all that is oppressive.”

Get Up and Embrace the Future Unafraid!

“When the magi had departed, an angel from the Lord appeared to Joseph in a dream and said, ‘Get up. Take the child and his mother and escape to Egypt.’”

A week ago, on Christmas Day as we gathered with families and friends, the airwaves were melodic with music of love and peace and smells of tradition-infused food filled our hearts with gladness.  But a week has gone by now, we are in the New Year and the magi have departed.  We know changes are coming, that in some ways things will be different in the New Year and we will inevitably be surprised and perhaps disappointed. We wait, prepared to move in response to the new, but unclear on what direction we should go. Perhaps we are in Joseph’s place just before the angel appeared in a dream.

“’Take the child and his mother and escape to Egypt! Stay there until I tell you, for Herod will soon search for the child in order to kill him.” We know the story well. We see the cruelty of the world condensed in it; how those caught in the crossfire of history suffer though they are innocent. As we speak, refugees are pouring out of the Middle East and Africa headed for Europe and America if they could.  How many times have we seen “Rachel weeping for her children and she did not want to be comforted, because they were no more?” Rachel weeps in Syria, Afghanistan, Nigeria, Chicago, anywhere and at any time in our violence-prone world.  Those of us with children and grandchildren with skin of a darker tone know they are at greater risk than our lighter skinned children and grandchildren though none are immune.

The angel knows how empire reacts to authority challenged and so Joseph and family must flee.  “Joseph got up and, during the night, took the child and his mother to Egypt.” How many Josephs do we have in the world getting up in the middle of the night and attempting to escape their homeland with their families? Perhaps they are escaping Honduras, or Aleppo, or an abusive father, or a violent neighborhood. When they get to us, could it be we are hosting Joseph and his family?

With Joseph and the child with his mother safely in Egypt, the story returns to Bethlehem where we discover King Herod’s response to being tricked by the magi.  We don’t know which weighs heavier for him; his rage at being tricked or his fear of a possible future political rival. My reading of the text weights it toward being tricked; for the magi exposed that he was not as all-knowing as he would like to think. We see the depth of his rage in the ferocity of his response. “He sent soldiers to kill all the children in Bethlehem and in all the surrounding territory who were two years old and younger.”

Put yourself in the place of those soldiers for a moment. What would you have to do to your own humanity to fulfill your duty if you were the one who must slaughter the innocent? Having done this, how would these soldiers regain their humanity when they returned to civilian life? More than the infant dies when the soldier kills.

Matthew’s counter-story to empire again connects what happened in Bethlehem to a deeper story meant to address human vulnerability and human proclivity to participate in horrors like this. He said “This fulfilled the word spoken through Jeremiah the prophet:

A voice was heard in Ramah, weeping and much grieving.  Rachel weeping for her children, and she did not want to be comforted, because they were no more.”

The scripture forces us to see things we would prefer not to see hoping we will see ourselves more clearly.  At the same time scripture points toward Jesus as a way out of our mess.

In Matthew, Jesus is the new and more powerful non-violent Moses.  Moses’ birth was also contested and empire his enemy.  At the time of Moses’ birth the Hebrew women were to abandon their male babies lest the birth of more little boys, who could grow into warriors, threaten the king.  Many of you know the story. Moses’ mother puts baby Moses into a water tight basket and floats him on the Nile River as a way of hiding him from empire.  The daughter of the king hears the child crying and adopts him into the royal family. She even brings along a wet nurse for the child who happens to be the child’s mother. So it is that in a plan that takes years to unfold, the cruel Egyptian emperor is subverted and Moses leads his people out of bandage, the same task Jesus is born to fulfill.

In Matthew the new Moses miraculously escapes death at the hands of empire by going to Egypt.  Being in Egypt, he is set to come out of Egypt and save all people just like Moses saved the Hebrews.

All of this suggests God is on the side of the poor and the vulnerable, those who are crushed under the thumb of the powerful and the cruel.  Even when it is the darkest, God, through the God-infused human spirit, secretly acts to subvert all that is oppressive.

“He (Joseph, now in Egypt) stayed there until Herod died. This fulfilled what the Lord had spoken through the prophet: I have called my son out of Egypt.” Out of the depth of vulnerability and bondage God calls his Son.  Matthew wants us to know there is a pattern here.  This event in history is part of a redemptive plan that spans centuries and has now reached its culmination in Jesus.

“After King Herod died, an angel from the Lord appeared in a dream to Joseph in Egypt. ‘Get up,’ the angel said, and take the child and his mother and go to the land of Israel. Those who were trying to kill the child are dead.’” I love the phrase “get up”; take action, get a move on, get going, it’s time to go forward in a new way.

“Joseph got up, took the child and his mother, and went to the land of Israel.  But when he heard that Archelaus ruled over Judea in place of his father Herod, Joseph was afraid to go there.” Joseph wasn’t entering into utopia.  There was still reason to be afraid, discrete and cautious.  The child and his mother were still at risk.  Empire still held sway and so Joseph avoided Bethlehem.

The dream angel confirmed his fear and directed him to go to the area of Galilee.  Galilee, a poor area, separated from Judea by the foreign people of Samaria, would be where he grew up.  So it was that Joseph “settled in a city called Nazareth so that what was spoken through the prophets might be fulfilled:  He will be called a Nazarene.”

We end with Joseph and the Holy Family beginning anew in Nazareth.  We too are beginning anew; a new year, a new political administration, new clarity on the message we are called to give witness to.  And like Joseph and his family, we are not alone.  We journey forth with each other and with the Spirit from God telling us we are non-violently loved and that we can non-violently love wherever we are.

We know we are part of the biggest movement in history that, in the end, will show love as the driver and maintainer of the whole universe.  In view of this, its time for us to “Get up” and get going;  to leave our past in Egypt and embrace our future unafraid.  We are unafraid because our future has Jesus, our Lord, as its center.  Amen.

Image: Flickr, Waiting for the Word, Flight to Egypt 20, Creative Commons License, some changes made.

January 5, 2017 What's Up with Jesus and John the Baptist?
Recent Comments
0 | Leave a Comment
"According to Websters definition is disaster etc as we thought fiery gloom, end of the ..."
Lori Edgar Surprise! Apocalypse Does Not Mean What ..."
"Very nice blog thank youhttps://www.ruempel-chris.a...https://www.ruempel-chris.at"
Christopher Soos The Theology of a Biker Gang
"Van Jones put it out there on his response to the declaration of the election. ..."
jekylldoc Toxic Christianity: 3 Things We Can ..."
"See Brene Brown. Leading with heart requires accepting vulnerability."
jekylldoc Toxic Christianity: 3 Things We Can ..."
Browse Our Archives
get the latest from
Progressive Christian
Sign up for our newsletter
POPULAR AT PATHEOS Progressive Christian
1