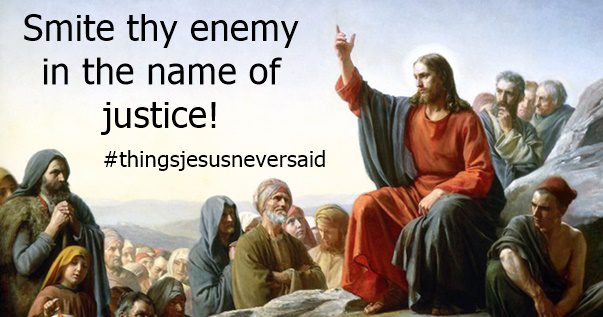 Some people claim that Jesus didn’t advocate for justice. They have a point if you think that justice and retribution are necessarily connected. But they are not. Jesus transforms our understanding of justice, not by connecting it with retribution, but with forgiveness.

Jesus taught his disciples to forgive not just 7 times, but 77 times. Obviously, forgiveness isn’t about counting up to 77 times and then quitting. Seven is the symbolic number for completeness in the Hebrew Bible. Using 77 as a hyperbole, Jesus said we should never stop forgiving.

But does that mean Jesus didn’t advocate for justice? Are justice and forgiveness opposed to one another?

No. Jesus opposed retributive justice. The justice system in the United States is based on punishment. It’s primarily a form of retributive justice. The same was true in ancient Rome. If you committed an act that was against the “justice of Rome,” you would not be forgiven; you’d be killed. If you commit an act that’s against the “justice of the United States,” you will be punished and possibly killed.

Jesus turned that idea of justice upside down. He enacted restorative justice. It’s a justice that isn’t based on retribution. Rather, it’s based on healing our souls and our relationships.

What would that healing look like? On an individual level, it might look the Restorative Justice Community Court in Chicago, in which victims and perpetrators come together in a safe and respectful environment, listen to each other without demonization or condemnation, and agree upon what must be done to repair the damage from a crime. Once the defendant makes restitution, there is no record kept of wrong-doings. “Justice” is transformed from a system of punishment, which often exacerbates and perpetuates pain, to a system of reconciliation that sends ripples of positive change through the community.

On a broader societal level, such healing looks like a willingness to learn the depths of our own brokenness, knowing we are safe in the shelter of God’s love. Anchored in the forgiveness we have received, we are willing to take a long, sober look at all the ways we are complicit in harm, listen to those who have been marginalized, and, with God’s help, untangle ourselves from the matrix of violence and light the way out for others to follow. We replace systems of oppression and hierarchy with systems of cooperation and community. And we start within ourselves, by ceasing to identify ourselves against others, but finding our wholeness in our interconnection to every human being. This is how we turn ourselves away from the cycles of violence that disguise themselves as justice and reorient ourselves toward the justice of God.

God’s justice seeks to set the world right through acts of mercy, grace, and love. God’s justice doesn’t seek violent retribution, but it does confront the “powers and principalities” that promote the systemic evils of inequality, sexism, militarism, transgenderism, racism, consumerism, etc.

Image: Wikimedia, Bloch, Sermon on the Mount, Public Domain, some changes made.

To Those Christians Who Say, "God...
The Official Blog of Benjamin L. Corey
Related posts from Teaching Nonviolent Atonement