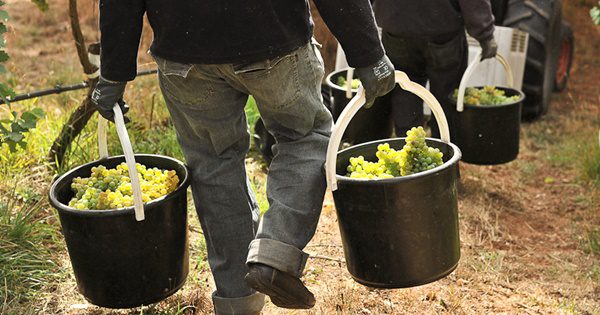 God allows them to kill his son, with the son’s full agreement, and then forgives them as a way of showing the world his character, his love and how different he is from what they think.
-Rev. Tom Truby

As we pick up on this morning’s gospel lection, Jesus continues speaking in the temple.  He asks his audience, the chief priests and elders, the religious leaders in his culture, to listen to another story.

Now suppose you had a passion for good wine and wanted to create it on your own land, what would you do? You would plant a vineyard of the best grapes, put a fence around it to keep wandering deer and people out of it, install stainless steel equipment to press the grapes when they are at just the right sugar content and then you would put a watchtower and lights in the middle of your vineyard with several cameras focused in different directions and someone sitting in a room watching the feed 24 hours a day, right?

Of course you would need staff to run your winery: prune the grapes, cultivate them, make sure the irrigation system works during the hot summer, watch for insect infestation and finally pick them at the right time in the fall; so you would lease your vineyard to tenants.  And oh, I forgot to tell you, you have to be gone most of the time because you are a very famous movie producer.  You have a movie to direct that will be filmed in Thailand and after that you plan to go to Australia to write your memoir.

When harvest time came, it was the first big harvest for these grapes after several years of waiting and after making a huge initial investment; you sent several of your most trusted employees to collect your share of the grapes to be run through the presses you had provided. The tenants seized your employees, beat one up, killed another and throw stones at the third driving him off. The survivors returned and reported the whole thing to the landowner (I am switching out of the first person singular now that you are into the story).  This really happened.  It wasn’t fake news.

The landowner, a model of patience and self-control, must have thought there had been a misunderstanding.  Maybe they thought the three he had sent were actually thieves and they were protecting the landowner’s investment? The landowner sends a larger delegation this time with clear certification of their authority but the same thing happens.

Notice that the violence in each of these cases emanates from the tenants. The landowner has no beef with them.  He just wants the agreed upon share but something seems to have happened to the hearts of the tenants.  They were happy when they entered the contract but now they seem closed to the landowner and maybe even jealous of him.  It’s like they want to be him rather than the graced recipients of his benevolence.

The tenants do not want to honor their agreement nor acknowledge what is rightfully the landowner’s even though he approaches them in peace.  There is no coercion in his method of collecting his fair share.  He has assumed they will see it as he does and he comes toward them through his employees with openness and trust.  He will try one more time.

“Finally he sent his son to them, saying, ‘They will respect my son.’” I wonder if this story traces Jesus’ own thought journey as he gradually came to realize that the people are going to reject him and he will have to die to communicate.  When he first started his ministry he still hoped people would believe him, turn toward God and avert the disaster he saw coming.  But they didn’t turn.  He underestimated their resistance. Is he like the landowner who, even after they had beaten and killed his cherished employees still thinks they will respect the landowners son out of respect for the landowner?

“But when the tenants saw the son, they said to themselves, ‘This is the heir; come, let us kill him and get his inheritance.’” Yes, they were in rivalry with the landowner.  They did want to be him! With the coming of his son they thought they saw an opportunity to take what was his.  Something had happened deep in their hearts.  They had become a people willing to commit murder, even the murder of the landowners son, to become sole owner of the vineyard.

“So they seized him, threw him out of the vineyard, and killed him.” Do you see where this is going? It won’t be long till the temple police seize Jesus in the Garden of Gethsemane. We are near the end of Matthew and very close to the crucifixion. And where is Jesus killed, in Jerusalem? No, they threw him out and he dies outside the city.

The vineyard, so carefully cared for and invested in, turns out to be the human race and the beautiful and tragic world we inhabit, turns out to be the world we have been tasked with taking care of.  We are the tenants hired to run the place while the landowner was away. Had we done our job we would be living in peace. But we weren’t satisfied, we wanted to be the landowner, we each wanted that for ourselves and so we destroyed our peace with God and continually battle with each other. The losers grow resentful and the winners become self-satisfied as chaos and violence descends.

Now we come to the punchline of Jesus’ story and it takes the form of a question. “Now when the owner of the vineyard comes, what will he do to those tenants? They said to him, ‘He will put those wretches to a miserable death, and lease the vineyard to other tenants who will give him the produce at the harvest time.’”

At this point they don’t realize they are condemning themselves.  They are still thinking they are the dependable employees sent out to collect the vineyard produce. If they were in this situation they would put those evil tenants to a miserable death and select other tenants from then on. We know they are about to give Jesus a miserable death for claiming he is the son of God. We also know that God, by contrast, doesn’t visit a miserable death on them even though they are the ones who rival him. Instead he allows them to kill his son, with the son’s full agreement, and then forgives them as a way of showing the world his character, his love and how different he is from what they think.

The story is a set up to get them to see themselves and God in a new way.  “Jesus said to them, ‘Have you never read in the scriptures: “The stone that the builders rejected has become the cornerstone; this was the Lord’s doing, and it was amazing in their eyes”?”

At this point some of them must have begun realizing he is talking about himself.  He is the son the tenants killed in the story.  Now he is using their own scripture to suggest their killing him is part of God’s plan, the method by which his centrality to human salvation is shown, and it is all amazing. God has a plan that outflanks them all and Jesus, the one who stands before them, is key to it.

Does this apply to the church of our time? Could it be that the churches, both those on the left and those on the right, by refusing to come out clearly against violence have excluded themselves from the kingdom of God? Will God find other tenants more willing to produce the fruits of the kingdom and if he does, will we be among them?

There is one other thing the new tenants gradually come to know: that their old identity is no longer valid and they have been given a new one.  The excluded stone that reveals the scapegoating mechanism breaks to pieces identities built on exclusion. These old identities become impossible to maintain as we gradually come to see the only identity we need has been given us already. We are brothers to Jesus and blessed children of God and that’s enough, anything more is a burden; or rubbish to use Paul’s word.

Jesus, the excluded stone that reveals the scapegoating mechanism, smashes all identities it falls on because it has the weight of absolute truth. Under its weight all mythic self-structures built on supposed superiority or imagined inferiority disintegrates. All are children of God and brothers and sisters to Christ.

This is what Paul was trying to communicate in the epistle lesson from Philippians where he said:

Yet whatever gains I had, these I have come to regard as loss because of Christ.  More than that, I regard everything as loss because of the surpassing value of knowing Christ Jesus my Lord (Jesus is now the center of Paul’s identity rather than himself and his supposed achievements).  For his sake I have suffered the loss of all things, and I regard them as rubbish, in order that I may gain Christ and be found in him, not having a righteousness of my own that comes from the law, but one that comes through faith in Christ, the righteousness from God based on faith. (Philippians 3:7-9, NRSV)

As we acknowledge our own complicity in sin; in our being among those who almost habitually persecute others, often in ways we don’t recognize, in acknowledging that while knowing we are forgiven, we gain a new identity and become the new tenants capable of producing fruit. Thanks be to God.

October 9, 2017
Mike Pence Is a Devout Christian, but He’s Not Following Christ
Next Post

Things Christians Think and Do Not...
Honest to God
Related posts from Teaching Nonviolent Atonement