Mike Pence Is a Devout Christian, but He’s Not Following Christ 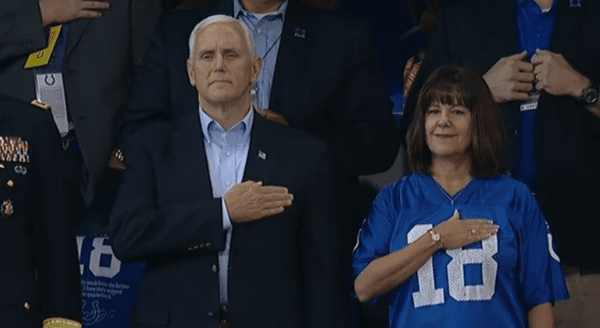 Mike Pence is a Christian. In fact, when he accepted the nomination to run as Vice President, he claimed to be “a Christian, a conservative, and a Republican, in that order.”

Unfortunately, yesterday Vice President Pence failed to be first and foremost a Christian while attending an NFL game. He showed he is not a follower of Christ, but rather he’s a follower of Donald Trump.

Pence attended the Colts versus 49ers game in Indianapolis. President Trump boasted that he ordered Pence to leave if any players protested at the game. Trump tweeted,

“I asked @VP Pence to leave stadium if any players kneeled, disrespecting our country. I am proud of him and @SecondLady Karen.”

As many have stated, this was a political stunt. Pence and Trump both knew that players would protest. NFL players have protested all season, and the 49ers are on the forefront of the protests.

There was no doubt that players would protest. Pence is rightfully being criticized for wasting tax payer dollars on this political stunt. But I think there’s another issue here. Mike Pence is utterly failing at following Jesus.

Pence says he is first and foremost a Christian, but his actions do not resemble Christ. And I refuse to allow him to control the narrative of Christianity.

Mike Pence’s actions during the football game were textbook case of oppression. It had nothing to do with the love and justice Jesus calls his followers to strive for.

Jesus warned his followers that, “Not everyone who says to me, ‘Lord, Lord,’ will enter the kingdom of heaven, but only the one who does the will of my Father in heaven.”

This warning isn’t just for Mike Pence. It’s for all of us who claim to be followers of Christ. After all, do we follow the will of the Father? We might say, “Lord, Lord,” but do we act like Jesus is Lord?

Or do we follow the will of a president? Do we act like the flag of the United States is our Lord? I’m afraid that Pence needs to get his Christian loyalties straightened out. And he would do well to start by following the ninth Commandment and stop bearing false witness against his neighbors.

Pence and Trump are trying to convince us of a lie as they bear false witness against NFL players. That lie is that the NFL players are disrespecting the flag. This accusation is completely false from the players perspective. They aren’t protesting to disrespect the flag. Quite the contrary, they are protesting because they believe in the ideals that the flag represents.

The flag represents freedom and justice for all. But many who have political and social power are leading us toward oppression. Pence’s actions at the game were a textbook case of oppression.

The protest is primarily about abusive and oppressive police practices and a criminal justice system that discriminates against people of color, but the Trump administration wants to change the narrative in order to demonize the protesters as anti-American.

But the NFL players are not anti-American. In fact, they so fervently believe in American ideals that they are willing to take a knee for them. In taking a knee, they speak for all of those who suffer from the racist structures of injustice and oppression in the United States.

The Trump administration is uncomfortable with the truth about racism, so they attempt to change the narrative. In doing so, they completely miss the point of the protests. If they really wanted the unity they so often speak about, they would listen to the protests and work for an end to racial injustice.

As a devout Christian, Pence knows that the Bible has a word for that: Idolatry. Pence has placed the American flag above the American people. As a Christian, Pence knows that Jesus didn’t say that you should love your flag or even your nation. He said you should love your neighbor as yourself. That is the will of the Father. In order to love his black neighbors, Pence needs to listen to their protests and work for justice on their behalf.

That would be the Christian, and the American, thing to do.