Sermon: The One Given the Least 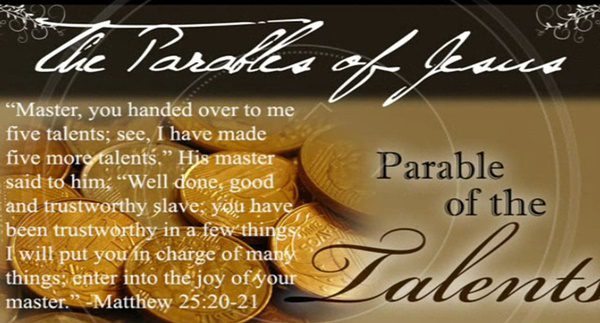 We divide ourselves between those in the kingdom and those out of it by how we respond to those thrown into the outer darkness.

Reverend Tom Truby shows that mimetic theory is a powerful tool that enables pastors to preach the Gospel in a way that is meaningful and refreshing to the modern world. Each week, Teaching Nonviolent Atonement will highlight his sermons as examples of preaching the Gospel through mimetic theory.
Read more at http://www.patheos.com/blogs/teachingnonviolentatonement/2017/11/sermon-extra-oil-wait/#BDzAclZB0TIQp8mj.99

The One Given the Least

I grew up on a farm in Nebraska and from an early age identified with what we called “the plight of the farmer.”  Even then economic forces against small farmers were building. Farmers forced off the land or forced to work for absentee landlords felt like failures when compared with their fathers before them. In this experimental sermon I picture Jesus preaching to the farmers I knew and grew up with, my father among them.

Imagine yourself a farmer listening to Jesus’ story.  The government, through high taxes and through the finance people has forced you to lose your ancestral land so now you work for others.  Every time you try to do anything about this the Roman military comes out against you.  Those in power say it’s the way the system works now.  There has to be winners and losers and you are the loser because you didn’t play the game very well.  It’s your fault. Accept it, embrace it, know your place, and don’t make a fuss.  It’s just the way it is.

As you listen you try to make sense of Jesus’ story and decide you aren’t the landowner distributing money for investment.  You are probably one of the three servants, two of whom were wildly successful and one who was not.  You notice the story says they were chosen according to their ability to handle money.

Being landless, you identify with the servant who has received one coin.  Did you lose your ancestral land because, unlike your fathers before you, you were not as capable as they or are other factors involved?  How do you assess your poverty?  Are you a loser or is the system set up to make and keep you poor?

Having planted yourself in the character of the servant with the least, let’s see what happens as the story unfolds.  “After the man left, the servant who had five valuable coins took them and went to work doing business with them.  He gained five more.”  Then the second servant who had two coins and a very positive attitude does the same, and doubles his money. Your thinking “Yes, maybe I lost the farm because I was not bold enough in my investment strategy.  But on the other hand those of us with few resources have very little chance of success really. I wonder where Jesus is going with his story.”

Jesus finally gets to the servant with just one coin.  He says, “The servant who had received the one valuable coin dug a hole in the ground and buried his master’s money.”  Is the third servant’s decision to bury his coin consistent with your experience?  It certainly is!  In the time of Jesus landowners regularly harvests grain they did not sow and gathered crops where they hadn’t spread seed.  The whole system is set up to the advantage of the landowner and they had the backing of the military.  When peasant risked investing what little they had they almost always lost it.

Given this reality it’s prudent to bury a coin if you wanted to retain it.  Any disenfranchised farmer in the audience would know the third servant was the realistic one.  It’s like the old joke about what a farmer would do if he won the lottery.  The answer, of course, is that he would continue farming for a few more years. From the disenfranchised farmer’s point of view, Jesus at this point, seems to be supporting the oppressive system.

Remember this story is a parable, a puzzle, where the answer is hidden and requires a change in perspective.  The master hears the third servants explanation for why he buried his coin and replies, “‘You evil and lazy servant!  You knew that I harvest grain where I haven’t sown and that I gather crops where I haven’t spread seed?  (Notice, he doesn’t deny the accusation) In that case, you should have turned my money over to the bankers so that when I returned, you could give me what belonged to me with interest.’”  This poor farmer can’t win for losing.  Everywhere he turns he is frustrated, powerless, named a loser and blamed.

The one who sees most clearly, the one who has the best understanding of what is actually going on, is told he is “evil and lazy”.  Isn’t that the way it always is?  Those on top, with an interest in keeping things that way, tell those who see the truth they are evil and lazy.  The more articulate they become in naming the problem the culture wants to hide, the more they are seen as lacking moral character and a sufficient work ethic.

After all, not all of us can be winners in our win and lose economy.  Some of us have to be losers and if you are a loser it is because you are evil and lazy.  You lost because you didn’t play the game very well.  Accept it, embrace it, know your place, and don’t make a fuss.  It’s just the way it is.

Usually preachers say the land owner, the king or whoever is the boss-man stands for God.  They make the parable into an analogy where one thing stands for another.  If we view the story this way, here is God’s next line. “Therefore, take from him the valuable coin and give it to the one who has ten coins.  Those who have much will receive more, and they will have more than they need.  But as for those who don’t have much, even the little they have will be taken away from them.”  Does that feel right to you? It’s an interpretation that presents God as arbitrary and heartless, a supporter of the ever-increasing division between the haves and the have nots.

But what if we have been interpreting this backwards all along? What if the landowner represents the way the world works rather than how God works?  Maybe this is where the parable shifts or our understanding gets subverted.

In the world’s way those who start with the most, get rewarded, praised and included in all the fun while those who start out with the least, lose even the little they have.  Maybe the poor, the meek and the powerless are blessed by God but those with money and power are rewarded by their culture. It’s the way of the world; accept it, embrace it, know your place, and don’t make a fuss.

The master continues, “Now take the worthless servant and throw him outside into the darkness.” Having turned this upside down, it now makes sense. When the world drains its servants of what little wealth they have, it throws them away with disdain.  In fact, it blames them for their poverty and powerlessness. The world doesn’t want to see the poor, the addicted, the broken, the refugees, the jobless coalminers; the landless peasant migrating from Africa or Asia or South America, even though it is usually the world’s system of global economics that have created their plight in the first place.

Throw them into the outer darkness where we don’t have to feel their pain. We don’t want to see them weep in their sorrow or grind their teeth in rage. Maybe economic changes are inevitable but the world doesn’t have to push those displaced out of view.  We who have not been displaced or displaced yet, can keep them in mind and set up systems that respond to them as fellow humans.

If we read this parable with its cruel and inhuman portrayal of the landowner as a lead-in to the next section of St. Matthew’s gospel, as James Alison says we should, we discover Jesus’ response to the cruelty and heartlessness the story portrays.

When the Son of Man comes in his glory, and all the angels with him, then he will sit on the throne of his glory. All the nations will be gathered before him, and he will separate people one from another as a shepherd separates the sheep from the goats, and he will put the sheep at his right hand and goats at the left. Then the king will say to those at his right hand, ‘Come, you that are blessed by my Father, inherit the kingdom prepared for you from the foundation of the world; for I was hungry and you gave me food, I was thirsty and you gave me something to drink, I was a stranger and you welcomed me, I was naked and you gave me clothing, I was sick and you took care of me, I was in prison and you visited me….

Jesus has flipped the world’s story and now the poor are the sheep and those who ignore them become the goats. The kingdom of heaven the parable describes is the reign where this has occurred.  We divide ourselves between those in the kingdom and those out of it by how we respond to those thrown into the outer darkness.

As Jesus shares his parable he knows in a few hours he will be thrown into the outer darkness.  In going to the cross he shares the plight of the third servant who really is a stand-in for all of humanity. In being thrown out, Jesus shows how the world works, in being resurrected he shows us God’s love and in forgiving his extruders he shows that God loves both the extruder and the extruded and grants us all mercy and forgiveness.  Thanks be to God.

November 22, 2017
The Truth About Thanksgiving: Why You Should Celebrate
Next Post

November 27, 2017 Sheep, Goats, and Moving through Hell
Recent Comments
0 | Leave a Comment
Browse Our Archives
get the latest from
Teaching Nonviolent Atonement
Sign up for our newsletter
POPULAR AT PATHEOS Progressive Christian
1