Sheep, Goats, and Moving through Hell 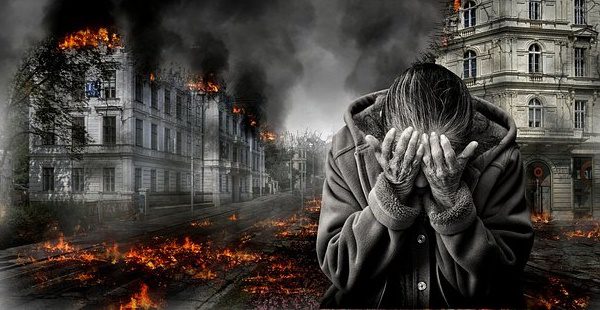 The following is based on a sermon I preached at Clackamas United Church of Christ, in Milwaukie, Oregon. You can read the text or watch the video below.

Jesus tells a story about a cosmic courtroom drama. He sits on his throne as a King and Judge and all the nations come to him for judgment. For Jesus the Judge, there are no opinions in this story. He judges the nations and separates them like a shepherd separates sheep from goats.[1]

In the first century, Jewish shepherds let sheep and goats graze together during the day, then at night the shepherds separated them. In Jesus’s story, he separates the sheep from the goats, only the sheep are a metaphor for the good nations who are blessed and enter God’s kingdom. The goats are those who are accursed and sent into the eternal fire prepared for the devil and his angels.

The criteria for Jesus’ judgment is very interesting. Usually our more conservative Christian siblings say the final judgment will be determined by whether or not someone believes in Jesus. If someone believes the right things, then they are welcomed into God’s kingdom.

But that’s not the criteria Jesus gives for this judgment. He says that the nations will be judged not by what they believe about him, but by how they treat those in need, who Jesus calls, “the least of these.” The sheep may never have heard of Jesus, but they did what he taught. The sheep gave food to the hungry, water to the thirsty, welcomed the stranger, gave clothes to those in need, cared for the sick, and visited people in prison. For, as Jesus said, when we do any of those things to anyone, we do them to Jesus.

This passage has inspired many social activists. It’s led individuals to create soup kitchens and food pantries and clothing drives and homeless shelters for “the least of these.” Why? Because we know that in serving them, we are also serving Jesus. In other words, if you want to find where Jesus is, where God is in the world, don’t look to the powerful. Look to those on the margins. Meet them. Care for them. Develop relationships with them. Because when we do meet them, we are also meeting Jesus.

But the conservative and liberal approach to this story tend to miss an important aspect of this story. That’s because both usually emphasize the individual’s response. But the story isn’t primarily about individuals being brought before Jesus for judgment. It’s primarily about the nations being brought before Jesus for judgment.

The ancient prophets gave a clear warning to their own nation Israel. If the nation, meaning the political, religious, and economic rulers, didn’t care for the poor, the weak, and the marginalized, the nation would fall. And here’s what happened in Israel – the rulers began to amass a tremendous amount of wealth for themselves and they neglected the needs of the poor and marginalized. The prophets said there would be consequences, a day of reckoning. And that day came. First, the Assyrian empire came and destroyed the northern kingdom of Israel. Then the Babylonian empire came and destroyed the southern Kingdom of Judah. The Assyrians and the Babylonians created hell on earth for Israel and Judah.

So, Jesus the Judge stands firmly within the Jewish prophetic tradition when he warns that the nations would fall if they don’t give food to the hungry, water to the thirsty, welcome the stranger, give clothes to those in need, care for the sick, and visit people in prison.

In the Jewish prophetic tradition, prophecy is only partly about future events. It’s much more about the present. Jewish prophecy says, “If you continue down this path, there will be severe consequences. And you will experience those consequences sooner than later. So you better change your ways now.”

The nations of Israel and Judah didn’t change their ways. They acted as goats. So they experienced the consequences of not caring for the poor and marginalized when the Assyrian and Babylonian Empire created hell on earth for them. And just a generation after Jesus was crucified, the leaders of Israel had become goats once again. And the Roman Empire destroyed Jerusalem, creating the fires of hell on earth.

So, I believe in hell. Not so much as a future reality of punishment, but as a present reality. And we are being punished by the hells that we create. All you have to do is open your eyes and you’ll see the violence that has been spreading like the eternal fires of hell since the beginning of humankind.

We see those fires burning now in our country and throughout the world. The previous administration conducted massive drone warfare attacks in the middle east. Those attacks killed an average of 80 civilians a month. That’s bad enough, but the present administration has increased the drone warfare program, which now kills an estimated 360 civilians per month. These are “the least of these” that Jesus talked about. The US drone program dehumanizes innocent civilians, murdering them on large scales, creating hell on earth for them and their families. And we wonder why they hate us?

But this dehumanizing of others can’t be isolated to military action in other parts of the world. It infects our nation. Jesus says to visit those in prison, but the American prison industrial complex disproportionately imprisons African American men, imprisoning them with more severe sentences than their white counterparts for the same crimes. It’s a racist system. Jesus said to care for the poor, but we currently have a tax bill in the Senate that in the long run will hurt the poor and the middle classes, only to benefit the super-rich. Jesus said nations are called to care for the sick, yet many who profess to follow him want to roll back health care advancements. Jesus said to welcome the stranger, but many of his followers would rather deport the stranger. And almost every day we’re discovering how this violent abuse of national power infects some men as their abuse of women is coming to light.

The United States is being judged. We may be a nation that is a goat sent to the eternal fires. But as Alexander Solzhenitsyn once said, the line between good and evil runs down the center of each of us. Maybe the line between the sheep and the goats runs down the center of each of us, and down the center of every nation, too. But here’s good news about fire in the Bible. Fire is a purifying agent. It’s meant to burn up all the bad stuff – all the racism and classism and patriarchy and hatred and violence are burned up so that we can live into God’s kingdom. Sometimes we have to go through the fires of hell in order to be better. But make no mistake. Hell doesn’t have the last word. God’s grace and transforming love have the last word.

So, what do we do? Part of the answer involves reforming our politics. To make America great is to follow the criteria that Jesus laid forth in Matthew 25 for all the nations – to care for the sick and the poor, clothe the naked, not only visit prisoners but set the captives free, welcome the stranger, and feed the hungry.

But we can’t just wait for politicians to enact these policies. It’s up to us as individuals and as a church to do what we can. And you are already doing so much. But we can’t do everything. We are limited. In the midst of these hells on earth, we can do a little bit here and a little bit there. We often think we need to perform extraordinary acts to change things. But that’s not true. What really matters isn’t extraordinary. What matters is ordinary acts of love. A smile. A hello. An act of grace and forgiveness. Resisting the urge to make a snide comment or seek revenge. In all of these ordinary acts of kindness, we participate with God in bringing the Kingdom of Heaven to earth.

[1] For more Matthew 25 and the Nations in this context, see Paul Nuechterlein’s website Girardian Reflections on the Lectionary for Christ the King Sunday.