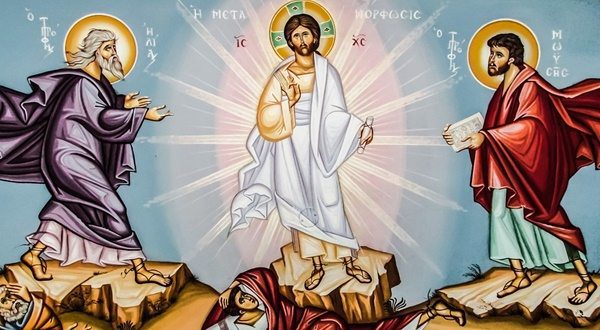 This Sunday is Transfiguration Sunday!

It’s a Christian Holy Day. You know, “holiday.” Like Christmas and Easter, but without presents or candy. Maybe we should give each other bottles of bleach on Transfiguration Sunday…

The texts are 2 Kings 2:1-12 and Mark 9:2-9. “Transfiguration” means transformation, but in a deep spiritual sense. The day comes from the Gospel reading, where Mark tells us that Jesus took Peter, James, and John up a mountain. There they saw Jesus transfigured; “his clothes became dazzling white, such as no one on earth could bleach them.”

Hence the bottles of bleach. Brilliant. I know…

Like a scene from Star Wars where Yoda, Ben Kenobi, and Anakin appear after death to Luke, Moses and Elijah appear on the mountain to talk with Jesus.* I’d love to know what they talked about! But, alas, Mark doesn’t tell us.

What does this have to do with “Nonviolent Atonement”? Many commentators say that the scene means that Jesus is completing the task that Moses and Elijah set out to accomplish. Jesus is continuing their missions.

But what if we are meant to see this not as a continuation, but a contrast? The reading from 2 Kings 2:1-12 is about Elijah never dying, but being whisked up to heaven in a whirlwind. Although Elijah never dies, he does kill. A lot. In fact, in 2 Kings 1, he seems to be feeling especially feisty, so he kills 100 innocent people. And he does this while on the top of a hill.

Earlier in Elijah’s ministry, he challenges the 450 prophets of Baal to a divine duel. The cosmic throwdown went like this: the 450 prophets would cut up a bull and call upon their gods to bring fire upon the bull. Elijah would do the same, calling upon the God of Israel to consume the offering with fire. According to Elijah, “The god who answers by fire is indeed God.”

Elijah’s God brings the heat and the 450 prophets of Baal are left in shame. Then Elijah seized the prophets of Baal, “brought them down to the Wadi Kishon, and killed them there.” And where did the divine duel take place? On a mountain. Elijah went down the mountain to kill.

Then there’s Moses. After receiving the Ten Commandments on a mountain, Moses comes down to discover the Hebrews worshipping a golden calf. He then commands the Levites to “kill your brother, your friend, and your neighbor.” They killed about 3,000 people. Ouch.

I want you to know that I LOVE the Old Testament. More than almost any other book, it reveals the truth about human violence and divine mercy, summed up in Hosea’s statement that God desires mercy, not sacrifice. It’s interesting that God never tells Elijah to kill the prophets of Baal. And Moses claims that God told him to kill the Hebrews, but the ancient rabbis were suspicious. After all, the story tells us a lot about Moses’ conversations with God, but it never lets us in on that conversation. In fact, the rabbis claimed that God didn’t actually tell Moses to kill them. Moses essentially made it up.

Which brings us back to Jesus and the Transfiguration. Jesus came down the mountain with his disciples, but he didn’t come down to kill. In fact, Mark 8 and 9 are a turning point in Jesus’s life. It’s here that he turns his face towards Jerusalem. It’s here that he realizes that instead of killing others to save his life, he would be killed in order to save their lives. He wouldn’t save us from a wrathful god, but from our own cycle of violence.

The Transfiguration is about Jesus transforming into dazzling white, but it’s also about our transformation. It’s about transforming our understanding of God from a violent divine warrior to a nonviolent God of universal love.

*My fellow Star Wars and Bible nerds will know that while Ben Kenobi and Yoda appear to die, Elijah doesn’t die and there’s a Jewish tradition that claims Moses didn’t die.

February 10, 2018 Interview with Carolyn B. Helsel - "Anxious to Talk About It" - Racism in America - The RavenCast
Recent Comments
0 | Leave a Comment
"" … and the Word became Flesh." That "Word made Flesh" is Jesus Christ.Furthermore, if ..."
Ocelot Aardvark Why You Should Run from “Bible ..."
"nice article."
Brandon Roberts The Gospel is Countercultural: Politics, Palestine, ..."
"What cave do you live in?"
Monday's Child The Left Hand of God – ..."
"The best of doctors are destined for Gehenna, and the worthiest of butchers is Amalek’s ..."
Nimblewill The Christian Doctrine that Leads to ..."
Browse Our Archives
Follow Us!