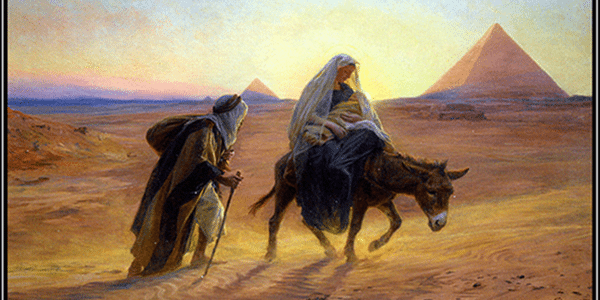 When God walked among us in human flesh, he came as an immigrant and became a refugee. He emigrated from his heavenly kingdom to the earth he created for us as a home. As a child, he fled the wrath of Herod; as a man, the wrath of humanity crucified him. The Incarnation thus reveals to us that God has always stood with immigrants, even becoming one. And we, made in God’s image and called to follow Christ, must ourselves become emigrants, journeying out from our culture of violence and exclusion, out of our culture of judgment and hypocrisy and fear. Our souls must journey into the Way of Everlasting Life, which is perfect, unconditional Love. In that journey, following Christ, we dissolve the walls around our hearts, the artificial barriers that separate us from “them.” There is no “them” when we recognize that we are all members of one body of Love.

God takes human form and goes to the cross to show that, from the foundation of the world, humans have pushed God aside. The Incarnation reveals that the expulsion from the Garden of Eden was the rejection of God by humanity, not the other way around. What Genesis tells us is God’s punishment to Adam and Eve for disobedience is revealed through the trajectory of scripture to be the consequence of a spirit of accusation that slithered into human hearts with the temptation to be “like God.” Rather than receive their identities as reflections of Love, this story tells us first humans sought to carve out their identities as rivals of God. Blinded by desire for power, they pushed Love aside and turned paradise into suffering.  Without taking the story of Adam and Eve literally, one may discern that humanity’s desire to assert ourselves over and against one another, to mis-recognize each other as rivals and cast others out, began with casting out God. As John’s Gospel tells us, “The true light that gives light to everyone was coming into the world. He was in the world, and though the world was made through him, the world did not recognize him. He came to that which was his own, but his own did not receive him.”

Thus, God from the beginning has walked with those displaced, for God was first displaced by human misjudgment and violence. And our poor judgment continues to push God aside as we fail to recognize God’s image in others. Poor human judgment is written in blood in wars and lynchings, in pogroms and deportations. We projected our own violence onto our image of God and thus have distorted ourselves as God’s living images. When we blasphemously invoke the name of God to dehumanize others, we lose our own humanity.

To follow the Truly Human One is to become an emigrant, for it is to follow Jesus out of our cultural violence, out of our distrust of others, out of the limited distortion of love we invoke when we believe that care for some must necessarily mean judgment against others. Jesus, who wraps his arms around those who seek refuge from war or poverty or hate, Jesus, who consoles those forced away from their loved ones, Jesus, who walks with emigrants on their journey – this Jesus leads us all on a path to a new life. Even as he comforts the immigrants in their new lands, he pulls others from their comfort zones of exclusion into a space where all are welcome. Some feel uncomfortable welcoming in the stranger, the immigrant, the outsider, but if we belong to the Body of Christ, we cannot define ourselves over and against them. There is no outsider, and the place of welcome is not ours to claim, it is Christ’s. Exclusion, borders, and walls, to which so many of us cling for safety, for a boundary to define who we are against others, has no place in the Body of Christ.

In one week, we will observe Christ’s crucifixion. Christ’s final hour was the culmination of all of humanity’s violence, fear, hatred, and judgment. The greed, violence, and dehumanization that drives many people from their homes or keeps the world from being a home to those who seek refuge, all of this is encapsulated in Jesus’s death. All the pain and grief and isolation endured by those who must leave their homes or be separated from their families because of war, violence or poverty only to be rejected by a cruel and fearful world was condensed into Jesus’s dying body. Thus, Christ fully embodies solidarity with the immigrants and refugees of the world, and they embody solidarity with him.

In one week, congregations throughout the world will reenact the trial of Jesus and re-create the violent human judgment that cast Love enfleshed from our world. May those of us who claim ownership of the land we inhabit, who deem others “illegal” for crossing an artificial border created by violence and greed, hear the echoes of “Build that wall!” as we shout “Crucify him!” For Good Friday is about recognizing our own spirit of judgment and exclusion, a spirit of self-righteousness over and against others that culminated in casting the One who created the world for us from the world we distorted with our violence. When we re-inact the mob that demanded death, we recognize and claim the sins that crucified Jesus as we fix our eyes on the cross. We look upon our violent origins and acknowledge our journey, and the distance yet ahead of us, as we follow Jesus out of the culture of violence that pushed first pushed him aside.

In looking upon Jesus, we are called to recognize the humanity of all whom we have dehumanized. In recognizing our violence and the humanity of those we violate, we journey into the forgiveness that the Truly Human one pours out from the cross, immigrating into a restored humanity where all are forever embraced in Love.

March 23, 2018
The Spirituality of Pope Francis, Fake News, and Holy Week – The RavenCast
Next Post

March 26, 2018 Palm Sunday: Marching for Our Lives
Recent Comments
0 | Leave a Comment
Browse Our Archives
get the latest from
Teaching Nonviolent Atonement
Sign up for our newsletter
POPULAR AT PATHEOS Progressive Christian
1