Palm Sunday: Marching for Our Lives 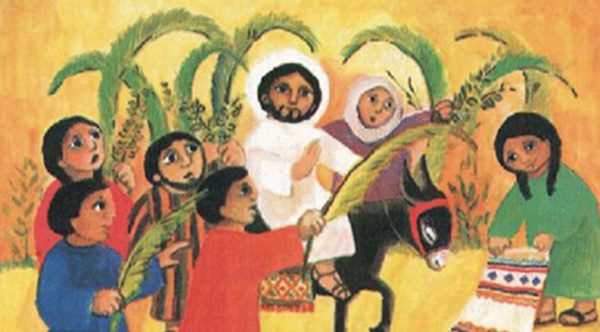 The following is a monologue sermon I preached at Clackamas United Church of Christ, near Portland, Oregon. It compares the March for Our Lives with the march on the first Palm Sunday. The text was Mark 11:1-11. The video recording of the sermon is below, along with the text.

We marched on that day. Oh did we march!

We marched for our lives because the Romans only gave us death.

Many of my friends were killed. My children lived in fear because the Romans came and if they felt that we were doing anything wrong, they killed us. They took out their swords and they murdered us.

But it didn’t really matter if we did anything “wrong.” All that mattered was that the Romans kept the “peace.”

They had a slogan. “Peace through strength.”

It didn’t work then. It has never worked in the history of humankind.

We had a technical term for that phrase. Bull…oney. Yeah. That’s what we called it. We Jews, we didn’t eat bologna. Because that stuff is made of pigs. But we could smell it from a mile away.

And so we marched.

And so we waved the palms as a subversive political statement.

And you know what else we did? We took off our cloaks and we laid them before Jesus. He rode in and we laid our cloaks before him as he road in on that donkey. And we did this because the road was dirty and we wanted to keep him clean. But you would never put your cloak on the dirty road for just anyone.

Peace through strength? No. Jesus came in riding on that donkey and he said, “Peace I leave with you. But I do not give peace as the world gives peace.” And do you know what the peace of Christ looks like?

Sometimes in a world that’s hell-bent on violence, you may need to take that violence upon yourself and offer divine love in return. That’s the way that Jesus brings peace. That’s the way to true peace. Not as the world gives. But as God gives.

We marched that day. And when we marched, it was a political rally with a radical spiritual message. You see, Caesar called himself the “Son of God,” “Prince of Peace,” “King of Kings.”

The political and the theological came together in the Roman Empire. And it was a theology and a political ideology that lead to conquest.

Another slogan of Caesar’s was “I came. I saw. I conquered.”

Well congratulations Caesar. But we Jews had hope in our God. Our God is the true God of the Exodus. And so when we got to Palm Sunday, we were marching for the Passover. 200,000 of us were there for Passover every year, celebrating the God of the Exodus.

Our ancestors were enslaved to the Egyptian Empire and they cried out to God and God delivered them. That’s how God works. The one true God is the God who hears the cry of the oppressed. God is the God who works for their deliverance.

God gives us freedom. But the freedom isn’t just for ourselves. It’s the freedom to share God’s love with the world.

And so when he came in on that donkey, we chanted, “Blessed is the one who comes in the name of the Lord! Blessed is coming kingdom of our ancestor David!”

David was our greatest king. Jesus was the one who would come and be like David. He would lead us into a greater future.

You could say that about any weapon. Put it back in its place. That’s what Jesus said. That’s the way toward peace.

Because there are primarily two ways to live in this world.

Sometimes it means that you realize there’s something more important than the desire to be right. Sometimes realizing this “something greater” means that we need to die to winning the argument. And it may mean that we need to live towards a resurrected life that works for justice and at the same time loves all people. Including those we call our enemies.

March 23, 2018
Following Jesus: Emigrating from Violence into Love
Next Post

"All People Are Holy": The Theology...
Mercy Not Sacrifice
Related posts from Teaching Nonviolent Atonement