The Good Shepherd Who Cares for the Man Born Blind

The Good Shepherd Who Cares for the Man Born Blind April 25, 2018 Tom Truby 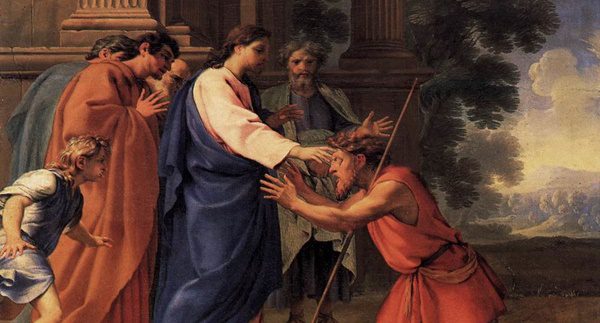 Their sin, the thing that made them blind, was thinking themselves able to distinguish who was good and who was evil.

The Good Shepherd Who Cares for the Man Born Blind

It all started with a blind man Jesus healed.  Jesus healed him to show his disciples that the man’s blindness had nothing to do with sin, punishment or blame.  He was just born blind.

Apparently the creator ran short of creative mud so the eyes didn’t get finished.  This is why Jesus mixed some of his saliva with earth, the stuff from which Adam was made, to make mud.  Jesus then pasted it over the blind man’s eyes and with the missing mixture no longer missing, the man suddenly could see.  Jesus finished God’s creation, something he did during Holy Week, on another level.

This was Jesus’ way of saying he and God worked together, they worked for the completion and benefit of all and that the idea of blindness as some sort of Divine blame, retribution, or reason for the exclusion of those persons so afflicted was pure B. S. That means falsely benefiting society by creating a temporary peace built on excluding the weak, the vulnerable and the different while blaming them for their own exclusion.

Well, those in authority found the idea that Jesus could be working with God impossible to swallow so they initiated an investigation. They talked to the man’s parents who confirmed he had been born blind, and they talked to the man himself who also said it was true.

Of course, everyone had their own take on this increasingly public event.  Gossip, the social media of the day, picked it up and soon some Pharisees where saying, “This man is not from God, for he doesn’t observe the Sabbath.” After all, the healing occurred on the day of rest, proof that God had nothing to do with it. Others said, “How can a man who is a sinner perform such signs? And they were divided.” This was getting dangerous as the unity of their culture was eroding and Jesus was behind it all.

Well, this thing just kept heating up as the friction of the various segments of their leadership structure rubbed against each other. They decided to call the formerly blind man for a second hearing. This time they put him under oath by saying, “Give glory to God!” and then they tell him what to say that will please them. It isn’t exactly a fair trial since they provide him the expected answer before he has a chance to testify.  Essentially they are saying you had better support us on this or you will be in big trouble.

I have always been amazed at the man’s courage. Had his being different all those years enabled him to see the truth the majority could not? He ignores their instruction and contradicts what the prosecutor clearly wants him to say. He diplomatically answers, “I do not know whether he is a sinner but the one thing I do know, that though I was blind, now I see.”

They don’t like his answer and pepper him with more questions.  He grows impatient as he can see this is not about determining truth but rather protecting power and privilege. When they again ask how this happened he answers with some irritation, “I have told you already, and you would not listen.  Why do you want to hear it again? Do you also want to become his disciple?”

His question draws their venom to the surface. They answer, “You are born entirely in sins, and you are trying to teach us? And they drove him out.”

Later Jesus found the man and asked him if he believed in the Son of Man. When the man said he did and worshipped him, Jesus replied, “I came into this world for judgment so that those who do not see may see, and those who do see may become blind.” I think Jesus is saying we judge ourselves by how we respond to Jesus.

Some of the Pharisees overheard Jesus and said to him, “Surely we are not blind are we?”  A crack appeared in the certainty of their righteousness—a small light shown through the blackness of their blindness.

“Jesus said to them, ‘If you were blind you would not have sin.  But now that you say ‘We see,’ your sin remains.”  Their sin, the thing that made them blind, was thinking themselves able to distinguish who was good and who was evil.

There was an Associated Press story in the Oregonian on Friday about the two young men arrested in the Philadelphia Starbucks restaurant for being black, sitting at a table and using the restroom before buying coffee. They were waiting for a third person, a white man, to arrive, so they could have a business meeting. By the time the third man arrived, the first two men, both black, were in handcuffs.  They did not resist arrest and were taken to jail though the third man confirmed the truth of their story.

Like those born blind we often assume those born black carry suspicion and must be kept apart.  Our sin is in the dividing of us and them.  The dividing shows us to be blind and our residence the actual place sin resides.

Rashon Nelson, one of the two young men, in reflecting on his experience with reporters said, “We do want to make sure it doesn’t happen to anybody again. What if it wasn’t us sitting there? What if it was a kid that didn’t know somebody that knew somebody that knew somebody? Do they make it to jail? Do they die? What happens?.…When you know that you did nothing wrong, how do you really react to it? You can either be ignorant or you can show some type of sophistication and act like you have class.  This is the choice we had.” In a final class act Robinson said he “appreciated the public support but that anger and boycotting Starbucks are not the solution.”

The Pharisees didn’t see the blind man as in their care. He was like one of those sheep that gets sacrificed on the altar of cultural cohesiveness.  Jesus, however, sees himself as the good shepherd. His special domain is the welfare of those sheep and their human counterparts headed through the gates that lead to their violent and sacrificial death on the temple altar.

When the gates open he goes through with the sheep. He is involved. He cares. The sheep know his voice and he knows his sheep.  When the wolf of violence appears the hired man runs. He abandons the sheep and they are ravaged and scattered.  He won’t lay his life down for the sheep.  He doesn’t enter the sheepfold through the gate of love, co-suffering and self-sacrifice. The hired man climbs in over the fence and takes no permanent residence among the sheep.  When violence threatens he climbs back over the fence and hides.

The hired man is just a hired hand and has little capacity to identify with the sheep.  They don’t even belong to him. He won’t lay down his life for the sheep and he doesn’t believe he has the capacity to pick his life up again if he were to lay it down.

There is nothing violence can do to thwart what we are discovering. Jesus’s willingness to take this route is the reason the Father, who created us all, loves him.  As the world hears about this fundamentally anthropological rather than sectarian religious response to violence, they too hear the voice of the nonviolent good shepherd and they are drawn to it.  When the world hears this voice it will listen and Jesus’ purpose will be achieved.  Amen.

April 27, 2018 Does Facebook Fuel Revenge? - The RavenCast
Recent Comments
0 | Leave a Comment
"Great reflect. Makes me think that I've heard it said that the 3 most powerful ..."
Mark Zaegel Toxic Christianity: 3 Things We Can ..."
"Christianity becomes toxic when it allies itself too closely with any extraneous political or social ..."
Harold Porter Toxic Christianity: 3 Things We Can ..."
"I hope that the day will come when there will be a deeper and more ..."
David B. Miller Is Pacifism A Luxury?
"I often wonder about the parable of the good Samaritan. What if, in Jesus' story, ..."
Newton Finn Is Pacifism A Luxury?
Browse Our Archives
get the latest from
Teaching Nonviolent Atonement
Sign up for our newsletter
POPULAR AT PATHEOS Progressive Christian
1