Why Evangelicals Are Hypocrites and So am I 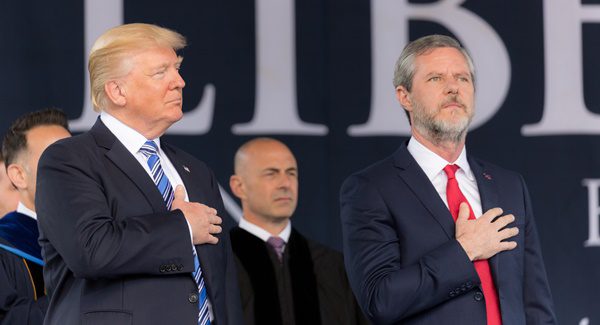 According to a poll released yesterday by the Public Religion Research Institute, “white Evangelical support of President Trump is at an all-time high, with 75 percent holding a favorable view of the president and just 22 percent holding an unfavorable view. This level of support is far above support in the general population, where Trump’s favorability is at 42 percent.”

Evangelical support for Trump remains high despite the allegations of an affair with Stormy Daniels. And, well, despite so much more. President Trump puts Evangelicals in spiritual crisis. Prominent Evangelicals like Tony Perkins and Jerry Falwell Jr. emphasize the importance of morality in public life. They castigated Bill Clinton for his affairs, but they give Donald Trump a pass for his moral indiscretions.

As a progressive Christian, I think it’s important that we hold on to the word “sin.” Yes, it’s an ugly word that has been abused by many Christians who use “sin” to condemn others. They point their fingers against others, claiming those others are living a life of sinful immorality because they are living contrary to the will of God.

It would be so easy for me to mirror our Evangelical siblings in pointing my finger against them for supporting Trump despite his immortality. I’m tempted to claim that their fervent support of Trump is hypocritical and stems from the fact that they are living under sin.

I’m tempted to make that claim because I believe it’s true. For Evangelicals to attack Bill Clinton for his moral failures yet give Donald Trump a free pass is hypocritical and sinful. David Brody, co-author of the book The Faith of Donald Trump, states that, “Evangelicals believe in the grace principle; they’re willing to allow him grace.”

I love grace. I think we live by grace. We need more grace in the world. In Jesus we receive grace upon grace, not because we deserve it, but because Jesus freely bestows it.

But the Evangelical faith crisis stems from a misunderstanding of grace. Grace isn’t just for the people in our group or for those we support. It’s for everyone.

So yes. Grace is for Donald Trump. It’s for Bill Clinton. It’s for Evangelicals. It’s for atheists and theists and conservatives and liberals and Syrians and presidents and dictators and you and me.

And yet there’s also a place for calling out evil and sin and oppression wherever we see it. After all, Jesus had some harsh words for those who opposed him, even calling them a brood of vipers. But as we call out sin, it’s important to remember Jesus’ question,

Some think Jesus’ statement means we should only deal with the log in our own eye. But notice that Jesus doesn’t just leave it there. He says that there’s still a speck in your neighbor’s eye, but before you do anything about their speck, you must first do the difficult and painful work of taking the log out of your own eye.

I believe the Evangelical claim that we all fall short of the glory of God because of sin. I have a log in my eye, but I’d rather not do the painful work of taking it out. I’d rather emphasize the speck in my neighbor’s eye because when I do I get distracted from that painful log in my own eye.

And it’s why we need more grace. Having more grace for ourselves when we discover that massive log in our own eye enables us to have more grace for others. Because on some level, to be human means to find ourselves acting like hypocrites. For example, when it comes to politics, I often give people on my side a pass I would never give to the other side. This is hypocritical and it’s human.

And when we fall into that trap, we could all use a little more grace from the other side.

April 20, 2018 Drinking the Cup of Poison: What Jesus Christ Superstar Gets Wrong About Gethsemane
Recent Comments
0 | Leave a Comment
Browse Our Archives
Follow Us!