Seven Stories Book Review, Part 3: The Land and Its Loss 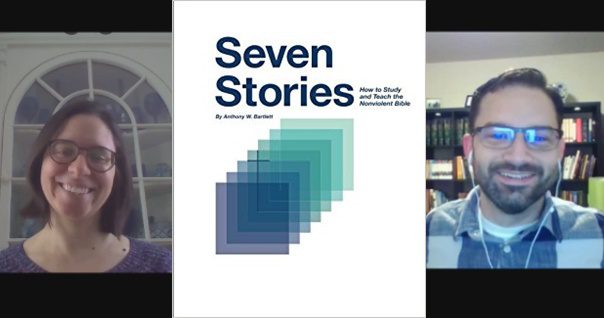 In this episode of the RavenCast, Lindsey Paris-Lopez and I discuss the third chapter of Anthony Bartlett’s latest book Seven Stories: How to Study and Teach the Nonviolent Bible. You can watch the video of the conversation below, or listen to the RavenCast on iTunes, Stitcher Radio, or Podbean.

The Hebrews left Egypt in the great story of the Exodus. But where would they go?

The land was a given as a gift from God, but now it had been taken away from them. And the ancient Jews were left with a question, “Why was the land taken away?

The Bible reveals that they came up with many answers to that question. The most dominant answer was from Deuteronomy, whose ideas influenced many other books of the Bible. The basic idea was that they lost the land because God was punishing them for sins.

But other authors in the Hebrew Bible, such as Job and Ecclesiastes, say that God doesn’t punish people for sins.

The argument continued during the first century. The Pharisees, Sadducees, Zealots, and Essenes each had different responses to the problem of the land.

The Pharisees thought that if people remained pure and followed the law better, God would protect them from the Roman Empire. The Sadducees emphasized worship at the Temple. The Zealots thought they needed a violent Messiah to defeat Rome and kick them out of the land. And the Essenes left the land for the desert and waited for God to defeat the powers of evil in a cosmic battle.

Jesus had an alternative response. He didn’t emphasize purity. Instead, he ate with sinners and tax collectors. He interpreted the law differently, but always in a nonviolent way.

Near the end of the conversation, Lindsey discusses her article “The Land and Its Promise for Palestinians and Israelis.”

April 16, 2018
Jesus, Stephen Colbert, and the Resurrected Life
Next Post

April 19, 2018 Why Evangelicals Are Hypocrites and So am I
Recent Comments
0 | Leave a Comment
Browse Our Archives
Follow Us!