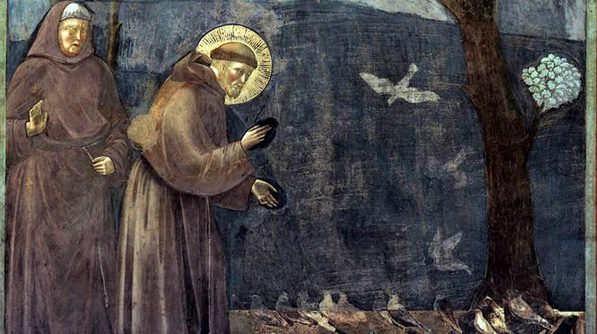 The following is a sermon I preached at Clackamas United Church of Christ, near Portland, Oregon.  The service was the Blessing of the Animals. I preached as St. Francis. You can read the sermon or watch the video below.

There I stood, naked before my father, the bishop, and the whole town of Assisi.

I was there, naked, because my father sued me because I was a man of God. And he was a man of wealth. He had all the money in the world. He lived in a luxurious house. He had power and prestige throughout the town of Assisi.

I was born Giovanni di Bernadone in Assisi, Italy. I grew up the son of a wealthy merchant. He was one of the richest men in all of Assisi. And do you know what I did with my father’s money as a young man? I threw the greatest parties you have ever seen! I was loved by everyone because I gave them a good time. Booze. Women. Men. They all came to my parties and we had so much fun. Do you know what they called me? They called me the King of the Party.

But these parties always left me empty inside. Certainly, there was more to life than parties, right?

My Dad always encouraged me to follow in his footsteps and join the family business. My Dad always called me Francis because he liked France. It was where he bought all his luxurious silk linens to sell to the people. In fact, he was in France when I was born. After my mother named me Giovanni, my father immediately started calling me Francis in hopes I would follow in his footsteps. He hoped I would continue the family tradition of making big money by going to France and bringing silk back to sell to the people of Assisi. He said to me, “Francis, follow in my footsteps. It will be a good life for you.”

But money left me empty inside. Certainly, there was more to life than money, right?

I kept searching to fill the emptiness inside of me. During my time, there were a lot of wars. Civil wars in Italy and the Crusades against the Muslims. I thought maybe going to war would give me the glory I desired! So I went with the men of Assisi to war against a neighboring town. I was quickly captured and held for ransom in a dark dungeon. During my year of captivity, I became very sick. Soon I had visions from God, who told me to put away my sword and my money and the parties and go back to Assisi.

My father paid my ransom and after a year I was set free. God told me that I should put my old life behind me, but I didn’t know what I was supposed to do now. So I walked the countryside and I entered an abandoned church named San Damiano. I knelt before the cross in prayer. God came to me and said, “Francis, can’t you see the Church is in ruins? Go and rebuild my Church.”

So I went back home and took my fathers linens to sell. When I made enough money, I gave some to the poor and I gave the rest to help rebuild San Damiano.

When my father found out, he took me to court. He said, “Francis, I am so disappointed in you. You stole my money. I’m going to take you to court and sue you for the money and the clothes you took from me.” Well, all my clothes came from my father’s store, so I took off the clothes I was wearing and I handed them back to him.

Because that’s where his obsession with wealth led him. It leads to making others naked and vulnerable. I left naked and renouncing my father’s wealth. Renouncing a life of privilege. And saying that my true Father is the one who art in heaven. I will follow that Father for the rest of my life.

I then went to the leper colony. My whole life I avoided that place. It smelled of death and decay. But I ran there as fast as I could. I held them in my arms and I washed their wounds. I told them of God’s love and in them I saw the beauty of God – that God loves all people, especially the poor and the lepers.

One day I was in Assisi preaching to the people. They were bored and not paying attention. It was no my best day. In frustration I lifted up my arms and yelled, “I might as well be preaching to the birds!” Suddenly, a bunch of birds flocked to me. It was as if they came to listen to me preach! Ever since then I loved all creation, including animals.

Later, I heard that a neighboring town was being terrorized by a wolf. I was sure I could make peace between the people and the wolf. So I went with my followers into the forest to find the wolf. As we went deeper and deeper into the forest, my followers scattered until I was alone. Soon I came face to face with the wolf. He lunged toward me and I lifted up my hand to bless the wolf. He stopped as I said, “God bless you, Brother Wolf.” He then listened to me as I asked him why he was terrorizing the town. He told me that he was hungry and the people were encroaching on his territory and hunting his food. All he wanted was to eat.

Of course, the event with the wolf wasn’t just about the wolf. It was about our human relationships. For near the end of my life, the Church was on another Crusade to take the Holy Land back from the Muslims. All of this war was pointless. So I traveled across the desert to the Sultan of Egypt to preach to him.

I told him that Jesus wants us all to stop this violent war. He told me that I should become a Muslim. I knew that this would get us nowhere, so I told him that I love all creation. The Sultan replied, “Yes, Francis, but do you love even men, your enemy?” “Yes,” I replied. “I love you.”

The Sultan said, “Francis, if every Christian were like you, I would gladly become one.”

I left the Sultan, without having brokered peace. On my way home, I witnessed my fellow Christians raping Muslim women and killing civilian men and children. When I got home, my followers abandoned a life of poverty and began living with more and more luxury.

My heart broke. My whole life I sought to rebuild God’s church. And here at the end of my life, there was no peace. The movement that began in my name rejected my teachings. I felt like a total failure.

But then my dear friend Clare told me that God didn’t call me to rebuild a literal church. God called me to rebuild the church that exists in everyone’s heart. There’s a cathedral in your heart. In my heart. And in the heart of every creature. For that’s where God dwells.

May you open the door to the church in your heart.

May you find peace in that church.

And may you love one another and all of creation even more. Amen.

August 24, 2018
Two People Fell In Love. And The World Is A Better Place For It.
Next Post

September 4, 2018 So that You May Live: Staying Present In an Age of Despair
Recent Comments
0 | Leave a Comment
Browse Our Archives
get the latest from
Teaching Nonviolent Atonement
Sign up for our newsletter
POPULAR AT PATHEOS Progressive Christian
1